Ticket availability is limited. The Museum's new January hours are THUR-MON 10 AM-4 PM, closed TUES and WED.
Please reserve your timed ticket by phone at 615-416-2001 or by clicking here.

We Could: The Songwriting Artistry of Boudleaux and Felice Bryant

During their distinguished careers, Country Music Hall of Fame members Boudleaux and Felice Bryant composed more than 6,000 songs, and more than 900 were recorded by artists working across genres. Among their many hits: “Bye Bye Love,” “Wake Up Little Susie,” “Country Boy,” and "Rocky Top."

The Country Music Hall of Fame and Museum tells the story of Nashville’s first full-time professional songwriters in the exhibition We Could: The Songwriting Artistry of Boudleaux and Felice Bryant. Filled with artifacts and details that span from childhood through their major musical successes, the exhibition illuminates the Bryants' personal and professional lives, including their groundbreaking music-industry moves and remarkable love story.

During their distinguished careers, the Bryants sold over half a billion records by one estimate, received 59 BMI awards and composed more than 6,000 songs, of which over 900 were recorded, by artists working in many different musical genres, including country, rock & roll, pop and R&B. Among the Bryants’ hits were the Everly Brothers’ “Bye Bye Love,” “Wake Up Little Susie” and “All I Have to Do Is Dream.” Additionally, their works include Little Jimmy Dickens’ “Country Boy,” Jim Reeves’ “Blue Boy” and Roy Orbison’s “Love Hurts,” which later became an international hit for the rock group Nazareth. The Bryants also wrote “Rocky Top,” a bluegrass standard named one of Tennessee’s state songs and a favorite at University of Tennessee sporting events.

A love of music and a chance meeting at a Milwaukee hotel brought the Bryants together. They were married in September 1945 and began singing together throughout the Midwest and Georgia. During this time, they began writing songs. One of those songs was “Country Boy,” which they shared with singer Rome Johnson, who sent it to music publisher Fred Rose. Rose placed the song with Grand Ole Opry star Jimmy Dickens, who made it a #7 hit in 1949. Rose became the Bryants’ mentor, encouraged them to move to Nashville, and helped the couple assemble an impressive catalog of hits in the coming years.

The Bryants were more than successful songwriters. They also established an influential benchmark for songwriters when, in 1957, they negotiated a 10-year deal with music publisher Acuff-Rose that returned to the Bryants all publishing rights for their songs at the end of the agreement— the first of its kind in Nashville. During this time, the Bryants began writing for Acuff-Rose client the Everly Brothers. The Everly Brothers recorded 29 Bryant songs, including “Bye Bye Love,” “Wake Up Little Susie,” “All I Have to Do Is Dream,” “Bird Dog” and “Devoted to You.”

In 1967, in accordance with their contract, the Bryants began reclaiming domestic copyrights for the songs they wrote for Acuff-Rose and moved the titles to their House of Bryant publishing company. Today, House of Bryant, owned by the Bryants’ sons, Dane and Del, continues to thrive.

Items featured in We Could: The Songwriting Artistry of Boudleaux and Felice Bryant include handwritten lyrics, music and personal artifacts. Some highlights: 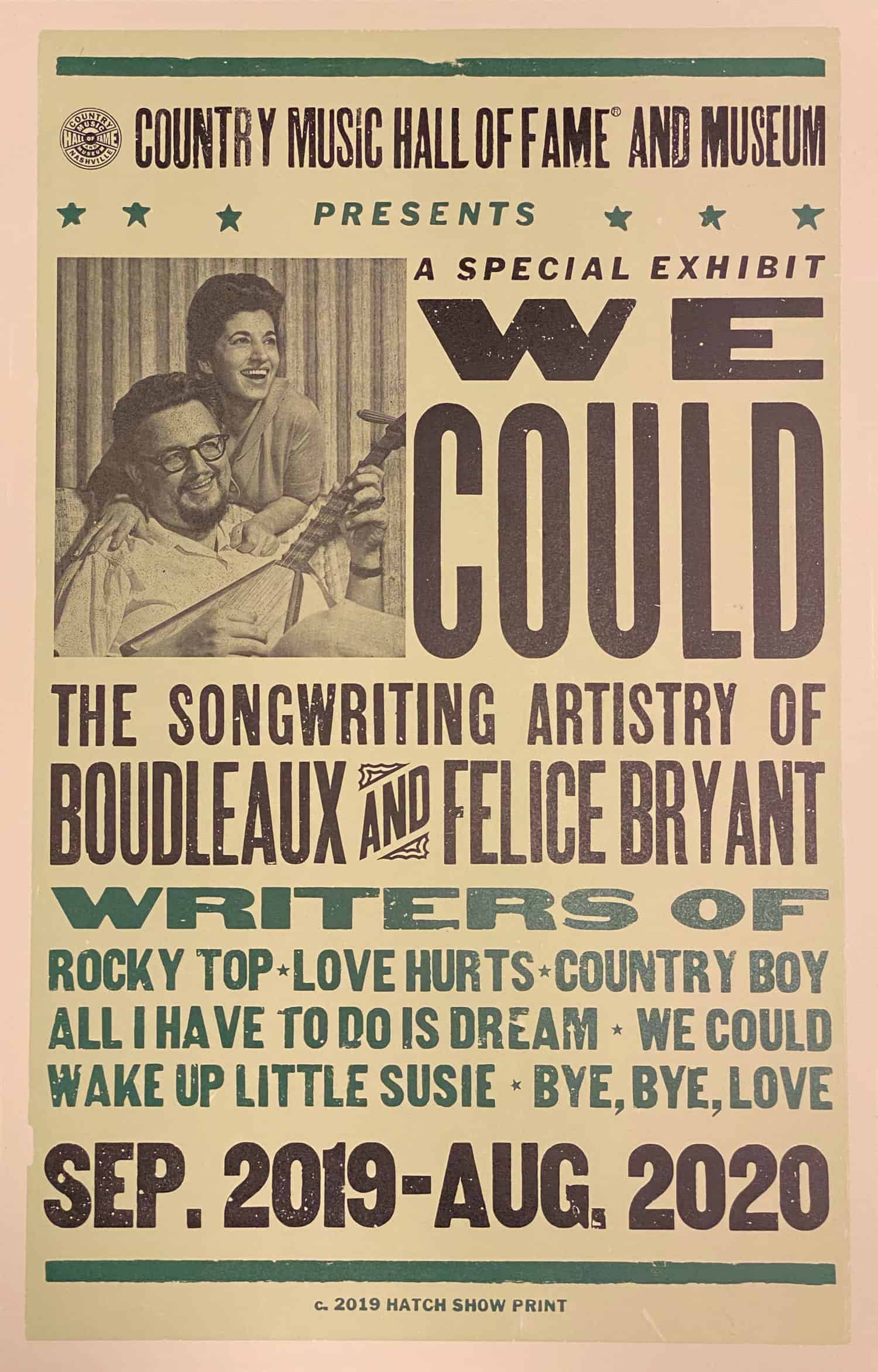 Hatch Show Print designed this poster for the exhibition's 2019 opening.