DeFord Bailey was an influential harmonica player in both country music and blues, one of the Grand Ole Opry’s most popular early performers, and country’s first African-American star. 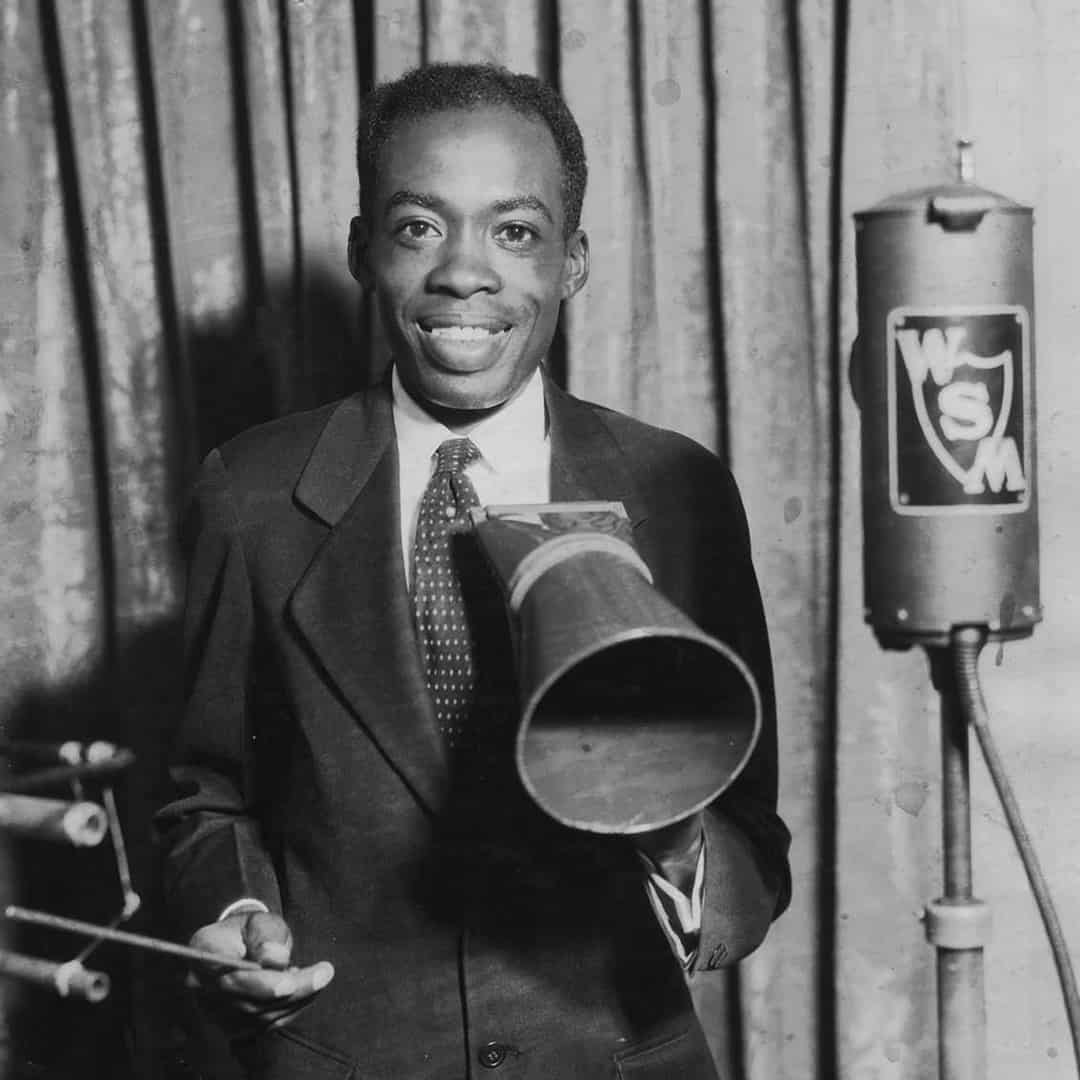 Born December 14, 1899, into a farming family in rural Smith County, Tennessee, Bailey lost his mother soon thereafter, and his aunt Barbara and her husband, Clark Odum, became his foster parents. Polio, which struck Bailey at age three, stunted his growth and left his back somewhat bent, but what he lacked in physical stature he made up for in talent and determination. As he later explained to researcher David Morton, he began learning harmonica as a young child: “My folks didn’t give me no rattler, they gave me a harp.”

Bailey grew up in a musical family who played what he called “black hillbilly music,” a tradition of secular string-band music actually shared by rural black and white musicians alike. He also learned songs in church, and developed a keen ear for the music he heard around him: the chugging of trains, the baying of hounds chasing foxes, and the sounds of animals on the succession of farms Clark Odum managed in Davidson and Williamson counties. Bailey moved to Nashville in 1918 and spent the next six years working odd jobs, including stints as a houseboy, drugstore helper, and elevator operator. Meanwhile, he learned jazz, blues, and pop songs from recordings and from live shows he attended in local theaters. In doing so, he became a bridge between rural folk music and the modern world of commercial popular music.

A trip to Dad’s Auto Parts to buy parts for his bicycle (his principal means of transportation) led to his meeting store owner Fred “Pop” Exum, who was fascinated by Bailey’s harmonica playing and began featuring him on radio station WDAD once Exum launched the enterprise in mid-September 1925. Here, Bailey met harmonica player and string-band leader Dr. Humphrey Bate, a kindly country doctor from Castalian Springs, Tennessee, who began performing over Nashville’s powerful WSM not long after its October 5, 1925 debut. Within months, confident in Bailey’s ability, Bate persuaded Bailey to come with him one night to appear on the show then called the WSM Barn Dance, and then convinced station manager George D. Hay to let Bailey perform without an audition. By June 1926, Bailey was making regular appearances, and Hay soon dubbed him “The Harmonica Wizard.”

Indeed, Bailey was a dazzling performer, whose renditions of “Fox Chase,” his train song “Pan American Blues,” and other tunes became instant hits. For the next fifteen years, he remained one of the program’s best loved—and best paid—stars.

In 1927, Hay spontaneously renamed the Barn Dance while introducing some of his down-home musicians on a WSM weekday evening broadcast following a classical music program. Countering the view that “there is no place in the classics for realism,” Hay said, “[W]e will present nothing but realism. It will be down to earth for the ‘earthy.’” As if to illustrate his point, Hay introduced Bailey, whose “Pan American Blues” recreated the whoosh of the L&N Railroad express train he had heard from his boyhood. In his introduction, Hay also said, “For the past hour, we have been listening to music largely from Grand Opera, but from now on, we will present ‘The Grand Ole Opry.’” Thus Bailey and his musical cohorts helped to inspire the name of America’s longest-running radio show.

In 1932, WSM’s power jumped to 50,000 watts, giving Bailey an audience stretching from the Rocky Mountains to the eastern seaboard, and scores of amateur and professional harmonica players—black and white alike—eagerly listened to his performances. Players also studied the records he made for Brunswick and Victor Records—the latter made in 1928 in the first major label session ever held in Nashville. Personal appearances with other Opry members across the South and Midwest further extended his influence. On the road, the expert showman sometimes picked guitar (in his left-handed, upside-down style), did yo-yo tricks, and enhanced his harmonica tunes by beating rhythm with sticks or bones.

Bailey’s radio career came to a halt in 1941 in the midst of a dispute between the radio industry and the American Society of Composers, Authors, and Publishers (ASCAP), over licensing fees ASCAP charged radio stations for broadcasting its members’ songs. With no contract in place for most of that year, radio could not broadcast ASCAP-licensed songs without incurring heavy fines, and WSM warned Bailey against playing his ASCAP numbers, some of which were audience favorites. Station and performer remained at loggerheads, though, and WSM finally let Bailey go late that year.

Understandably angry, Bailey gave up professional music and henceforth made his living operating a shoeshine parlor and renting rooms in his home. Rare guest performances on the Opry gave listeners occasional glimpses of his former heyday. Through it all, he refused to become embittered, and stressed the importance of keeping “a good heart.” Whether onstage or off, Dr. Charles Wolfe noted, Bailey’s life was “a parable of integrity and survival” that continues to inspire country artists and their fans.

DeFord Bailey: A Black Star in Early Country Music, an informative biography written by David Morton with Charles Wolfe, was published by the University of Tennessee Press in 1991.  -Charles K. Wolfe