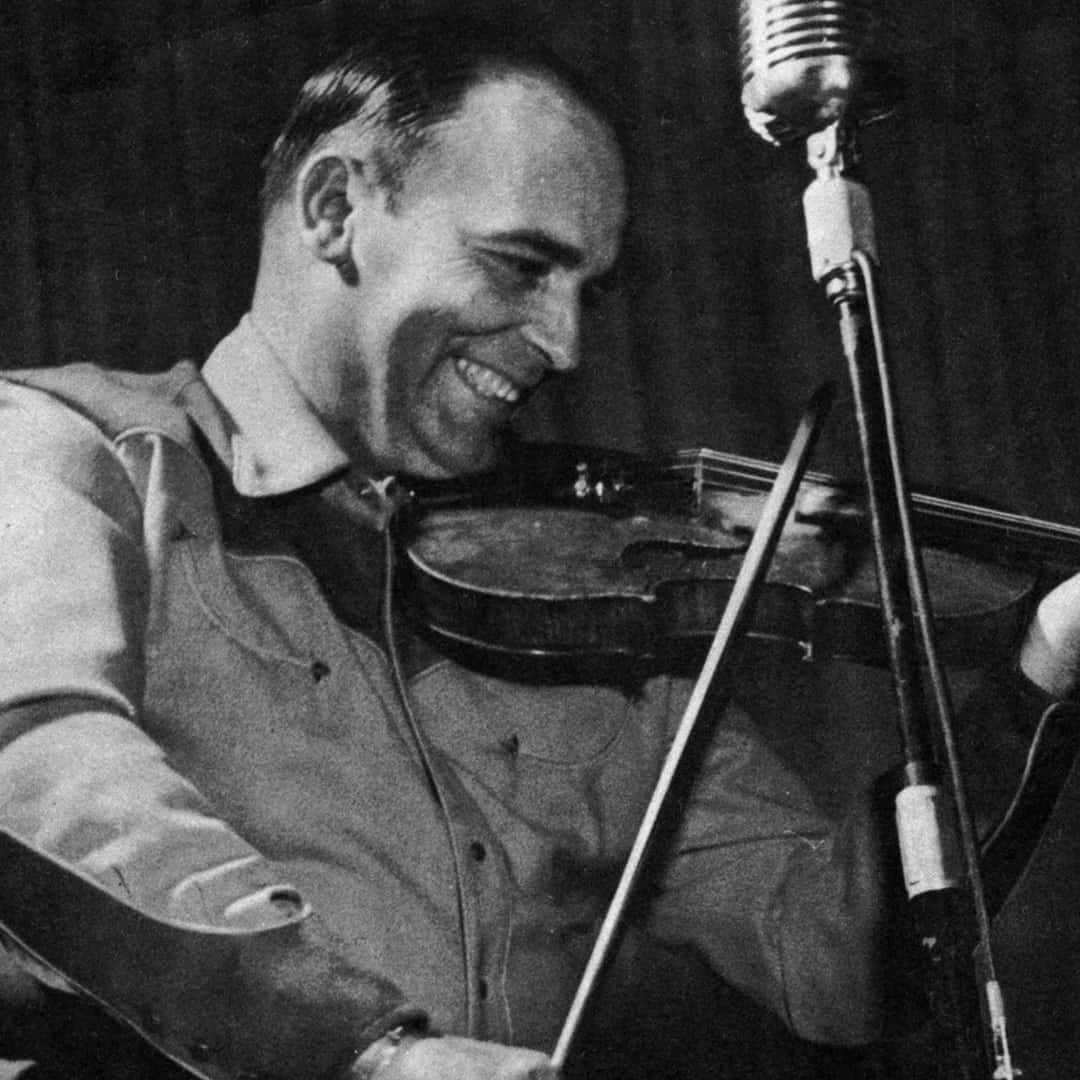 Wills blended it all into a swinging dance music that was wildly popular in the Southwest and on the West Coast from the 1930s into the 1950s. His greatest success was with his Texas Playboys band while based at KVOO in Tulsa, Oklahoma, between 1934 and 1942. Today his compositions, such as “Faded Love,” “Maiden’s Prayer,” “Take Me Back to Tulsa,” and “San Antonio Rose,” are considered standards of country and pop music.

Take Me Back to Tulsa – Bob Wills

James Robert Wills grew up in a musical family of fiddle players and in an area famous for African-American music that produced Scott Joplin, Victoria Spivey, and Blind Lemon Jefferson. From his family, young Jim Rob (as he was then called) learned to play frontier fiddle music; his father had defeated prominent country fiddler Eck Robertson in fiddle contests on more than one occasion. At age ten young Bob Wills played fiddle for his first ranch dance. From African-American neighbors and migrant workers, he learned blues and jazz, which enthralled him. In his late teens, he once rode fifty miles on horseback to see the Empress of the Blues, Bessie Smith.

Wills left the family farm at age seventeen and drifted from one job to another across Texas, working in construction and selling insurance in separate stops in Amarillo, preaching in Knox County, barbering in Roy, New Mexico, and in Turkey, Texas; laboring on several farms in various parts of the Lone Star State; and playing ranch house dances and traveling medicine shows whenever possible.

In November 1929, after joining forces with guitarist Herman Arnspiger, he made his first recordings for the Brunswick label, “Gulf Coast Blues” and “Wills Breakdown;” they were never issued and are now presumed lost. In 1930, singer Milton Brown and his guitar-playing brother Derwood joined Wills and Arnspiger. In due course they became the Aladdin Lamp Company’s “Aladdin Laddies” on WBAP-Fort Worth, and tenor banjoist Sleepy Johnson joined them for dances at the local Crystal Springs pavilion. The five-piece stringband produced the first glimmerings of what would be called western swing a decade later. In late 1930, Burrus Mill executive W. Lee O’Daniel hired the band to promote the mill’s Light Crust Flour on radio, first at tiny KFJZ and soon at WBAP, where the newly renamed Light Crust Doughboys became a favorite.

After the Browns left the band in September 1932 to form their own influential outfit, Wills soon exited the Doughboys as well. Taking with him Tommy Duncan (who had replaced Milton Brown as a Doughboy), Wills formed his own Playboys band and tried Waco for three months before heading to Oklahoma City in early 1934. After a short stint there, Wills and his five musicians arrived in Tulsa on February 9, upon being offered a daily program at KVOO on a trial basis. A daily 12:30 p.m. spot, sponsored first by Crazy Water Crystals and soon after by General Mills, launched Wills as the most popular act in the Southwest. During those years he added brass, reeds, and drums, and developed a band that by 1940 numbered sixteen members, among them such outstanding players as steel guitarist Leon McAuliffe, guitarist Eldon Shamblin, and fiddler Jesse Ashlock. The versatile band could play anything from a fiddle breakdown to a George Gershwin composition.

Bob Wills & His Texas Playboys enjoyed their greatest success from 1935 to 1947 while recording for ARC/Vocalion/OKeh/Columbia. These recordings sold in the hundreds of thousands, and his “San Antonio Rose” probably sold in the millions. On the strength of his popularity on radio and recordings, Wills began making musical westerns in Hollywood in 1940.

A December 1942 induction into the Army broke up the Texas Playboys, but upon Wills’s discharge in 1943 he relocated to southern California and reformed the band. There he was more financially successful than at any other time in his career. Huge crowds at his dances and strong-selling recordings made him one of the highest-paid bandleaders in America.

After the war Wills decided to give up most of the brass and reeds in his band and rely more fiddles, guitars, steel guitars, and mandolins. This emphasis on strings helped him maintain a fairly strong following into the late 1940s, even after the age of the big bands was largely over. Unfortunately for Wills, however, his accomplished vocalist Tommy Duncan left the Texas Playboys in 1948 to form his own band. After leaving Columbia Records in 1947, Wills worked with a series of labels: MGM (1947-54), Decca (1955-57), Liberty (1960-63), Longhorn (1964), and Kapp (1965-69).

The late 1950s saw a resurging interest in western swing, with Wills returning to Tulsa. The band quickly expanded with the additions of a saxophone section and a new vocalist, Leon Rausch. When the band’s bookings concentrated in Las Vegas, Wills and the band moved there in late 1959. Tommy Duncan returned briefly (1960–62). By 1967 Wills had disbanded the Texas Playboys. Although he still toured and performed, he did so with house bands and one lone employee, vocalist Gene “Tag” Lambert, who doubled as his driver.

In October 1968 Wills was elected to the Country Music Hall of Fame, but the following May he suffered a stroke that marked the end of his performing days. In December 1973 he recorded his final album, For the Last Time (United Artists). Other strokes followed, but he held on until May 13, 1975, when pneumonia took his life. — Charles R. Townsend