Dubbed “The Storyteller” by Country Music Hall of Fame member Tex Ritter, Tom T. Hall wrote songs distinguished by their narrative quality, their rich detail, and their keen insight into the beauty of everyday life. 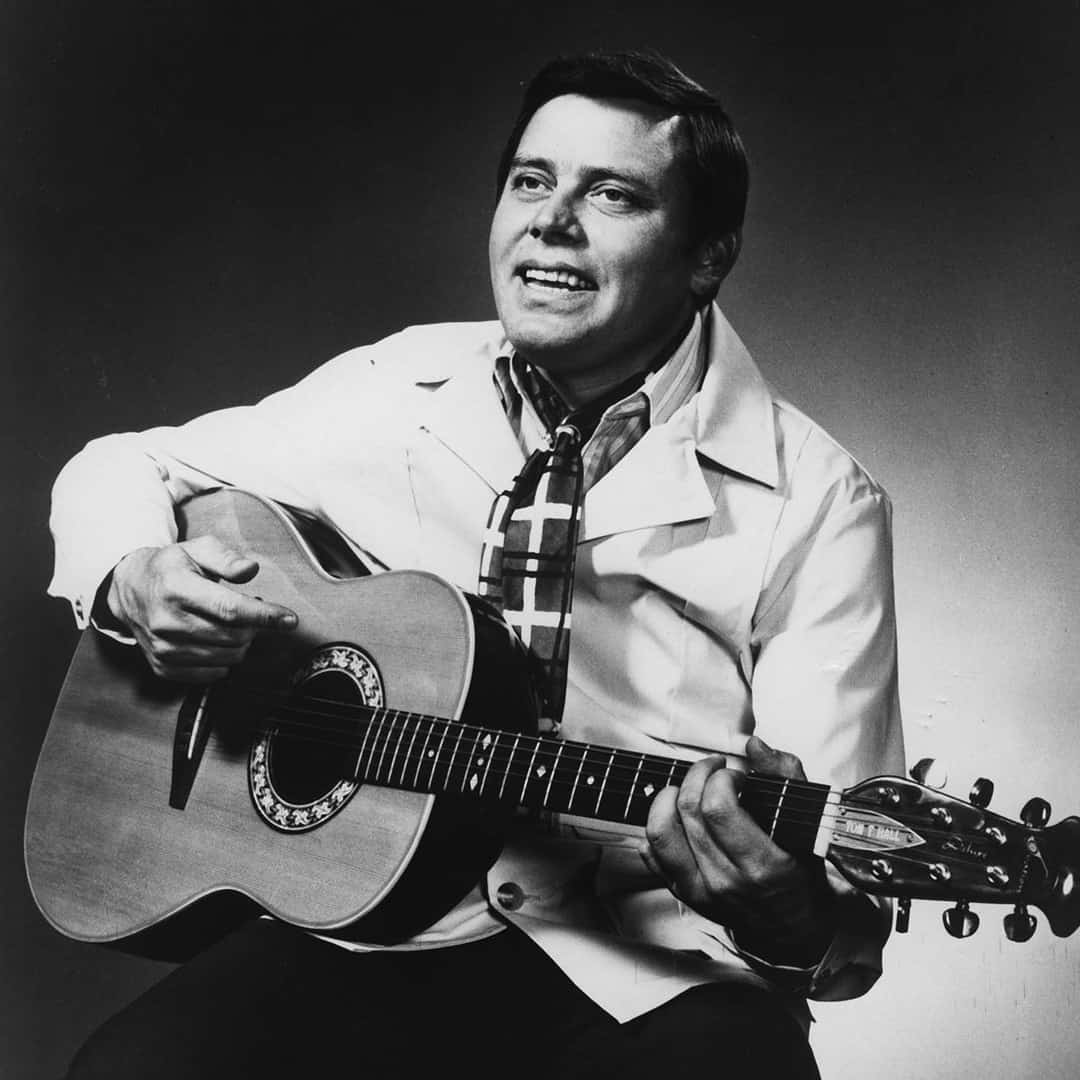 Along with songwriters such as Kris Kristofferson, Billy Joe Shaver, and James Talley, Hall brought to country music a new level of lyric and thematic sophistication and social consciousness.

Born May 25, 1936, in Olive Hill, Kentucky, Thomas Hall showed interest in music at an early age. He wrote his first song, “Haven’t I Been Good to You,” at nine, and he benefited greatly from the tutelage of local musician Lonnie Easterly (later memorized in a Hall song called “The Year That Clayton Delaney Died”). While still a teenager, Hall played bluegrass in his first band, the Kentucky Travelers, at local schools and on radio in Morehead, Kentucky. He wrote jingles for a radio sponsor and became a radio DJ before joining the Army in 1957. Stationed in Germany, he performed on the Armed Forces Radio Network, often singing original songs.

After military service, while working as a DJ in Virginia, Hall impressed Nashville publisher Jimmy Key with his songs, and Key placed Hall’s “D. J. for a Day” with Grand Ole Opry star Jimmy C. Newman, who had a Top Ten country hit with it in 1963–64. This prompted Hall’s move to Nashville in 1964 to pursue songwriting as a career. His early work was recorded by Newman, Dave Dudley (“Mad,” a Top Ten country hit in 1964), and Johnnie Wright (“Hello Vietnam,” Hall’s first country #1, in 1965).

Penning Songs for Others, and for Himself

As his singing career got underway, Hall continued to provide hit songs for other artists, chief among them “Harper Valley P.T.A.,” for Jeannie C. Riley. Challenging small-town hypocrisy, the song went to #1 in 1968 on both the country and pop charts, earned Riley a Country Music Association Award for Single of the Year, and inspired a movie and television series, significantly boosting Hall’s profile in the process. Hall’s compositions continued to do well for others, including Dave Dudley (“The Pool Shark,” #1 country in 1970) and Bobby Bare (“(Margie’s at) the Lincoln Park Inn,” #4 country in 1969 and “How I Got to Memphis,” #3 country in 1970).

In his songwriting, Hall explored common-man themes with directness and candor. Country radio—and appreciative listeners—embraced his recordings of self-penned numbers such as “Me and Jesus,” “Ravishing Ruby,” “I Like Beer,” and “Your Man Loves You, Honey.” Hall delighted parents and kids alike with the 1974 collection Songs of Fox Hollow (for Children of All Ages), which included the lighthearted “Sneaky Snake.” These songs and more earned Hall election to the Nashville Songwriters Hall of Fame in 1978.

An accomplished prose writer, Hall won the 1972 Grammy for Best Album Notes, for his liner notes to Tom T. Hall’s Greatest Hits. The autobiographical The Storyteller’s Nashville appeared in 1979. His novels included The Laughing Man of Woodmont Cove (1982), The Acts of Life (1986), Spring Hill, Tennessee (1990), and What a Book! (1996). His love of literature inspired him to befriend fellow writers William Styron and Kurt Vonnegut. He shared songwriting tips and philosophy in How I Write Songs, Why You Can (1976).

In the early 1980s, Hall hosted the syndicated TV series Pop! Goes the Country, and in 1984 he scored his last Top Ten country hit, a cover of the Gordon Jenkins and Johnny Mercer tune “P.S. I Love You.” Following the release of the album Song in a Seashell in 1985, Hall took a ten-year sabbatical from recording. He returned in 1996 with the album Songs from Sopchoppy, which included the Hall original “Little Bitty.” Alan Jackson spotted the song, recorded it, and scored a #1 country single with it in late 1996.

Hall met his wife and collaborator, Miss Dixie (Iris Lawrence, 1934-2015), at a BMI awards banquet. She accompanied Mother Maybelle Carter to the dinner and was on hand to accept an award for co-writing Dave Dudley’s 1965 hit “Truck Drivin’ Son-of-a-Gun.” The Halls’ marriage would become a creative partnership as well. The couple dedicated themselves to bluegrass music, as supporters of fledgling musicians and veterans alike, and as creators themselves. With music publishing companies and a state-of-the-art studio on their Fox Hollow farm outside Nashville, they were strategically positioned to advance the careers of bluegrass artists. In 2004, the International Bluegrass Music Association presented the couple with a Distinguished Achievement Award; in 2018, they were inducted into the IBMA Hall of Fame. Hall recorded a CD’s worth of their songs for an album, Tom T. Hall Sings Miss Dixie and Tom T. In 2005, Hall gave a series of performances at the Country Music Hall of Fame and Museum as the museum’s artist-in-residence.