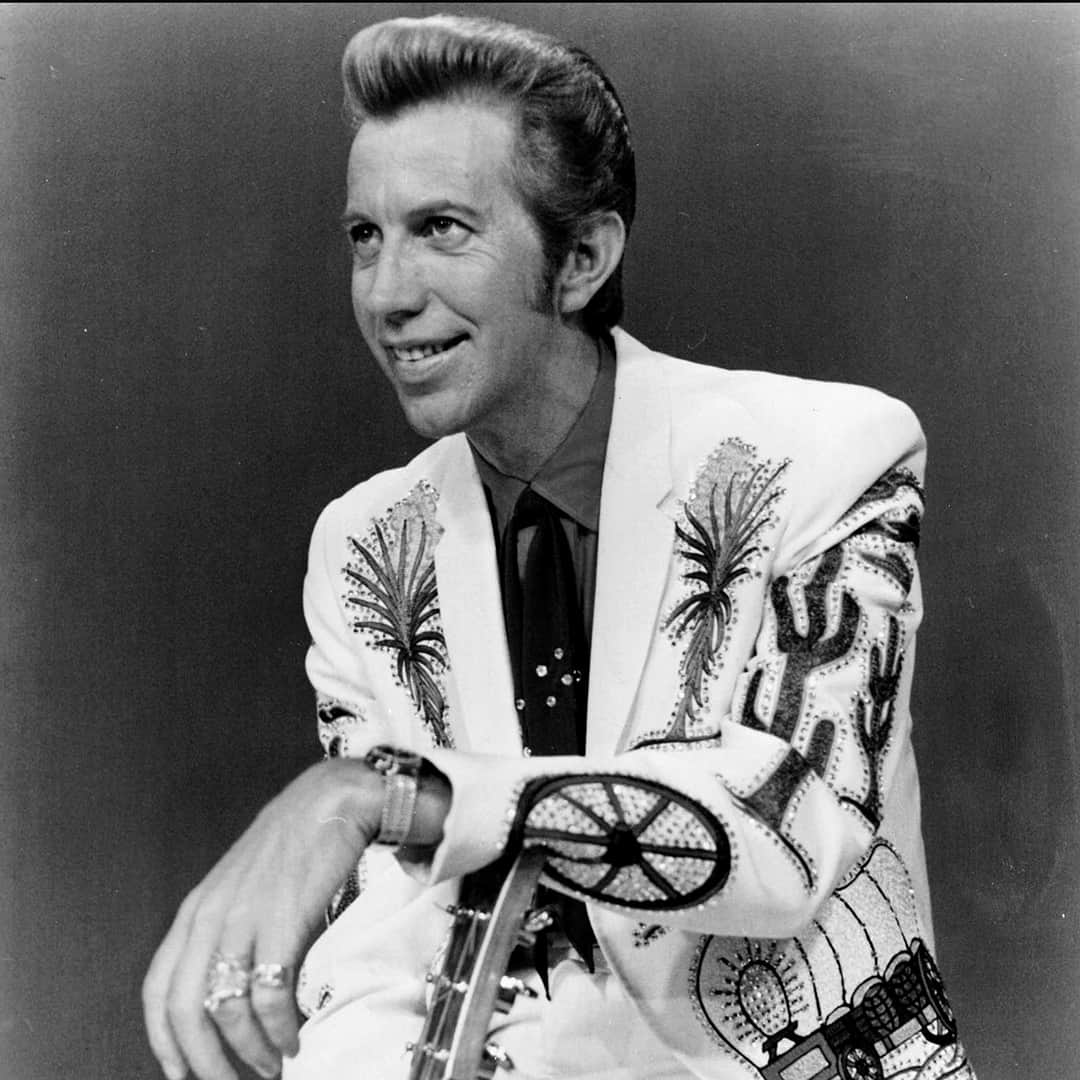 His eighty-one chart records included several country standards, and his television career, which began in 1955, culminated in his co-hosting The Nashville Network’s Opry Backstage for nearly a decade, starting in 1992. In the wake of Roy Acuff’s death in November 1992, he became the unofficial spokesman for the Grand Ole Opry.

Wagoner was born in an Ozark Mountain region of Missouri steeped in ancient English balladry. A farm boy, he moved with his family to West Plains, where he married in 1946. He formed the Blue Ridge Boys band and by 1950 was singing over local radio (KWPM) out of a butcher shop where he cut meat.

Wagoner’s big break came when Springfield, Missouri, radio station KWTO hired him in 1951. He signed with RCA Records in 1952, but because his early records didn’t sell well, Wagoner committed himself to a hard-traveling career of playing schoolhouses for gate proceeds only. His act was billed as the Porter Wagoner Trio, with Don Warden on steel guitar and Herschel “Speedy” Haworth on rhythm guitar.

In 1960 Wagoner was invited by the Chattanooga Medicine Company to front a syndicated television show. Immediately he broadened his act, adding comedian Speck Rhodes, singer Norma Jean, and eventually Buck Trent (banjo), Mack Magaha (fiddle), and George McCormick (guitar). The show featured celebrities such as Tex Ritter and Cowboy Copas, plus newcomers such as Willie Nelson and Waylon Jennings. The Porter Wagoner Show ran for an impressive two decades, ending in 1981.

In 1967 Dolly Parton replaced Norma Jean in the show’s cast and began recording duets with Wagoner, including fourteen Top Ten hits and one #1, “Please Don’t Stop Loving Me” (1974). Wagoner was their de facto producer-arranger on thirteen duet albums, and he also supervised Parton’s RCA solo output during this same period. While she eventually outshone Wagoner on the charts, he nevertheless prospered from his tireless efforts in building her career. Although Parton’s departure from the show in mid-decade led to angry words and legal action, the two eventually resolved their differences.

Wagoner’s post-Parton career upheld his innovative, persistently upbeat persona. He brought soul great James Brown to the Grand Ole Opry, produced R&B sessions for Joe Simon, appeared in the Clint Eastwood film Honkytonk Man (1982), and served as an Opryland tourist ambassador in the 1990s. A mainstay of the Opry until his death, he was honored in May 2007 for his fifty years as an Opry member. Wagoner recorded a final album, Wagonmaster; released in June 2007 and produced by Marty Stuart, it drew rave reviews and feature articles in the New York Times and No Depression. In July, he opened for the White Stripes at Madison Square Garden. He died in October 2007. – Steve Eng

–  Adapted from the Country Music Hall of Fame® and Museum’s Encyclopedia of Country Music, published by Oxford University Press.