Merle Haggard stands, with the arguable exception of Hank Williams, as the single most influential singer-songwriter in country music history. 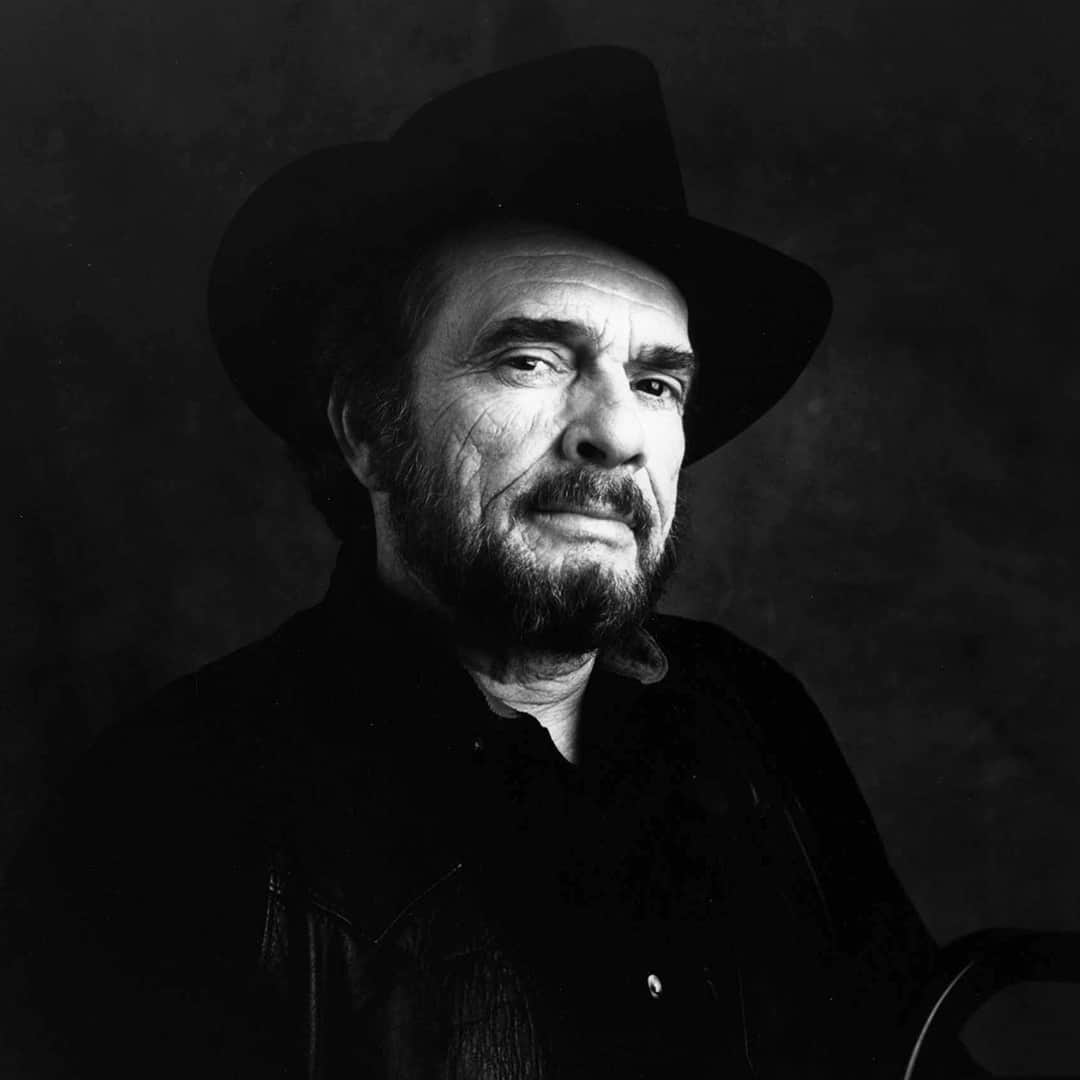 His acolytes are legion and include many of country music’s brightest and lesser lights, as well as thousands of nightclub musicians. As fiddler Jimmy Belken, a longtime member of the Strangers, Haggard’s exemplary touring band, once told The New Yorker, “If someone out there workin’ music doesn’t bow deep to Merle, don’t trust him about much anything else.”

Haggard was born poor, though not desperately so, in Depression-era Bakersfield to Jim and Flossie Haggard, migrants from Oklahoma. Jim, a railroad carpenter, died of a stroke in 1946, forcing Flossie to find work as a bookkeeper.

Flossie was a fundamentalist Christian and a stern, somewhat overprotective mother. Not surprisingly, Merle grew quickly from rambunctious to rake-hell. By his twenty-first birthday he had run away regularly from home, been placed in two separate reform schools (from which he in turn escaped a half-dozen times), worked as a laborer, played guitar and sung informally, begun a family, and performed sporadically at southern California clubs and, for three weeks, on the Smilin’ Jack Tyree Radio Show in Springfield, Missouri. He also spent time in local jails for theft and bad checks.

His woebegone criminal career culminated in 1957 when, drunk and confused, he was caught burglarizing a Bakersfield roadhouse. After an attempted escape from county jail, he was sent to San Quentin. There, in a final burst of antisocial activity, he got drunk on prison home brew, landing himself briefly in solitary confinement. He was paroled in 1960 and, after a fitful series of odd jobs, got a regular gig playing bass for Wynn Stewart in Las Vegas.

He released his first album, Strangers, in 1965. Roughly seventy feature albums have followed. Counting repackagings, reissues, compilations, promotional and movie-soundtrack albums, as well as albums in which Haggard has participated—with the likes of Willie Nelson, Porter Wagoner, Johnny Paycheck, Bob Wills, Dean Martin, Ray Charles, and Clint Eastwood—the number of albums is likely more in the vicinity of 150.

In addition, Haggard was an accomplished instrumentalist, playing a commendable fiddle and a to-be-reckoned-with lead guitar. He and the Strangers played for Richard Nixon at the White House in 1973, at a barbecue on the Reagan ranch in 1982, at Washington’s Kennedy Center, and 60,000 miles from earth—courtesy of astronaut Charles Duke, who brought a tape aboard Apollo 16 in 1972. Haggard won numerous CMA and ACM Awards including both organizations’ 1970 Entertainer of the Year awards, been nominated for scores of others, was elected to the Songwriters’ Hall of Fame in 1977, and won Country Music Hall of Fame membership in 1994. In 1984 he won a Grammy in the Best Country Vocal Performance, Male category for “That’s the Way Love Goes.”

Even so, he remained famously independent (he once walked out on an imminent appearance on The Ed Sullivan Show), and he kept himself at arm’s length from musical Nashville’s sociopolitical vortex.

There was no such thing as a typical Merle Haggard concert. He prided himself on riding the winds of whim and cussedness and, on any given night, might divert from chart and fan favorites and give himself over to a long set of songs by Jimmie Rodgers, Lefty Frizzell, or Bob Wills. The three men constituted Haggard’s most lasting musical influences. Additionally, he took great pride in the Strangers’ musicianship, and their importance transcended that of mere sidemen. The band ranged in number from three to ten over the years, incorporated such atypical country instruments as trombones, trumpets, and saxophones, and included long-respected players such as Roy Nichols, Norm Hamlet, Biff Adam, and Clint Strong. The Strangers themselves garnered eight ACM Touring Band of the Year awards.

Ironically, Haggard was inextricably linked with a casual ditty that shifted attention from his soaring musicianship to his politics. “Okie from Muskogee” (Capitol, 1969), a #1 song for four weeks and the 1970 Single of the Year for both the ACM and CMA, was a seemingly belligerent and defensive screen of traditional American heartland values that appeared at the height of the fractious decade of the Vietnam War. Haggard’s retellings of the song’s intent was manifold and contradictory. In 1974 he told a Michigan newspaper reporter, “Son, the only place I don’t smoke is Muskogee.” A dozen years later, however, he told the Birmingham Post-Herald that “Okie” was “a patriotic song that went to the top of the charts at a time when patriotism wasn’t really that popular.” Although he frequently bemoaned the public’s perception of him as a political animal, he followed “Okie” with the truly angry “The Fightin’ Side of Me” (Capitol, 1970) and, in 1988, a sentimental reaction to flag burning, “Me and Crippled Soldiers.”

Haggard’s personal life was not without drama. His business acumen was notoriously erratic, and he was married five times. He had six children, four by his first wife, Leona Hobbs, and two by his fifth wife, Theresa Lane. From 1965 to 1978 Haggard was married to singer Bonnie Owens, with whom he recorded a duet album, Just Between the Two of Us (Capitol, 1966), and who was a regular member of Haggard’s musical company. He was also married for a time to singer Leona Williams, who wrote his #1 hits “You Take Me for Granted” and “Someday When Things are Good” (co-written with Haggard).

In 2000 Haggard aligned himself with Los Angeles-based punk label Epitaph Records to release If I Could Only Fly on its Anti imprint. Just as Johnny Cash had done by moving to rock- and rap-oriented American Records, Haggard inspired a flurry of media attention with his choice for a label home. On his second release for Anti, Roots Volume 1 (2001), Haggard worked with guitarist Norm Stephens, who played on Frizzell’s early recordings.

Haggard kept recording well past retirement age, issuing a tribute to early country recordings with The Peer Sessions (2002) and to acoustic mountain music with The Bluegrass Sessions (2007). He won a Grammy for Last of the Breed, in collaboration with Willie Nelson and Ray Price, and in 2015 released Django & Jimmie, a duet album with Willie Nelson. Although in and out of the hospital in his last years with heart and respiratory issues, Haggard kept touring until his death from pneumonia on his 79th birthday, April 6, 2016. – Bryan Di Salvatore

Haggard’s friend, the iconic songwriter Kris Kristofferson, called him “the greatest artist in American music history” and “the most successfully rehabilitated prisoner in American history.”

“From San Quentin prison to the Hall of Fame,” Kristofferson said. “Nobody’s come so far.”

Haggard’s life story is improbable and inspiring. His songs wrapped grace and poetry in the unadorned workwear of the common man.

Museum Editor Peter Cooper spoke at length with Haggard for a 2010 American Songwriter magazine cover story. In that conversation, Haggard offered the same kind of wisdom, humor, and perspective that he brought to his songs.

“I’ve always known that I was a gifted person,” he said in the interview. “I’ve always felt like I would be punished, severely, if I didn’t continue to make use of that gift.”