Kitty Wells was a thirty-three-year-old wife and mother when her 1952 recording of “It Wasn’t God Who Made Honky Tonk Angels” suddenly made her a star. 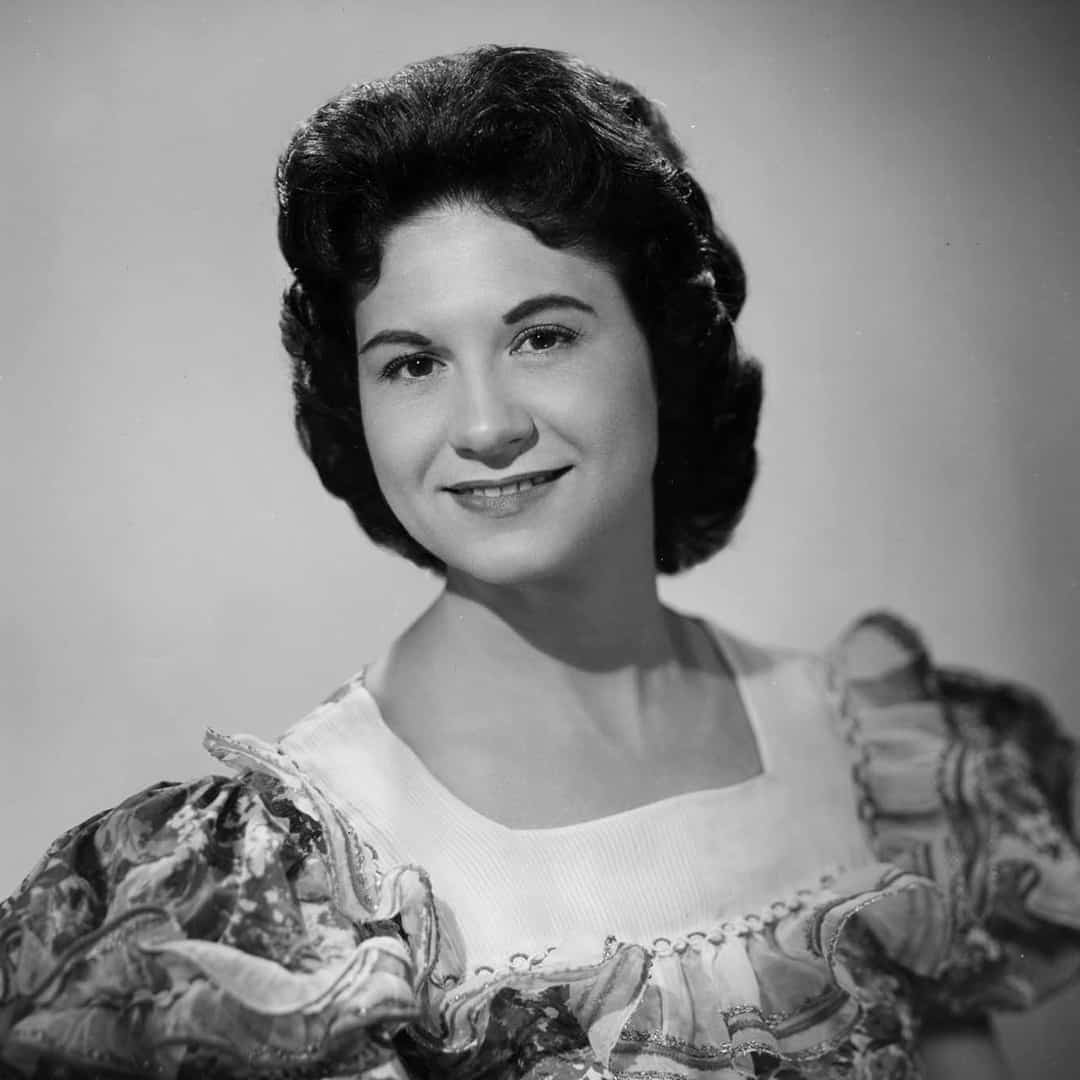 Other female country singers of her day were trying their hands at hard-living, honky-tonk sounds, but it was the intense and piercing style of Kitty Wells, with her gospel-touched vocals and tearful restraint, that resonated with country audiences of the time and broke industry barriers for women.

Born Ellen Muriel Deason in Nashville, her country roots ran deep. Her father and uncle were country musicians, her mother a gospel singer. In 1934, with the Great Depression at its height, Wells dropped out of school to work at the Washington Manufacturing Company, where she was paid nine dollars a week to iron shirts. With her two sisters and a cousin, Wells also performed on radio, the four of them broadcasting as the Deason Sisters.

On October 30, 1937, at age eighteen, Wells married Johnnie Wright. The two of them and Wright’s sister Louise performed as Johnnie Wright and the Harmony Girls. In 1939 Wright and Jack Anglin formed the duo Johnnie & Jack.

Wells performed as the “girl singer” with Johnnie & Jack on radio shows as they traveled throughout the South in the early 1940s. It was during this time that Wright began to refer to his wife as “Kitty Wells,” a name taken from a nineteenth-century tune recorded in 1930 by the Pickard Family.

During World War II Anglin served in the army and Wright worked at a DuPont chemical factory north of Nashville. But after the war, Johnnie and Jack reunited, and Wells traveled with them to join the new Louisiana Hayride on KWKH in Shreveport. As “Rag Doll,” she spun records and sold quilting supplies.

Wells’s recordings for RCA in 1949 and 1950 found no success, but Johnnie & Jack’s “Poison Love” took them to the Grand Ole Opry in 1952. At this time, Wells was persuaded to record an answer song to “The Wild Side of Life,” a Hank Thompson hit that featured the line “I didn’t know God made honky-tonk angels.”

Thinking primarily of the $125 recording payment, Wells went into Nashville’s Castle Studio on May 3, 1952, to record “It Wasn’t God Who Made Honky Tonk Angels” for Decca Records. The single took off during the summer and sold more than 800,000 copies in its initial release. It also crossed over to Billboard‘s pop charts, hitting #27.

The song’s sentiments are similar to 1894’s “She Is More to Be Pitied than Censured,” with its premise that deceitful men are responsible for fallen women. The record was controversial and received some resistance from radio executives, but audiences couldn’t get enough of it.

Subsequent records followed this pattern of deep emotion and restrained hurt expressed from a woman’s point of view. Her other classic honky-tonk ballads include “Release Me” (1954), “Making Believe” (1955), and “I Can’t Stop Loving You” (1958). Contemporary themes and modern ways were highlights of songs like “Your Wild Life’s Gonna Get You Down,” “I Heard the Jukebox Playing,” “Will Your Lawyer Talk to God?,” “Broken Marriage Vows,” “Cheatin’s a Sin,” “Mommy for a Day,” and “A Woman Half My Age.” On Wells’s records, sorrowful men and women acted out their emotional dramas through her plaintive vocals accompanied by crying steel guitar.

On stage, Wells was unpretentious, proper, and even old-fashioned in her gingham dresses with full skirts, rickrack, and puffed sleeves. In her private life she was family-oriented and without controversy, crisis, or scandal. But in her songs Wells could be the rejected woman, the barroom sinner, worldly wise, a victim of her own passion, even morally weak.

As the top female country star of her generation she accumulated thirty-five Billboard Top Ten records and eighty-one charted singles. She starred in her own syndicated TV show in 1968, and her last major hit was in 1971. Her three children with Wright—daughters Ruby and Carol Sue, and son Bobby—all became part of The Kitty Wells-Johnny Wright Family Show, which continued to tour throughout 2000, when Wells and Wright announced their retirement and gave their final performance, on New Year’s Eve. Wright passed away on September 27, 2011.

Wells was elected to the Country Music Hall of Fame in 1976 and was nominated for a 1989 Grammy Award for her “Honky-Tonk Angels Medley” with k. d. lang, Loretta Lynn, and Brenda Lee. In 1991, Wells received a Grammy Lifetime Achievement Award, along with Bob Dylan, Marian Anderson, and John Lennon. She was the first female country singer to receive the award, and only the third country performer overall, following Roy Acuff and Hank Williams.

Ultimately, Wells’s great achievement was disproving the accepted country music wisdom of her time, which warned that women don’t sell records and can’t headline shows. Her success led record companies to open their doors to other female artists and to experiment with new themes and images for women, thereby changing country music forever. –Mary A. Bufwack