Best known to the general public for his exuberant banjo playing, for his singing of novelty songs like “Rattler” and “Mountain Dew,” and for his infectious verbal comedy on shows like Hee Haw, Grandpa Jones was also one of country music’s most dedicated champions of old-time music. 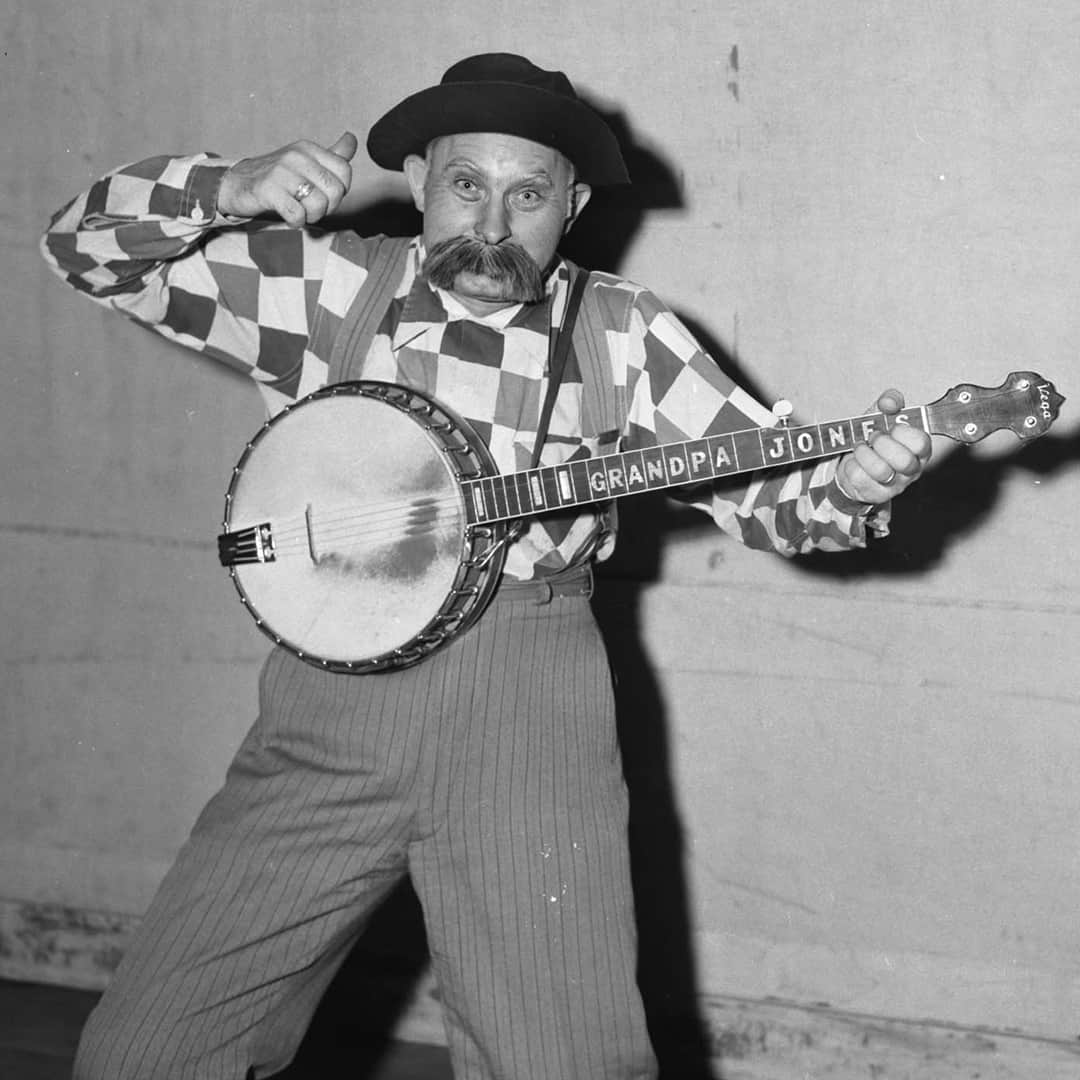 Not only did he keep banjo playing alive during times when it had fallen into disfavor with most professional musicians, but he also helped to keep alive the songs of pioneers like Jimmie Rodgers, Bradley Kincaid, Lulu Belle & Scotty, and the Delmore Brothers.

A serious fan of southern gospel music, Jones also helped maintain the old gospel quartet tradition in groups like the Brown’s Ferry Four and the Hee Haw Gospel Quartet. Though not an acoustic purist in the strict sense—he generally used an electric guitar in his act and on his records—his devotion to “keeping it country” won him fans nationwide for seven decades, as well as a long-time tenure on the Grand Ole Opry and election to the Country Music Hall of Fame in 1978.

The youngest of eight boys and two girls born to a tobacco farmer, Louis Marshall Jones grew up in northwestern Kentucky, just a few miles from the Ohio River. By the time he was in high school, the family was living in Akron, Ohio, and young Marshall (as he was called by his folks) was copying Jimmie Rodgers songs and was appearing on local station WJW as “The Young Singer of Old Songs.” After a stint on the popular Lum and Abner radio show (as part of the show’s stringband) he and friend Joe Troyan (“Harmonica Joe”) met a man who was to have an immense impact on Jones’s career—singer Bradley Kincaid. In 1935 they were working with Kincaid over WBZ in Boston when Kincaid gave him the nickname Grandpa because he sounded old and grouchy on the early morning show. Kincaid had him outfitted with a vaudeville costume—including fake mustache—and at age twenty-two Marshall Jones became Grandpa Jones.

By 1937 Jones struck out on his own, playing stations in West Virginia and Cincinnati; along the way he met boisterous entertainer Cousin Emmy, who taught him how to play clawhammer banjo—which he soon incorporated into his act. At WLW he joined forces with the Delmore Brothers and Merle Travis to form the Brown’s Ferry Four, one of country’s first and most popular gospel quartets. In the fall of 1943 he and Travis were asked to make their first records, for a new, locally based label to be called King; their disc, released under the pseudonym the Shepherd Brothers, was the first King release. Throughout the rest of the 1940s, recorded regularly for King, racking up hits like “It’s Raining Here This Morning,” “Eight More Miles to Louisville,” and “Mountain Dew.”

In October 1946 Jones married Ramona Riggins, a talented fiddler and singer he had met at WLW, and the two moved to Nashville, where Grandpa joined the Grand Ole Opry. Throughout the 1950s, the pair entertained troops in Korea; made brief stays at Arlington and Richmond, Virginia, and Washington, D.C.; and recorded for RCA and Decca. By 1959 they had settled permanently on the Opry, and a few years later started a family that would include Mark, Alisa, and Marsha (a fourth child, Eloise, came from Jones’s earlier marriage in West Virginia.) In the early 1960s Jones began recording for Fred Foster’s new label, Monument, producing a series of albums that Jones considered the best work he did. They also produced two of his biggest hits, a version of Jimmie Rodgers’s “Blue Yodel (T for Texas)” (1963) and the seasonal narration “The Christmas Guest” (1969).

In 1969 Jones joined the cast of Hee Haw, where he perfected his comedy with routines such as “What’s for Supper,” and where he worked with greats such as Minnie Pearl and his close friend David “Stringbean” Akeman. In 1976, Jones and his wife started a series of albums for CMH, which included remakes of many of his early hits and which gave their talented children a chance to perform with their parents. In 1984 he wrote (with Charles Wolfe) a detailed autobiography, Everybody’s Grandpa, and was still going strong when the Opry management helped him celebrate his fiftieth anniversary on the show in 1997. Jones had a severe stroke moments after his second show Opry performance on January 3, 1998, and he died February 19. – Charles Wolfe