Since appearing on the country scene in 1981, George Strait’s name has become synonymous with “real country.” 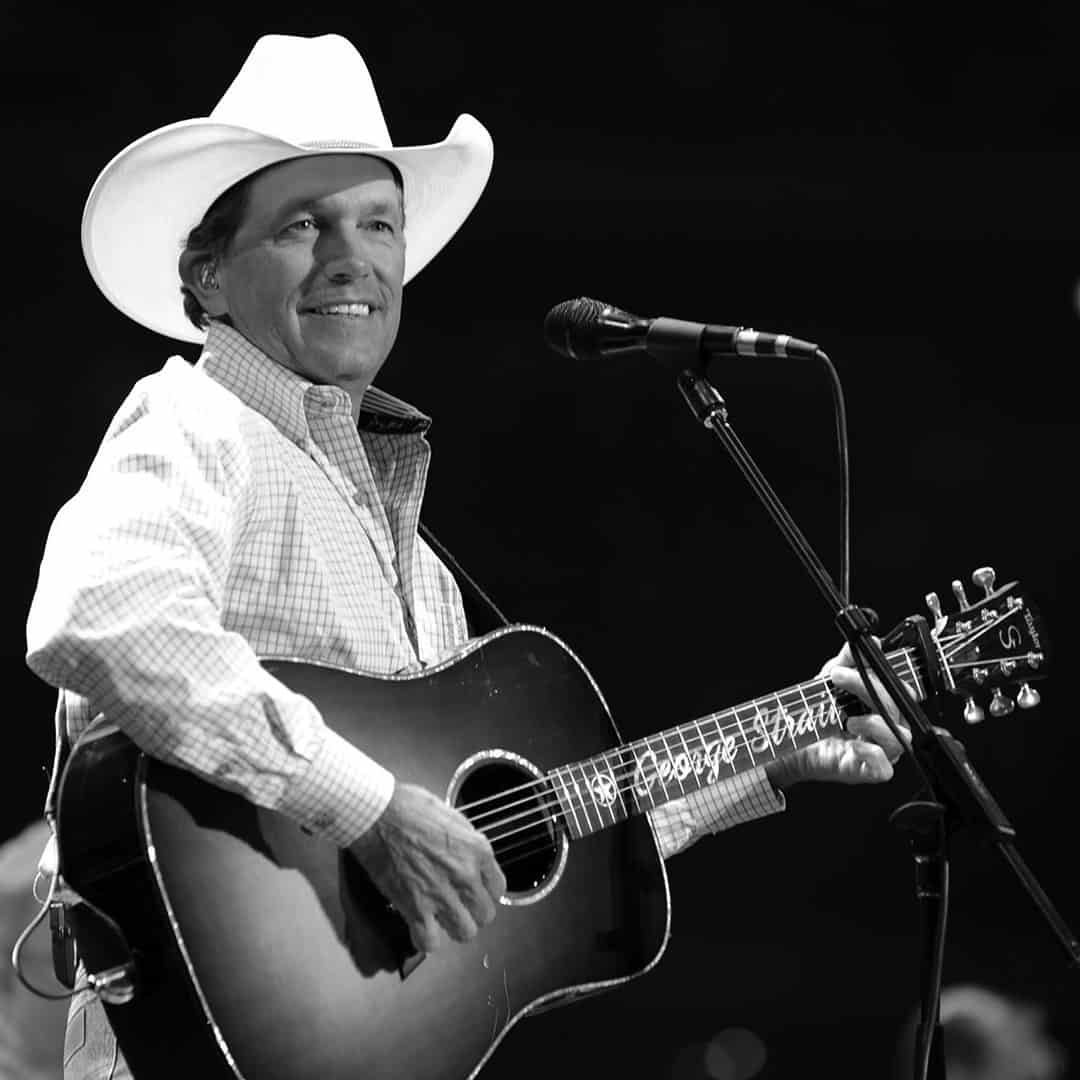 His unadorned Texas rancher’s clothes—cowboy hat, western shirt, and blue jeans—have been copied by a legion of young “hat acts.” Strait’s albums have been certified either gold, platinum, or multi-platinum, and he remains a huge concert draw. Much of modern country music includes pop sounds, but Strait consistently draws from both the western swing and the honky-tonk traditions of his native Texas.

She’ll Leave You with a Smile – George Strait

Strait grew up in Pearsall, Texas. His parents divorced when he was still in grade school, and Strait and his older brother Buddy were raised by their father, John Strait, a junior high school math teacher. The boys learned ranch ways early on, helping out on the family’s 2,000-acre spread.

Strait didn’t listen much to country music growing up; rather, he was inspired by the mid-1960s British Invasion rock groups and joined a number of garage bands in high school. He eloped after graduation with longtime sweetheart Norma, then signed up for a stint in the Army.

While stationed in Hawaii, Strait found his true calling: country music. In 1973 he auditioned and won the slot as singer in a country band on base. He absorbed the music of Hank Williams, George Jones, and Merle Haggard. Haggard’s tribute album to the legendary Bob Wills, Tribute to the Best Damn Fiddle Player in the World (or, My Salute to Bob Wills), was instrumental in turning Strait in the direction of western swing.

Back home, Strait enrolled at Southwest Texas State University (now known as Texas State University-San Marcos) to pursue a degree in agriculture, but by then he was also seriously considering a music career. He hooked up with the Ace in the Hole band, began extensive regional performing, and recorded several singles on the D Records label. Despite club success, however, several trips to Nashville failed to drum up interest in Strait as a major label prospect.

During one fortuitous club appearance, club owner and former record promotion man Erv Woolsey liked what he heard. In 1981, Woolsey helped Strait sign with MCA. Woolsey would remain Strait’s behind-the-scenes advocate before eventually taking on the role of full-time manager.

Strait arrived in Nashville just as the Urban Cowboy movement was in full swing. His first honky-tonk missive, 1981’s “Unwound,” went to #6 on the Billboard charts. The accompanying album, Strait Country, helped to increase hardcore country airplay on many radio stations.

As a vocalist, Strait proved a masterful interpreter. While his Texas accent came through, he avoided over-the-top twang and flashy fillips in favor of subtle phrasing. Through his love of Haggard, he developed both the evocative nuance of Lefty Frizzell and the smooth, crooning shadings of Bing Crosby and Perry Como.

Strait began his long reign at the top of the charts, and subsequent Top Ten hits displayed his range. Although his roots were in Texas dance-hall music, he also proved he had a way with the pop-influenced tune, typified by “If You’re Thinking You Want a Stranger (There’s One Coming Home)” (#3, 1982), and the smooth ballad, as shown in his performance of “Marina Del Rey” (#6, 1983). His #1 hits included his cover of the Bob Wills staple “Right or Wrong” (1984), the sly “All My Ex’s Live in Texas” (1987), and the western swing of “Am I Blue” (1987). Albums such as 1984’s Does Fort Worth Ever Cross Your Mind emphasized Strait’s ongoing debt to western swing and honky-tonk.

Personal tragedy struck in 1986 when Strait’s thirteen-year-old daughter, Jenifer, was killed in a car accident. (Strait’s son, George Jr., was born in 1981.) When Strait won that year’s CMA Male Vocalist of the Year Award (for the second year in a row), he accepted it in Jenifer’s memory.

By 1990, the year Strait won his second consecutive CMA Entertainer of the Year Award, country’s ranks had swelled with many young stars who dressed like Strait, but few were able to mimic his keen blend of traditional and contemporary sounds. As evidence of his staying power, his blockbuster hit “Love Without End, Amen” topped the charts for five weeks.

Strait hit the big screen in 1992 with Pure Country, a film in which he played a disillusioned country star named Dusty Chandler. The soundtrack of the same name became Strait’s biggest seller to date, yielding the #1 hits “I Cross My Heart” and the album opener “Heartland.”

Although Strait seldom wrote songs until well into his hitmaking career, he has relied on the cream of the tunesmith crop throughout the years, including stalwart Whitey Shafer and younger craftsman Dean Dillon. In recent years, Strait has leaned on the talents of singer-songwriters Jim Lauderdale and Aaron Barker.

Strait’s career continued undiminished in the late 1990s and beyond. In 1995, he celebrated his fifteenth year as a recording artist by releasing the boxed-set career retrospective Strait Out of the Box, which flew out of stores in unprecedented numbers. In 1996 the CMA presented him with the Single of the Year Award for “Check Yes or No,” and that year he also won Album of the Year (Blue Clear Sky) and Male Vocalist of the Year Awards. Strait took away another CMA Male Vocalist of the Year Award in 1997 as well as Album of the Year Award for Carrying Your Love with Me. In 1998 he kicked off the George Strait Country Music Festival, a multi-artist nationwide tour sponsored by Nokia and Chevy Trucks and released yet another best-selling album, One Step at a Time. He released Always Never the Same the following year, and followed in 2000 with George Strait, which showcased his hit single “Go On.”

Strait has continued his winning streak into the twenty-first century with albums including the technologically experimental The Road Less Traveled (2001); For the Last Time: Live from the Astrodome (2003) capturing his headlining performance at the final Houston Livestock Show and Rodeo; the hard-edged Honkytonkville (2003); and Somewhere Down in Texas (2005). In 2008 he won CMA’s Single of the Year Award for “I Saw God Today” and the organization’s Album of the Year honors for Troubadour. In 2013 he was again named CMA Entertainer of the Year. Strait’s musical consistency and unadorned performing style continue to make him one of American music’s most popular artists. Though he reduced his touring schedule in 2018, in December of that year he announced upcoming appearances for the following year.–Chrissie Dickinson