With their strong feminine stances in the 1960s and 1970s, Dolly Rebecca Parton, along with fellow pioneers Loretta Lynn and Tammy Wynette, revolutionized the world of country music for women performers. 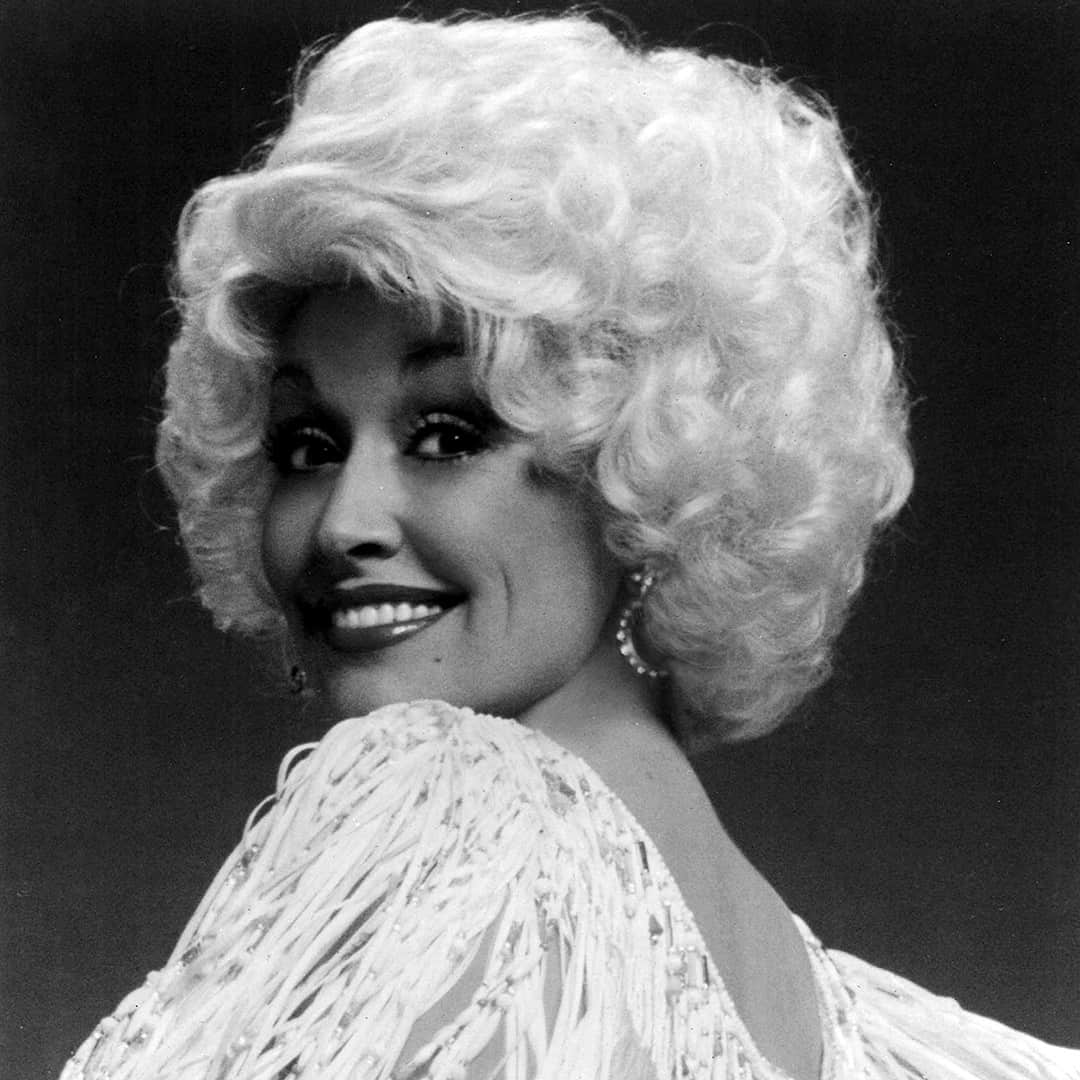 Then Parton took her crusade a step farther by crossing over to the pop world—landing on the cover of Rolling Stone, achieving pop hits, and starring in a series of Hollywood movies.

I Will Always Love You – Dolly Parton

Coat of Many Colors – Dolly Parton

Along the way, however, she ultimately lost much of her core country audience, to the point that in 1997 she dissolved her fan club, which had been one of the staunchest in country music. But Parton’s career—and her appeal to fans of hard country—was far from over. Beginning in 1999 she returned to the music of her youth and began rebuilding a tradition-minded fan base with a series of critically acclaimed bluegrass albums.

Parton was born into a large family, the fourth of twelve children, on January 19, 1946 in Locust Ridge, Tennessee. She came from deep in Appalachia, where music was an integral part of life for those who, like the Partons, struggled to make a hard living. Her mother was a singer who taught Dolly church music along with the Elizabethan ballads her ancestors had brought to America. Dolly’s grandfather was a fiddling preacher who wrote “Singing His Praise,” which was recorded by Kitty Wells. Several of Dolly’s eleven siblings have been active in music, and some worked for a time in her family band.

Parton’s childhood figured very strongly in her ambition to escape her circumstances, and in the many frank, unromantic songs she wrote about her experience and about life in Appalachia. For example, “Coat of Many Colors” (#4, 1971) was a straight-ahead account of a humiliating experience she had suffered at school when classmates made fun of her patchwork, homemade coat.

Parton was encouraged in her tentative attempts at music by her uncle Bill Owens, who bought her a guitar and who, by the time she was ten years old, managed to land her a stint on a television variety show in the nearest big town, Knoxville. Nashville soon took note of her, and she made her first guest appearance on the Grand Ole Opry at age thirteen in 1959. She also recorded a single for a small Louisiana label, and one for Mercury Records in Nashville in 1962.

Parton was not daunted by the lack of success of her early recordings, so in 1964 she packed her bags and left for Nashville immediately after graduating from high school. Her first day in town, she met her future husband, contractor Carl Dean, in a laundromat. Her musical career progressed apace; people began to take note of her as a songwriter, especially after a pair of songs she wrote with Bill Owens became Top Ten hits for Bill Phillips in 1966. Then she recorded for Fred Foster’s Monument Records from 1965 to 1967, with “Dumb Blonde”—which attacked traditional female stereotypes—becoming her first Top Forty hit.

Parton’s pivotal career moment came in 1967, in the form of a phone call from the syndicated television series The Porter Wagoner Show. Wagoner, a flashy-dressing traditional country singer, was looking to replace his duet partner Norma Jean. As a team, Wagoner and Parton became immediate audience favorites. Her hourglass figure, outrageous outfits, and angelic voice played off perfectly against Wagoner’s cornpone humor and old-fashioned country sensibility. RCA Records signed Parton as both Wagoner’s duet partner and as a solo recording artist. She became increasingly successful in both personas, and soon began to eclipse Wagoner’s own star.

Parton’s first solo #1 hit was her composition “Joshua” (1970–1971), and that led to three more #1 songs in 1974: “Jolene,” “Love Is Like a Butterfly,” and “I Will Always Love You.” That the latter song was her own personal farewell to partner Wagoner became painfully evident to him when she left his TV show that year. Under contractual obligations, he continued to produce her records until 1976 (including the #1 hit “The Bargain Store” in 1975), but she was soon on her own.

In retrospect, the early- to mid-1970s was the most creatively fertile period of Parton’s country music career. She was voted the Country Music Association’s (CMA) Female Vocalist of the Year in both 1975 and 1976. Additionally, 1973 yielded what has come to be regarded by some as her most nearly-perfect album, My Tennessee Mountain Home. It’s a bittersweet look backward at a life and a tradition she was bound on leaving. The cover is a picture of the cabin in which she grew up in Sevierville; the songs, especially the title cut, are a matter-of-fact tribute to a people and a way of life that are vanishing. “I wanted to be free,” she told Rolling Stone in 1977. “I had my songs to sing, I had an ambition and it burned inside me. It was something I knew would take me out of the mountains. I knew I could see worlds beyond the Smoky Mountains.”

Parton’s new life looked beyond Nashville and increasingly upon Hollywood. Her first album after declaring her independence from Wagoner was 1977’s New Harvest, First Gathering, which yielded the #11 single “Light of a Clear Blue Morning.” That same year brought the album Here You Come Again, a glitzy—and successful—attempt at a country-to-pop crossover. The CMA named her Entertainer of the Year in 1978, and it seemed as if Parton could preserve the best of both worlds.

Parton’s country career became erratic after that, however, even as her name became a household word and she became a constant presence on network TV, appearing on talk shows, specials, and a brief self-titled series of her own in 1976. Her movie career bounced from stellar (9 to 5) to forgettable (Rhinestone, which attempted to make Sylvester Stallone a believable country singer). Her recording triumphs included 1987’s Trio album with Emmylou Harris and Linda Ronstadt and the 1993 Honky Tonk Angels collaboration with Loretta Lynn and Tammy Wynette. In 1992 the singer Whitney Houston recorded Parton’s “I Will Always Love You,” which became a #1 smash hit in the pop market, partly due to its inclusion in the soundtrack for the movie The Bodyguard.

Parton has also demonstrated her business acumen in several ventures, most notably the theme park Dollywood in East Tennessee, near Sevierville. In 1985 she and other investors opened the park, which has become one of the South’s leading tourist attractions. Through Dollywood and the non-profit Dollywood Foundation, Parton has contributed in many ways to her home county’s economy and to scholarship programs for high school students there. Her Imagination Library, which gives one free book a month to children from birth to age five, has distributed more than 100 million books, and expanded from East Tennessee to towns across the United States and into England and Australia. She also supports the Dolly Parton Center for Women’s Services in Sevierville. There is now a life-size statue of Parton on the lawn of the Sevier County courthouse.

In 1996 Parton cut Treasures, an album of favorites (non-Parton songs), for the new Nashville recording label Rising Tide Entertainment. The album was a critical success but did not fare well commercially. In that same year she and Vince Gill won the CMA’s Vocal Event of the Year Award for their duet recording of “I Will Always Love You.” Parton, Harris, and Ronstadt joined forces again for Trio II, and the supergroup’s rendition of Neil Young’s “After the Gold Rush” won a 1999 Grammy Award for Best Country Collaboration with Vocals. In 1999 Parton was elected to the Country Music Hall of Fame.

That year also marked Parton’s coming full circle to the music she grew up hearing. She released her first bluegrass album for Sugar Hill, The Grass Is Blue. It was named Album of the Year by the International Bluegrass Music Association (IBMA) and won a Grammy Award for Best Bluegrass Album. Two additional bluegrass albums, Little Sparrow (2001) and Halos and Horns (2002), followed. In 2003 Sugar Hill released Just Because I’m a Woman: Songs of Dolly Parton, a tribute album, which included tracks from Norah Jones, Sinead O’Connor, Alison Krauss, and Shania Twain, among others.

In 2004, the Library of Congress presented Parton with the Living Legend Award for her contributions to the United States’ cultural landscape. In 2005, she received the National Medal of Arts, the highest award given to artists by the U.S. government; a year later, she received the prestigious Kennedy Center Honors.

Parton wrote the music and lyrics for the musical adaptation of 9 to 5, which debuted on Broadway in 2009; her work was nominated for the Best Original Score Tony award. – Chet Flippo