Kix Brooks and Ronnie Dunn—performing together as Brooks & Dunn—charged onto the country music scene in 1991. Their debut album, Brand New Man, launched them toward stardom with four consecutive #1 hits—“Brand New Man,” “My Next Broken Heart,” “Neon Moon,” and “Boot Scootin’ Boogie.” They went on to become the best-selling country duo of all time, with forty-one Top Ten hits (including twenty #1s) and two decades of packing concert arenas. They collected a mountain of music-industry honors, including two Grammys, nineteen CMA awards, and twenty-five ACM awards.

Their overnight success came with a backstory: Each member brought more than a decade of performing and songwriting experience to the partnership. 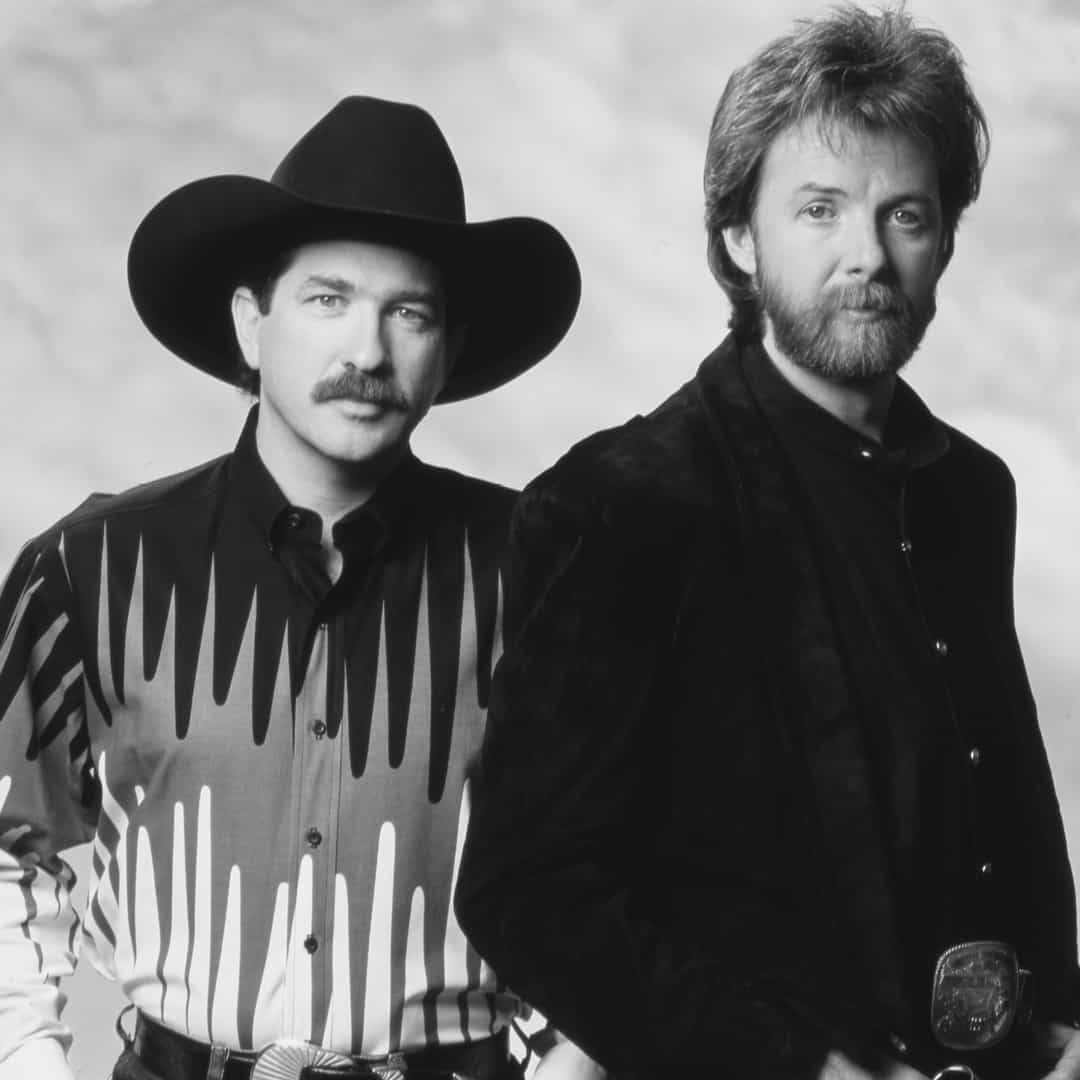 Ronnie Eugene Dunn—born June 1, 1953, in Coleman, Texas—said of his parents: “Dad was a hot-tempered, maniac honky-tonker. Mother was a Bible-carrying Baptist.” Dunn felt the pull of both worlds. He attended Abilene Christian College as a seminary student but left after school administrators chastised him for singing in bars. He moved in with his parents in Tulsa, where he hit nightclub stages with religious fervor.

Oklahoma music impresario Jim Halsey signed Dunn to independent Churchill Records in 1983, and the singer released several tradition-leaning singles on the label. After Dunn won the Marlboro Talent Search competition in 1988, he and his wife, Janine, relocated to Nashville.

Leon Eric Brooks III earned his nickname, Kix, because of his boisterous behavior in his mother’s womb. Later, the name fit his performance style, as he twirled, strutted, and kicked to dramatize Brooks & Dunn’s rocking arrangements. Born May 12, 1955, in Shreveport, Louisiana, Brooks was raised by his father, an oil company engineer, after his mother died when Kix was three years old.

While attending Louisiana Tech University, Brooks appeared regularly on the Louisiana club circuit. In 1979, he settled in Nashville with his wife, Barbara. He wrote several hits—including John Conlee’s “I’m Only in It for the Love” and the Nitty Gritty Dirt Band’s “Modern Day Romance”—before recording a solo album for Capitol Records in 1989.

As 1990 started, Dunn and Brooks were pursuing solo careers when Tim Dubois, head of Arista Nashville, surprised them by suggesting they form a duo. They hesitantly agreed, signed with Arista, and became Brooks & Dunn.

Their songwriting skills provided them with top-notch material. Their performance experience led them to create a dynamic stage show. Brooks’s raucous energy onstage brought fans to their feet; Dunn’s brooding presence and expressive voice encouraged fans to sing along.

The duo’s distinctive sound combined honky-tonk dancefloor rhythms with classic-rock guitar riffs and rousing arrangements. They packed songs with references to hard-working men, honky-tonks, rednecks, and women out on the town, enjoying themselves.

Under the guidance of producer Don Cook, Brooks & Dunn delivered three or four Top Ten songs every year from 1992 to 1998—including “Little Miss Honky Tonk,” “My Maria,” “How Long Gone,” and “If You See Him/If You See Her,” the latter a duet with Reba McEntire. But as they closed out a decade of massive success, Brooks & Dunn felt their momentum stall. Several consecutive singles fell short of the Top Ten—a first for the duo. At the 2000 CMA Awards, they went home empty-handed for the first time in eight years. “The fans didn’t go away,” Kix Brooks said. “We just weren’t giving them
good albums.”

The partners reacted by hiring a new producer, Mark Wright, and challenging themselves as songwriters. The resulting albums, Steers & Stripes (2001) and Red Dirt Road (2003), included several enduring songs, including the #1 hits “Ain’t Nothing ’Bout You,” “Only in America,” and “Red Dirt Road.”

The duo pumped life into their concerts by creating a carnival atmosphere. Their Neon Circus and Wild West Show, in 2001 and 2002, included confetti cannons, fireworks, hot air balloons, midway exhibits, and sideshow acts including professional clowns, fire-eaters, jugglers, stilt-walkers, and trick ropers. The CMA underscored Brooks & Dunn’s status as leading country stars by tapping them to host their top-rated network awards show from
2003 to 2006.

After six more years of hits—including “Play Something Country” and “You Can’t Take the Honky Tonk Out of the Girl”—the duo again dropped from favor
at radio. This time, the grind of recording albums and staging concert tours caught
up with them. After two decades together, Kix Brooks and Ronnie Dunn embarked on what they described as their final major tour, The Last Rodeo, and then ended
their partnership.

In January 2006, Brooks began hosting the syndicated radio program American Country Countdown. He served on the board of directors of the Country Music Association, becoming CMA president in 2004 and chairman in 2005. He opened Arrington Vineyards, a winery outside of Nashville. He resumed his solo career with New to This Town, issued by Arista in September 2012.

Dunn scored a hit with a power ballad, “Bleed Red,” in early 2011, and Arista’s release of the twelve-song Ronnie Dunn gave the veteran his first #1 album as a solo artist. He released two more albums in the next five years. At the 2015 ACM Awards, Brooks & Dunn reunited to perform “My Maria,” and they accepted the ACM 50th Anniversary Milestone Award. Two months later, with co-star Reba McEntire, Brooks & Dunn premiered Together in Vegas, at the Colosseum at Caesar’s Palace. The residency concerts marked their first full live performances together in five years. The residency series continues as an annual Las Vegas event.

In April 2019, Brooks & Dunn released Reboot, a new album featuring remakes of several of their best-loved songs in collaboration with contemporary
country stars.

Brooks & Dunn represent one of the most exciting and significant creative partnerships in American music history. They stood at the forefront of an innovative era when country music expanded its audiences and showed how the music could evolve, in sound and in concert production, while maintaining its working class rhythms and themes. That legacy carries Kix Brooks and Ronnie Dunn into the Country Music Hall of Fame.