One of the greatest stars of country music’s honky-tonk heyday, the 1950s, Webb Pierce had thirteen singles top the Billboard charts in those years—more than any of his illustrious contemporaries. 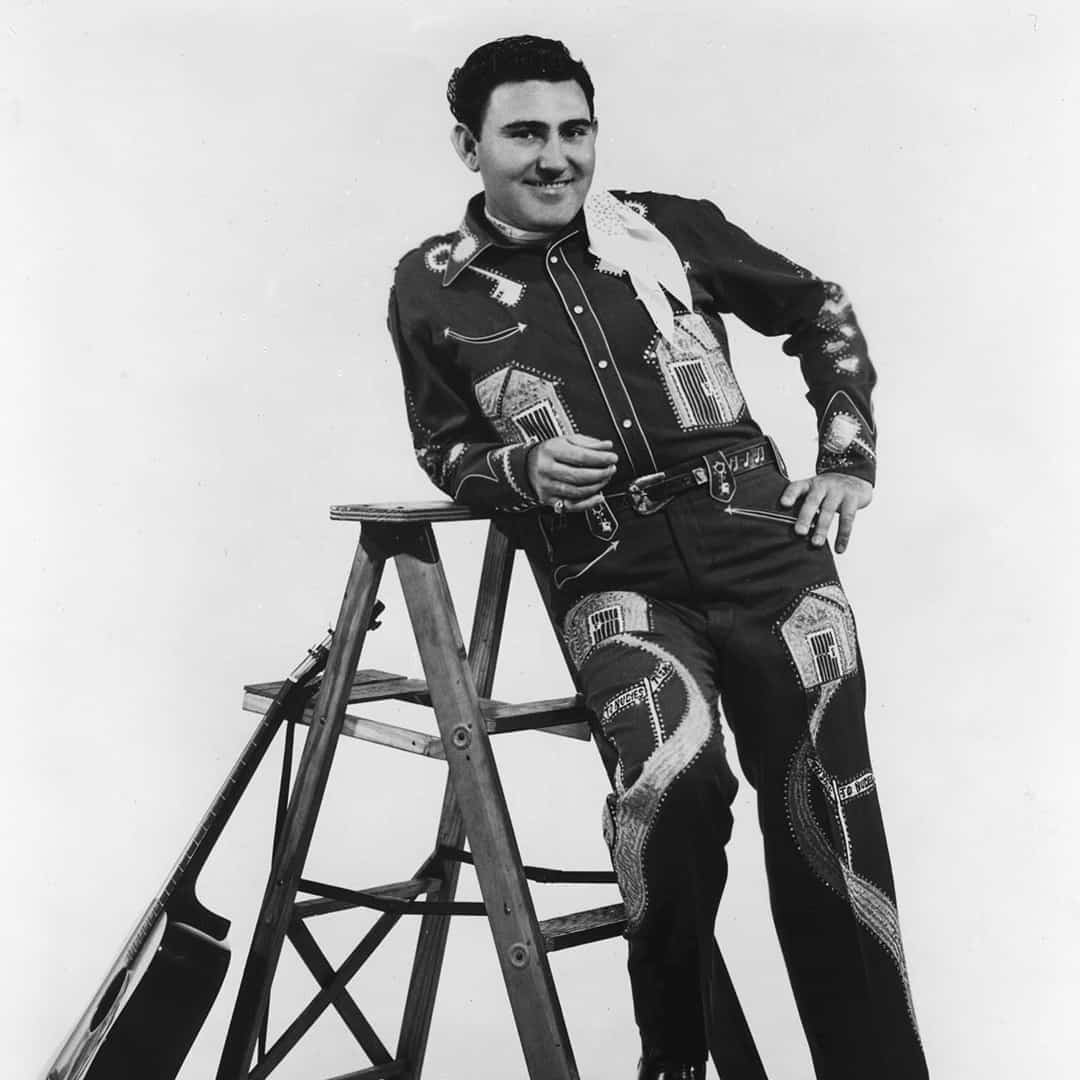 His loud, nasal, high-pitched, and sometimes slightly off-key delivery on hit after hit marked him as one of the music’s most distinctive singers in an era of great individualists.

A successful investor and wealthy man for much of his life, Pierce knew how to spend money to heighten his image, and he is perhaps as well remembered today for his silver-dollar-studded autos and guitar-shaped swimming pools as for his great music.

Born Webb Michael (or Mike) Pierce in West Monroe, Louisiana, five years earlier than his publicists generally claimed, he grew up with the music of Jimmie Rodgers, Gene Autry, western swing bands of Texas and Oklahoma, and the Cajun bands of his native state. He first sang professionally on KMLB in Monroe, but after a brief stint in the U.S. Army during the early days of World War II, he moved to Shreveport in 1944 and found early morning work on KTBS there.

For six years he worked for Shreveport’s Sears, Roebuck & Co. store in the men’s furnishings department, the whole time striving for a break in his singing career. Finally he moved to Shreveport’s fifty-thousand-watt giant, KWKH, and its Saturday night auditorium broadcast, the Louisiana Hayride. Building a band around himself with such future legends as Floyd Cramer (piano), Tillman Franks (manager and bass), Jimmy Day (steel guitar), Tex Grimsley (fiddle), Teddy and Doyle Wilburn and Faron Young (extra vocalists), Webb Pierce was soon the hottest act on that big show. With Hayride producer Horace Logan, Pierce launched a record label, Pacemaker, which featured several Hayride acts in addition to Pierce himself, who was by then also recording for California’s 4 Star Records. In late 1951, Pierce moved up to Decca and the next year scored his first big hit on that label with a version of the 1937 Cajun favorite, “Wondering,” which inspired his nickname and band name, the Wondering Boy(s).

Pierce followed “Wondering” with two more #1s, “That Heart Belongs to Me” and Billy Wallace’s honky-tonk anthem “Back Street Affair,” and on the strength of these joined the Grand Ole Opry in mid-1952. “It’s Been So Long” and “There Stands the Glass” (the latter banned in some radio markets), his best hits of 1953, established him as the field’s biggest star in the wake of Hank Williams’s death, and through 1955, huge hits for Pierce came with regularity: “Slowly” (on which Bud Isaacs’s pioneering pedal steel work won countless converts to that instrument), “Even Tho,” “More and More,” “In the Jailhouse Now,” “I Don’t Care,” “Love, Love, Love,” “Why, Baby, Why.” Small wonder that by mid-decade Pierce’s concert fee had risen near $1,250 per show, and advance orders for his new singles often reached 200,000 copies.

Pierce closely allied himself with Grand Ole Opry manager Jim Denny. They launched Cedarwood Music in 1953 and later jointly invested earnings from this and other ventures into the purchase of radio stations. But when Denny was fired in September 1956, for these and other outside interests conflicting with his Opry role, Pierce soon left, too. He was confident that he had outgrown the limits of Grand Ole Opry exposure and eager to do full-scale, full-paid concerts on Saturday nights instead of working the Opry for union scale wages. Already he had spent most of a year featured on ABC-TV’s Ozark Jubilee out of Springfield, Missouri, and soon he would find plenty of TV work and even film roles for producer Albert Gannaway in addition to his busy touring schedule. Though the rock & roll tide of 1956–59 slowed his record success somewhat, Pierce drew upon the growing stable of talented Cedarwood songwriters (Danny Dill, Wayne Walker, Marijohn Wilkin, and especially Mel Tillis) for good songs to record, and from the late 1950s came the memorable “I’m Tired,” “Honky Tonk Song,” and “Tupelo County Jail” (all three by Tillis, with whom Pierce even recorded a 1963 duet, “How Come Your Dog Don’t Bite Nobody But Me”).

After “Honky Tonk Song” in 1957, Top Ten records were fairly common until 1964—indeed, in 1959 “I Ain’t Never” hit #2 country and became his only Top Forty pop hit—but Pierce had no more #1s even though his singles regularly charted until 1972. Shortly thereafter, he left his twenty-plus year association with Decca/MCA, and recorded in the mid-1970s for Shelby Singleton’s Plantation Records, including a lament you’d expect from such a wealthy man, “The Good Lord Giveth (And Uncle Sam Taketh Away)” which charted poorly, and two unlikely and eminently forgettable duets with stage and film star Carol Channing (“Got You on My Mind” b/w “Love Brought Us Together”), which did not chart at all. By then, Webb Pierce was better known for his Curtiswood Lane home and guitar-shaped swimming pool—a regular stop on bus tours of Nashville—than for new hit records, but soon peace-loving neighbors went to court and took even that away from him.

Pierce’s star fared better in the 1980s. In 1982 Willie Nelson asked Pierce to sing with him on a remake of “In the Jailhouse Now.” It was Pierce’s ninety-sixth and last charted record, although young traditionalist Ricky Skaggs revived two of Pierce’s hits in that decade: “I Don’t Care” (1982) and “I’m Tired” (1987).

Pierce died of pancreatic cancer just as the Persian Gulf War was ending (February 24, 1991). Posthumous reissues have somewhat revived his reputation, and even those irritated by his at times abrasive personality share a widespread recognition of his commercial achievements and superstardom. A 2002 tribute album, Caught in the Webb (Audium), featured a broad range of artists including Pam Tillis, Willie Nelson, Rosie Flores, Charley Pride, Guy Clark, and the Del McCoury Band, among others. –Ronnie Pugh