Sons of the Pioneers

America’s premier western singing group was formed in 1933 by Ohio-born Leonard Franklin Slye, and was initially called the Pioneer Trio. 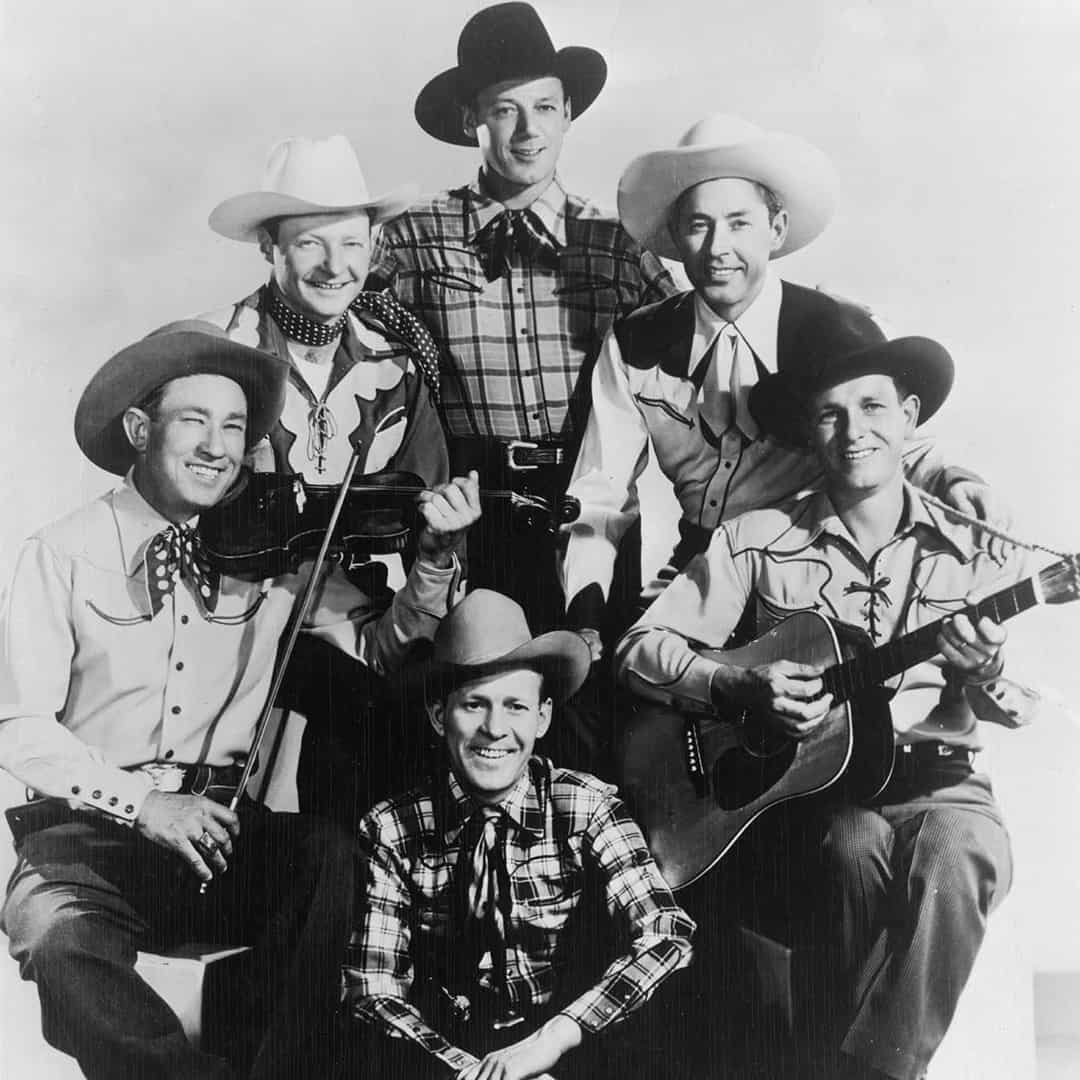 The group included Canadian-born Bob Nolan, and Tim Spencer of Oklahoma. In late 1933 or early 1934 the trio added Hugh Farr, one of the finest country fiddlers of that era, and in mid-1935 guitarist Karl Farr, Hugh’s brother, joined the quartet, bringing with him a unique skill that would influence musicians for years to come. Slye, Spencer, Nolan, and Hugh and Karl Farr are referred to by some as the “original” Sons of the Pioneers.

With a new name, Sons of the Pioneers, the group began a series of transcriptions for Standard Radio in late 1934, ushering in an exciting new genre of American roots music that featured unique western themes, a precise “block” singing style where three voices became one, and an impressive instrumental backup. Their smooth harmony was widely admired and was soon emulated by almost every western singing group in America. In addition, they may have been the first western group to feature trio yodeling.

The songs composed by Bob Nolan and Tim Spencer—such as “Tumbling Tumbleweeds,” “Cool Water,” “Blue Prairie,” “Way Out There,” “The Everlasting Hills of Oklahoma,” “Happy Rovin’ Cowboy,” “Room Full of Roses,” and “A Cowboy Has to Sing”—were decidedly different from what previously had been heard in western music, in lyrical and melodical quality. Many of their compositions were inspired by the Pioneers’ participation in a large number of B-western movies, first in 1935 with Charles Starrett, then in 1941 with their old friend Leonard Slye, who now had assumed the studio name of Roy Rogers and who was rivaling Gene Autry for the title of America’s favorite singing cowboy star.

The Pioneers were third in order to be signed by the fledging American branch of Decca Records in 1934, following Bing Crosby and cowboy singer-composer Stuart Hamblen. The Pioneers’ Decca recordings proved to be highly popular with fans. In late 1936 tenor Lloyd Perryman joined the group. Comedian-bass player Pat Brady replaced Roy Rogers, who had left to join Republic Pictures in 1937.

Signing with RCA Victor in 1945, while Ken Carson, Perryman’s wartime replacement, was still a member, the Sons of the Pioneers proved to be one of Victor’s most popular attractions, remaining with the label until 1969. The early group remained intact until 1949, when both Spencer and Nolan retired and were replaced by Ken Curtis and Tommy Doss. Hugh Farr left in 1958, and Karl Farr suffered a heart attack and died on stage in Springfield, Massachusetts in 1961. Upon the departure of Curtis in 1952, Dale Warren joined. Following the death of Lloyd Perryman in 1977, Warren, who remained until his death on August 8, 2008, took over the leadership of the Sons of the Pioneers, guiding them into the 2000s. They continued to perform in concert and recorded as well with a lineup that featured, among many others, Doye O’Dell (guitar, vocals), Billy Armstrong (fiddle), Billy Liebert (accordion), Gary LeMaster (lead guitar) and Rome Johnson (vocals).