William Owen Bradley produced the hits of numerous Country Music Hall of Famers. He built the first music business on Music Row and was nominated for an Academy Award. 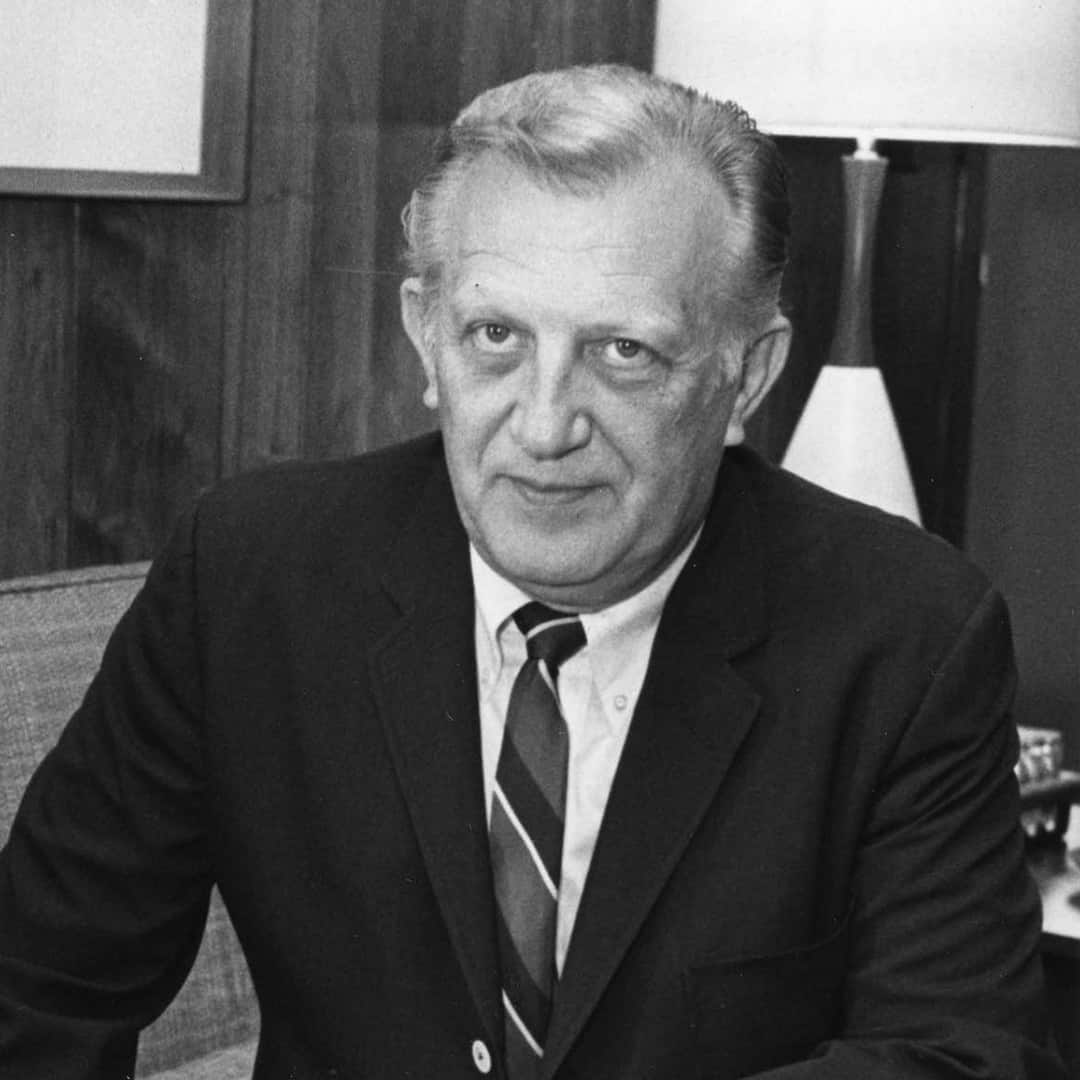 In addition, Bradley is an architect of the Nashville Sound.

The Bradley family moved to Nashville when Owen was a boy. He was fascinated with music and learned harmonica, steel guitar, trombone, piano, vibraphone, and organ. He was working professionally as a musician by age fifteen.

By the late 1930s Bradley was leading his own band, which eventually included future pop stars Snooky Lanson and Kitty Kallen as vocalists. He broadcast on WLAC during 1937–1940, then became a regular on WSM. Decca executive Paul Cohen noted Bradley’s studio skills during his recording visits to Nashville, and in 1947 he hired Bradley to open Decca’s Nashville office and lead the label’s sessions there.

In addition to those duties and co-writing songs like Roy Acuff’s 1942 hit “Night Train to Memphis,” Bradley found time for his own recording career. “Zeb’s Mountain Boogie,” issued as by “Brad Brady and His Tennesseans,” launched Bullet Records in 1946. Bradley’s group had additional hits on Coral in 1949 (“Blues Stay Away from Me”) and in 1950 (“The Third Man Theme”).

One of Bradley’s first big production successes was Red Foley’s 1950 million seller “Chattanoogie Shoe Shine Boy,” which shot to #1 on both the country and pop charts. That same year Bill Monroe signed with Decca and Bradley began producing a string of bluegrass classics. He started working with honky-tonk masters Ernest Tubb and Webb Pierce in 1947 and 1952, respectively. He also led the session yielding a recording that revolutionized the place of women in country music, Kitty Wells’s 1952 blockbuster “It Wasn’t God Who Made Honky Tonk Angels.”

Following the example of the Castle Recording Laboratory, where Bradley led many early Nashville sessions, Owen and his brother Harold Bradley were among the first to build independent recording studios in Nashville. Paul Cohen was contemplating relocating Decca’s country headquarters to Dallas, but in 1955, Bradley promised him a Nashville recording facility in an old house at 804 16th Avenue South; the Bradleys later added an army surplus Quonset hut behind it to use as a film and recording studio.

Owen Bradley was named head of Decca’s Nashville division in 1958, from which position he helped shape the evolution of the Nashville Sound. Like Chet Atkins, his counterpart at RCA, Bradley put singers out front, using rhythm sections consisting of guitars, bass, drums, and piano to provide basic support and adding background harmony parts or string sections as needed. The resulting music was easily accessible to a wide range of listeners. In addition to turning out hits by Decca’s country acts, Bradley also produced a Grammy-winning record for folk star Burl Ives (1962) and attracted Dixieland clarinetist Pete Fountain and pop organist Lenny Dee to Nashville. Bradley himself scored pop hits for Decca in 1957 (“White Silver Sands”) and 1958 (“Big Guitar”).

Many consider Bradley’s productions with Decca female vocalists to be his finest. He produced numerous Top Ten hits with Kitty Wells, and his collaborations with Patsy Cline remain the standard against which female country records are measured to this day. Brenda Lee had twelve Top Ten pop hits produced by Bradley in the early 1960s, and he also produced the fifty-plus hits that made Loretta Lynn a country legend.

By the early 1960s Bradley’s studio was hosting 700 sessions annually and had been joined by similar businesses in a district that would come to be known as Music Row. Columbia Records bought the studio from Bradley in 1962 and built the label’s Nashville headquarters around it. Columbia continued to use that studio for recording until 1982.

In 1965, Bradley converted a Mt. Juliet, Tennessee, barn into another studio. “Bradley’s Barn,” as it was called, was used by Gordon Lightfoot, Joan Baez, the Beau Brummels, and other pop acts, as well as dozens of country artists. Meanwhile, Bradley continued to sign important artists to Decca, most notably Conway Twitty.

Bradley was inducted into the Country Music Hall of Fame in 1974. He stepped down as a label head late in 1976 (by which time Decca had been completely absorbed into MCA), to become an independent producer and work with his publishing firm, Forest Hills Music. He built yet another studio after Bradley’s Barn was destroyed by fire in 1980.

In the 1990s, Bradley produced records for Marsha Thornton, Brenda Lee, and Pete Fountain, and went into semi-retirement. The Recording Academy gave him its Governors Award at a 1995 gala, and the (temporarily) reactivated Decca label saluted him with a 1996 compilation called The Nashville Sound.

Bradley founded a musical dynasty. Son Jerry led RCA’s Nashville operations for a time, then took the reins of the Opryland Music Group for a number of years. He is now president of the Forrest Hills Music publishing firm. Daughter Patsy was a longtime executive at Broadcast Music, Inc. (BMI) in Nashville, and grandson Clay has worked for BMI and as a recording executive for Sony Music’s Nashville operation. Nephew Bobby Bradley Jr. is a studio engineer. Daughter-in-law Connie served for many years as the head of Nashville’s ASCAP office. Younger brother Harold became one of the world’s most recorded session guitarists and the longtime president of the Nashville chapter of the American Federation of Musicians. – Robert K. Oermann