James Charles Rodgers, known professionally as the “Singing Brakeman” and “America’s Blue Yodeler,” was the first performer inducted into the Country Music Hall of Fame. 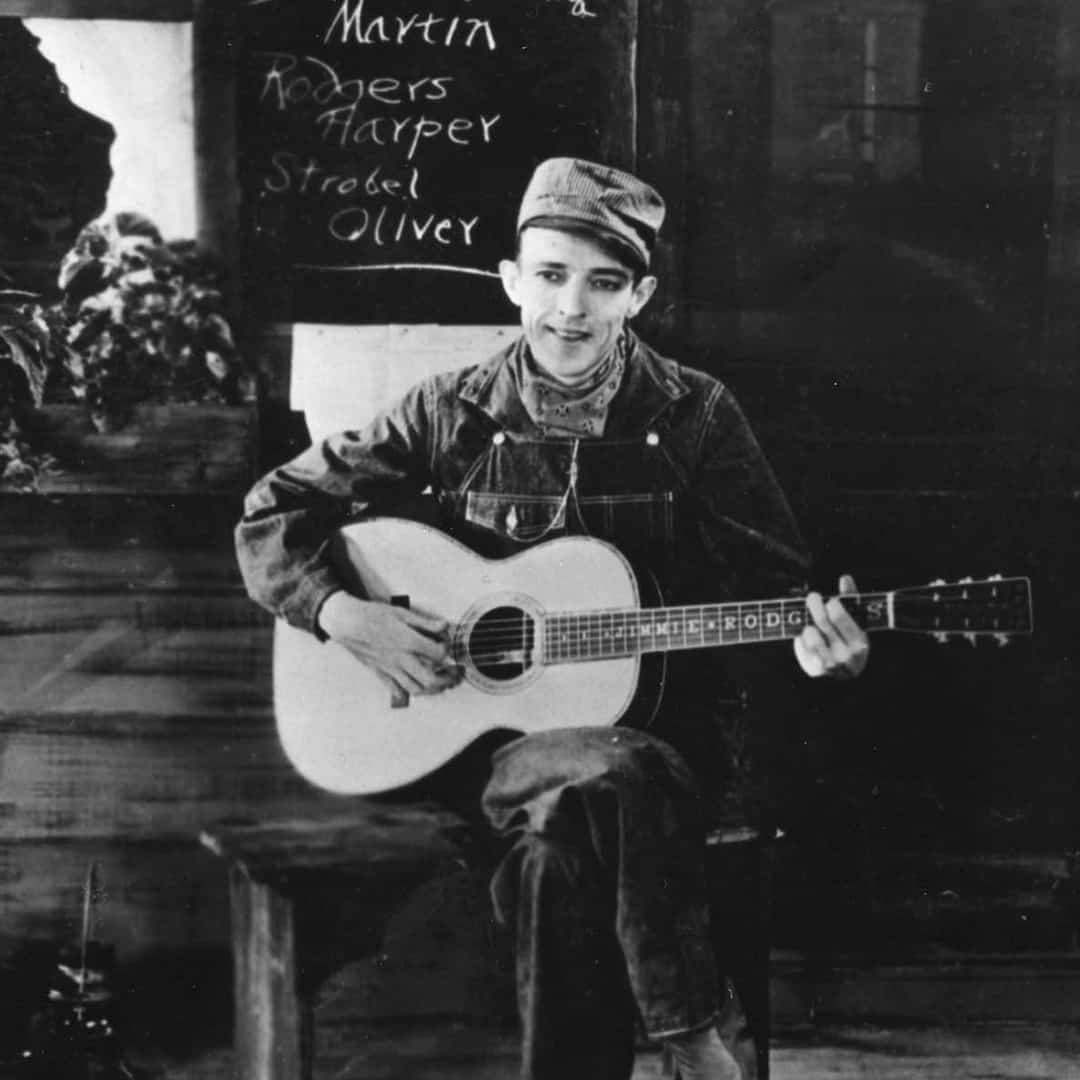 He was honored as the Father of Country Music, “the man who started it all.” From many diverse elements—the traditional melodies and folk music of his southern upbringing, early jazz, stage show yodeling, the work chants of railroad section crews and, most importantly, African-American blues—Rodgers evolved a lasting musical style which made him immensely popular in his own time and a major influence on generations of country artists.

Gene Autry, Ernest Tubb, Hank Snow, Lefty Frizzell, Bill Monroe, Johnny Cash, Merle Haggard, Tanya Tucker, and Dolly Parton are only a few of the dozens of stars who have acknowledged the impact of Jimmie Rodgers’s music on their careers.

Rodgers was the son of a railroad section foreman but was attracted to show business. At thirteen he won an amateur talent contest and ran away with a traveling medicine show. Stranded far from home, he was retrieved by his father and put to work on the railroad. For a dozen years or so, through World War I and into the 1920s, he rambled far and wide on “the high iron,” working as call boy, flagman, baggage master, and brakeman, all the while polishing his musical skills and looking for a chance to earn his living as an entertainer.

After developing tuberculosis in 1924, Rodgers gave up railroading and began to devote full attention to his music, organizing amateur bands, touring with rag-tag tent shows, playing on street corners, taking any opportunity he could find to perform. Success eluded him until the summer of 1927. In Asheville, North Carolina, he wangled a regular (but unpaid) spot on local radio station WWNC and persuaded the Tenneva Ramblers, a stringband from Bristol, Tennessee-Virginia, to join him as the Jimmie Rodgers Entertainers. When the radio program was abruptly canceled, they found work at a resort in the Blue Ridge Mountains. There they learned that Ralph Peer, an agent for the Victor Talking Machine Company, was making field recordings in Bristol, not far away. Rodgers quickly loaded up the band, went to Bristol, and succeeded in gaining an audition with Peer. Before they could record, however, the group quarreled over billing and broke up. Deserted by the band, Rodgers persuaded Peer to let him record alone, accompanied only by his own guitar.

Prompted by the public’s unusually strong response to Rodgers’s first release (“Sleep, Baby, Sleep,” paired with “The Soldier’s Sweetheart”), Peer arranged for Rodgers to record again in November at Victor’s home studios in Camden, New Jersey. From this session came the immortal “Blue Yodel (T for Texas),” Rodgers’s first big hit. Within months he was on his way to national stardom, playing first-run theaters, broadcasting regularly from Washington, D.C., and signing for a vaudeville tour of major Southern cities on the prestigious Loew Circuit.

In the ensuing five years he traveled to Victor’s studios in numerous cities across the nation, including New York and Hollywood, eventually recording 110 titles, including such classics as “Waiting for a Train,” “Daddy and Home,” “In the Jailhouse Now,” “Frankie and Johnny,” “Treasures Untold,” “My Old Pal,” “T. B. Blues,” “My Little Lady,” “The One Rose,” “My Blue-Eyed Jane,” “Miss the Mississippi and You,” and the series of twelve sequels to “Blue Yodel” for which he was most famous. In 1929 Rodgers appeared in a movie, The Singing Brakeman, a fifteen-minute short made in Camden by Columbia. Best known for his solo appearances on stage and record, he also worked with many other established performers of the time, touring in 1931 with Will Rogers (who jokingly referred to him as “my distant son”) and recording with such country music greats as the Carter Family, Clayton McMichen, and Bill Boyd, and in at least one instance with a jazz star of major national prominence, Louis Armstrong, who appears with him on “Blue Yodel No. 9.” One of the first white stars to work with black musicians, Rodgers also recorded with the fine St. Louis bluesman Clifford Gibson.

Rodgers’s career reached its high point during the years 1928 to 1932. By late 1932 the Depression was taking its toll on record sales and theater attendance, and Rodgers’s failing health made it impossible for him to pursue the movie projects and international tours he had planned. Through the spring of 1933 he tried, with little success, to book personal appearances. In May he went to New York to fulfill his contract with RCA Victor for twelve more recordings. It took him a week to finish these sessions, resting between takes. Two days later, on May 26, he collapsed on the street and died a few hours later of a massive hemorrhage in his room at the Hotel Taft.

Jimmie Rodgers’s impact on country music can scarcely be exaggerated. At a time when emerging “hillbilly music” consisted largely of old-time instrumentals and lugubrious vocalists who sounded much alike, Rodgers brought to the scene a distinctive, colorful personality and a rousing vocal style which in effect created and defined the role of the singing star in country music. His records turned the public’s attention away from rustic fiddles and mournful disaster songs to popularize the free-swinging, born-to-lose blues tradition of cheatin’ hearts and faded love, whiskey rivers and stoic endurance. Although Rodgers constantly scrabbled for material throughout his career, his recorded repertoire was remarkably broad and diverse, ranging from love songs and risqué ditties to whimsical blues tunes and even gospel hymns. There were songs about railroaders and cowboys, cops and robbers, Daddy and Mother, and home—plaintive ballads with all the nostalgic flavor of traditional music but invigorated by a distinctly original approach and punctuated by Rodgers’s yodel and unorthodox runs, which became his trademarks. – Nolan Porterfield