As a singer, songwriter, bandleader, showman, and instrumentalist, no individual is so closely identified with an American musical style as Bill Monroe, the Father of Bluegrass Music. 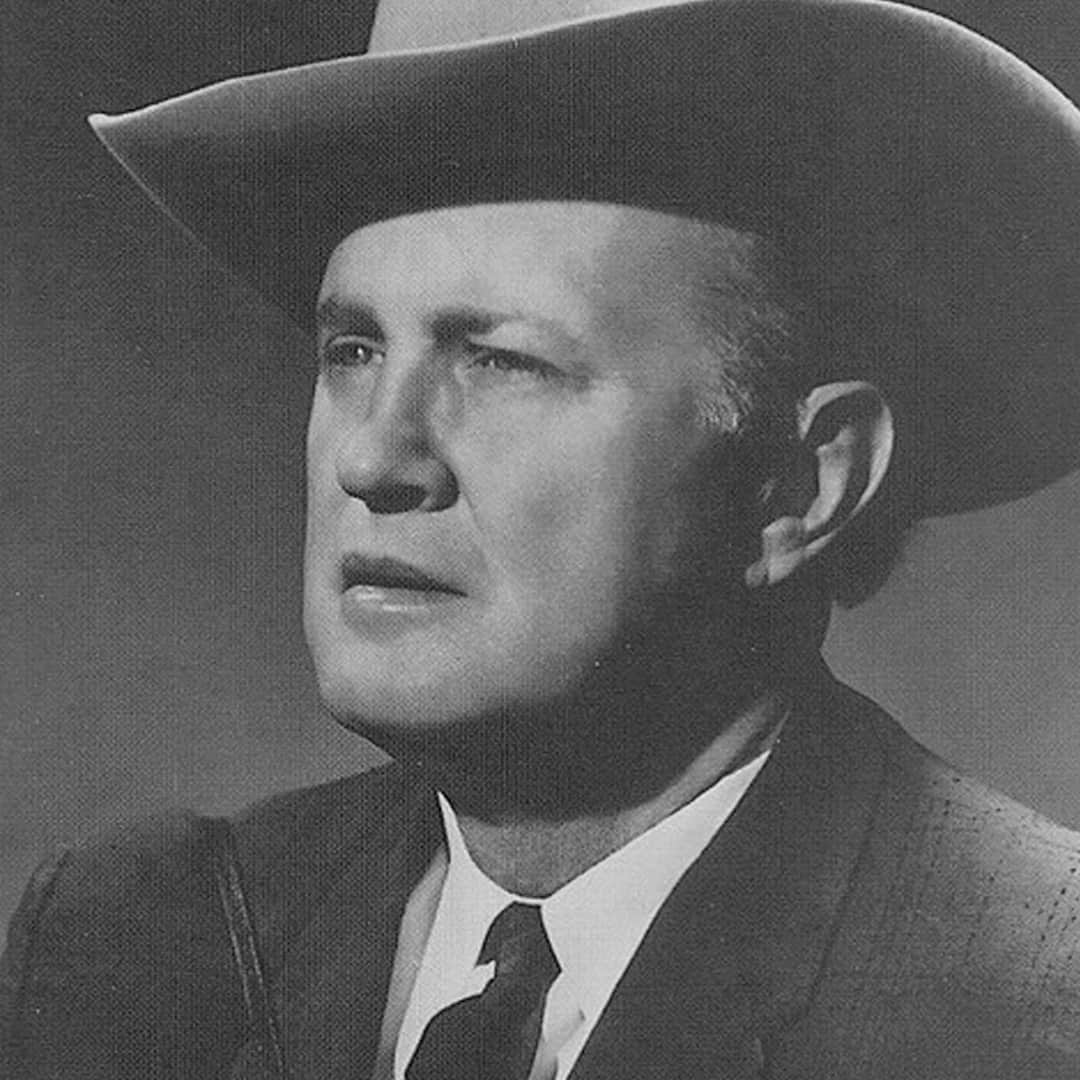 For more than half a century, he shaped bluegrass with his forceful mandolin playing, high, lonesome singing, and mastery of his band, the Blue Grass Boys. In doing so, he gave older country sounds new life, gave the mandolin a new role as a lead instrument in country, pop, and rock, and set standards for musicians as diverse as the Everly Brothers, Elvis Presley, George Jones, and rock star Jerry Garcia.

William Smith Monroe was the youngest of eight children born to of James Buchanan “Buck” Monroe, a prosperous farmer who also ran timber and mining operations, and Malissa Monroe, who kept house and helped pass along dance steps and British-American folksongs to her children. Other musical influences of Bill’s youth include the old-time fiddling of his uncle Pendleton “Uncle Pen” Vandiver and the bluesy guitar playing of Arnold Shultz, a black musician with whom Bill and Uncle Pen sometimes worked local dances.

Monroe lost both his parents by the age of sixteen, and subsequently he followed some of his brothers north to the Chicago area, where he labored in a Sinclair Oil refinery, performed as a square dancer on Chicago’s WLS National Barn Dance, and sang and played mandolin with brothers Charlie (who played guitar) and Birch (who fiddled) on local radio. Birch soon left the trio, and Bill and Charlie decided to pursue music full time as the Monroe Brothers, first gaining exposure on stations in Iowa and Nebraska.

The Monroes really hit their stride, however, after moving in 1935 to the Carolinas, where they based themselves mainly at Charlotte, North Carolina’s 50,000-watt WBT. Their popularity soon equaled that of any of the era’s many duos, and they distinguished themselves by their hard-driving tempos, piercing harmony, and Bill’s lightning-fast mandolin solos. In 1936 RCA producer Eli Oberstein recorded them for the first time. Early releases like “What Would You Give in Exchange for Your Soul” sold well, and before long the team was winning a sizable regional audience with help from WBT’s signal and recorded radio shows. However, the headstrong Monroes feuded as brothers will, and the act broke up in 1938. Bill would record two more sessions for RCA with his new band, the Blue Grass Boys, named for Kentucky, the Bluegrass State.

After rehearsing his group and working Carolina radio, Monroe headed for Nashville to audition for the Grand Ole Opry. WSM’s George D. Hay, Harry Stone, and David Stone, impressed with Monroe’s talent and star power, hired him in October 1939 on the strength of his performance of his trademark “Mule Skinner Blues,” formerly a hit for the legendary Jimmie Rodgers. WSM’s 50,000-watt transmitter and guest spots on the Opry’s NBC network portion quickly made Monroe’s name a household word. By 1943 he was grossing some $200,000 a year from show dates, many of them staged as part of his own Opry tent show, which combined music and comedy in delighting rural and small-town audiences throughout the South.

While no one was yet calling Monroe’s style “bluegrass” (this would not come until the mid-1950s), many of its basic elements were already present, including its pulsing drive and the intensity of Monroe’s high-pitched vocals. During World War II he added the banjo, first played by David “Stringbean” Akeman, and experimented briefly with the accordion and harmonica, which complemented the basic mandolin-guitar-fiddle-bass combination he would always retain. (Where guitar was concerned, Monroe himself was a formidable instrumentalist and set high benchmarks for his band members through the years.) In 1945 he added the revolutionary three-finger banjo picking of Earl Scruggs, which provided bluegrass with its final building block. Monroe’s late-1940s recordings for Columbia, made with Scruggs and Lester Flatt, his singer-guitarist at the time, are now widely regarded as definitive.

In 1948 Scruggs teamed with Flatt to form the Foggy Mountain Boys, and by the early 1950s several bands were playing their own variations of the bluegrass style, including the Stanley Brothers, Jim and Jesse McReynolds, and Reno & Smiley. Monroe made his band sound higher, bluer, and more lonesome than ever, with help from singer-guitarist Jimmy Martin and other expert sidemen, some of whom (including Martin) later launched bluegrass bands of their own. As ever, his repertoire included both sacred and secular material as well as both songs and instrumentals, and he composed much of his material himself or with members of his band. Over the years, Monroe originals like “Uncle Pen,” “Raw Hide,” “Blue Moon of Kentucky,” “Jerusalem Ridge,” “I Want the Lord to Protect My Soul,” and dozens of others have formed the basis of the bluegrass canon for professionals and amateurs alike.

Through the 1950s and beyond, Monroe’s acoustic sound provided an alternative to honky-tonk, country-pop, and rockabilly. By 1963 he began to attract the attention of the urban folk music audience, with help from folklorist and promoter Ralph Rinzler, who promoted Monroe as the true Daddy of Bluegrass to listeners who thought bluegrass began and ended with Flatt and Scruggs. The year 1965 saw the first multi-day bluegrass festival making Monroe the centerpiece, and in 1967 he launched his own annual festival at Bean Blossom, Indiana, where he had long run a country music park. By 1970, when he won election to the Country Music Hall of Fame, he had become the acknowledged patriarch of the bluegrass movement, a cult figure to hordes of fans for whom bluegrass was akin to a religion.

Until his death, Monroe continued to propagate the gospel of bluegrass to worldwide audiences, appearing in all fifty states and Canada as well as on tours of Japan, England, Ireland, Holland, Switzerland, and Israel. His venues ranged from rural festivals to urban performing arts centers and the White House. He kept recording as well, and his career total topped more than 500 selections, most of them made for MCA (formerly Decca).

Monroe also won recognition for his accomplishments. In 1982 the National Endowment for the Arts gave him its prestigious National Heritage Fellowship, and in 1988 he won a Grammy for his album Southern Flavor—the first bluegrass Grammy ever bestowed. A 1991 inductee into the International Bluegrass Music Association Hall of Honor, Monroe was also a 1993 recipient of the Lifetime Achievement Award from the National Academy of Recording Arts and Sciences (NARAS), an honor that placed him in the company of Louis Armstrong, Chet Atkins, Ray Charles, Paul McCartney, and other legends. Although bluegrass constitutes only a small part of country music’s annual sales, such honors testify to the enormous influence Monroe’s music continues to exert among musicians in many fields.

A stroke suffered in April 1996 ended Monroe’s career as a touring artist and hastened his death on September 9 of that year. “We all knew that if he ever got to the point where he couldn’t perform that he wasn’t going to make it,” said Emmylou Harris. “Music was his life.” Memorial services at Nashville’s Ryman Auditorium and later in Monroe’s native Rosine, Kentucky, where he is buried, united hundreds of friends and fellow musicians who continue to nurture his legacy as one of country music’s great historical personalities. –John Rumble