In country music’s long tradition of brother duet singing, Ira and Charlie Louvin served as the link between the Delmore Brothers and the Everly Brothers. 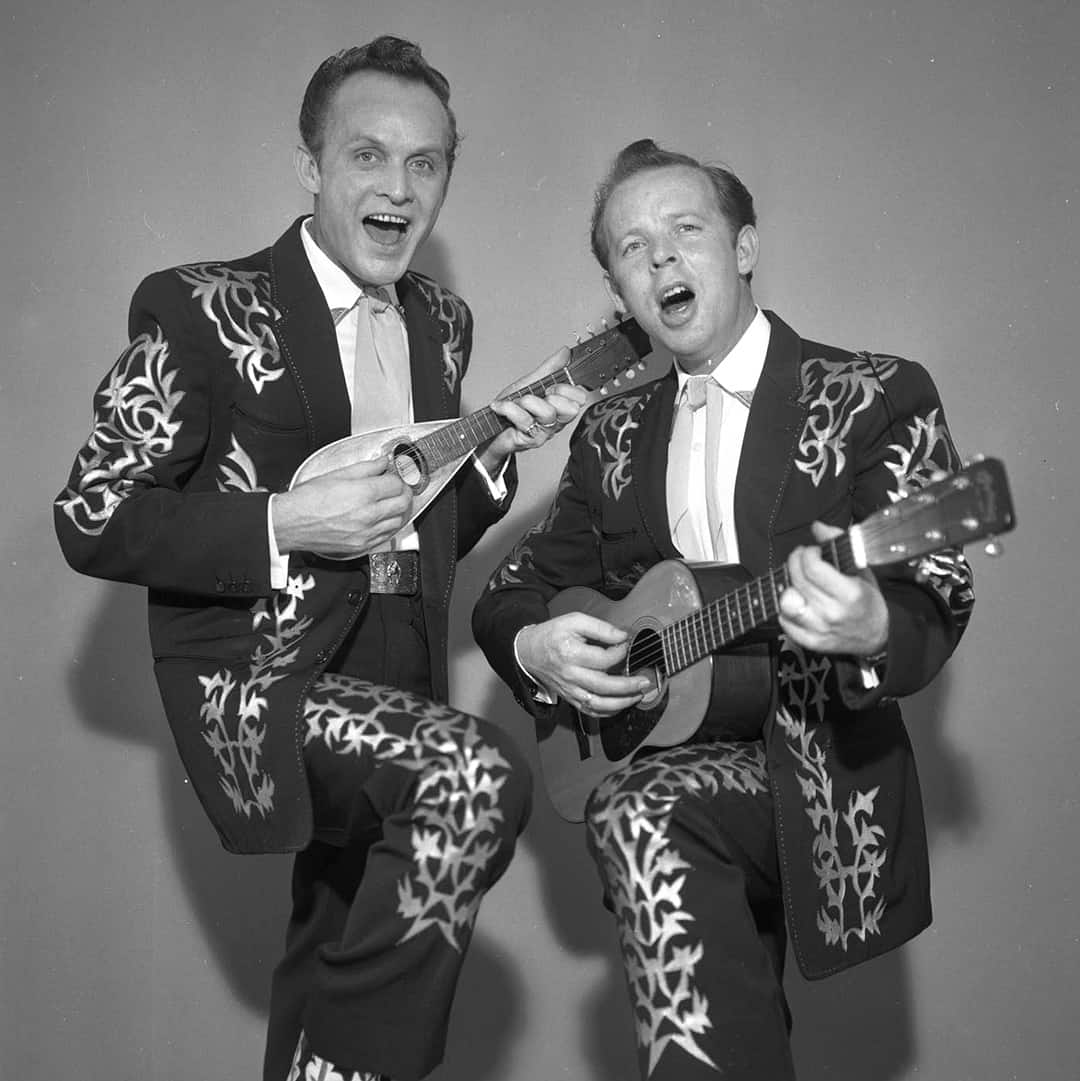 More important, the Louvin Brothers’ stratospheric vocal interplay made them arguably the most influential harmony duet in country music history, touching everybody from Emmylou Harris to the cowpunk band Rank & File.

When I Stop Dreaming – The Louvin Brothers

My Baby’s Gone – The Louvin Brothers

Cash on the Barrelhead – The Louvin Brothers

First cousins of singer-songwriter John D. Loudermilk, Ira and Charlie grew up in a poor farm family in northeastern Alabama, mostly in Henegar. Ira mastered the mandolin, and Charlie picked guitar. The brothers first performed as the Radio Twins in 1942, worked in Chattanooga with a band called the Foggy Mountain Boys in 1943, and changed their name to the Louvin Brothers in 1947 while working at WROL in Knoxville, because they wanted a professional name that was easier to pronounce and spell. They spent considerable time in Memphis, and they debuted on the Grand Ole Opry in Nashville in 1955.

The Louvins recorded for Apollo in 1947, Decca in 1949, and MGM in 1951 and 1952, yet their early recording dates were sporadic, in part because of Charlie’s military service in Korea. They did not achieve great commercial success until they began recording for Capitol in September 1952, an affiliation that would continue until the Louvins broke up in August 1963. Although the duo’s biggest hits for Capitol were released in 1955 and 1956, during the early days of rock & roll, their musical style was already defiantly anachronistic. Their high, lonesome harmonies, punctuated by Ira’s stirring mandolin solos, were closer to country music of the 1930s than the honky-tonk or country-pop of the mid-1950s. As a sign of their traditionalism, their first three Top Ten singles, “When I Stop Dreaming,” the chart-topping “I Don’t Believe You’ve Met My Baby,” and “Hoping That You’re Hoping,” didn’t include drums. They mixed gospel and secular forms, often focusing on the traditional themes of family, love, and obligation that link the two.

In the late 1950s a changing market and Ira’s erratic, tempestuous behavior contributed to the brothers’ sinking commercial fortunes. Capitol producer Ken Nelson made several attempts to update the duo’s sound, including an ill-fated series of recordings without Ira’s trademark mandolin, but 1959’s “My Baby’s Gone” was their last Top Ten hit. Increasing personal tensions led to the pair’s 1963 breakup, after which each brother embarked on a separate career. Ira’s 1965 album, The Unforgettable Ira Louvin, which featured electric mandolin and electric guitar, turned out to be his only solo LP; he died in a car crash in Missouri on June 20, 1965—three months after completing the album. Charlie’s solo career began with two Top Ten hits (“I Don’t Love You Anymore” and “See the Big Man Cry”), but through the 1970s and 1980s he became best known as a fixture on weekly Opry broadcasts.

In 1996 Watermelon Records released Charlie’s album The Longest Train, on which he was joined by guest performers such as Barry and Holly Tashian and Jim Lauderdale. Livin’, Lovin’, Losin’: Songs of the Louvin Brothers (2003), a tribute album produced by Carl Jackson and showcasing many top singers in folk, country, and rock, won a Grammy for Best Country Album. In 2007 Charlie released a Grammy-nominated self-titled album on the Tompkins Square label featuring George Jones, Elvis Costello, and Tom T. Hall, among others. Steps to Heaven, consisting of traditional gospel numbers, followed in 2008, as did Charlie Louvin Sings Murder Ballads and Disaster Songs. In 2010 Charlie Louvin released an album of war songs, The Battle Rages On, and the EP Back When We Were Young.  Charlie died on January 26, 2011, after battling pancreatic cancer.

The Louvin Brothers were elected to the Country Music Hall of Fame in 2001. –Jimmy Guterman