Roy Rogers earned the title “King of the Cowboys” for his enormous popularity in films, on television and radio, and in personal appearances. 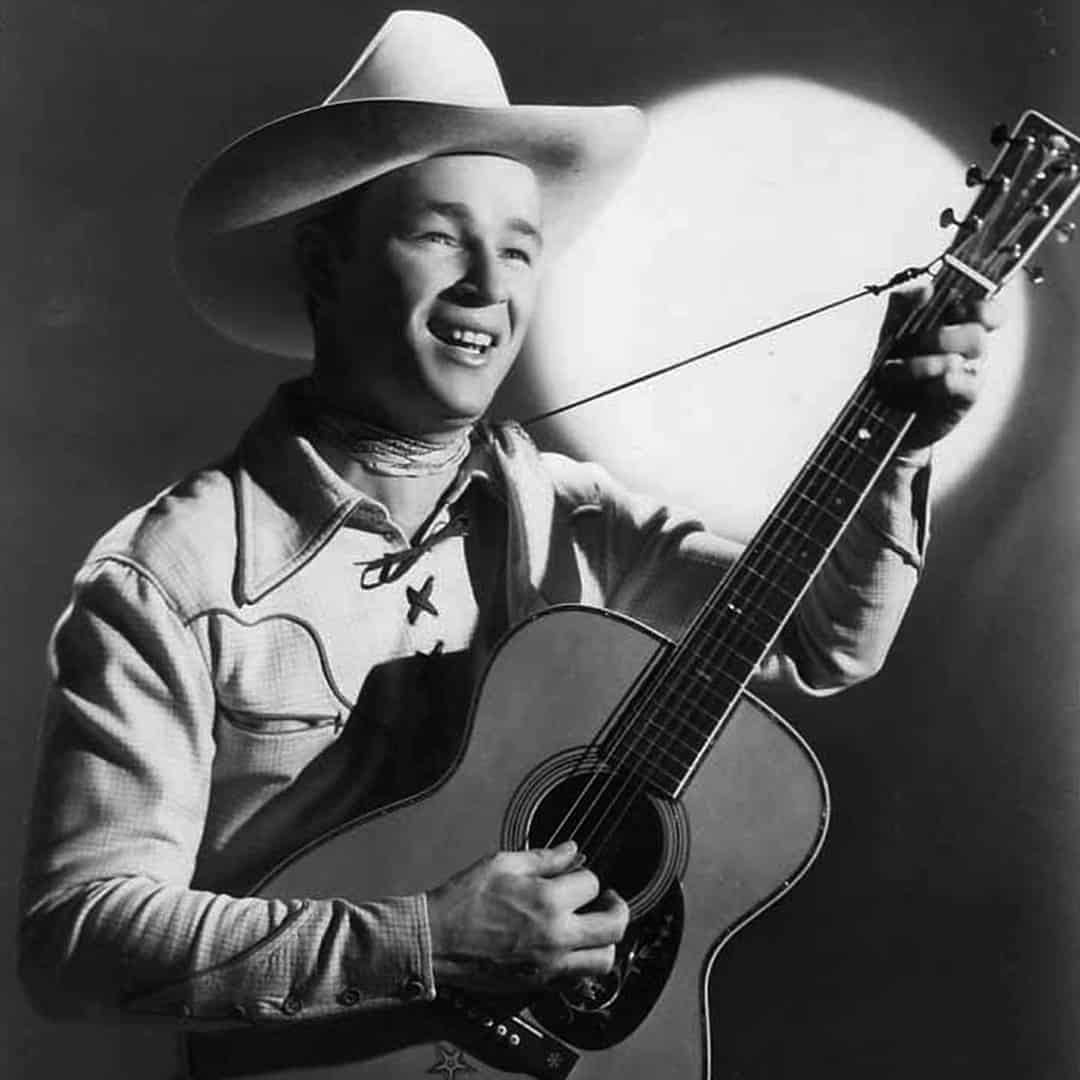 But before starring in his first film, Rogers earned his eventual place in the Country Music Hall of Fame by founding the Sons of the Pioneers.

Born Leonard Franklin Slye, Rogers was raised on a farm in Duck Run, Ohio. In June 1930 the Slye family visited one of Roy’s sisters in California. The lure of warm weather and the hope of better job prospects led Rogers and his family to move to Los Angeles. Still, the Great Depression made jobs hard to find. Rogers drove a gravel truck and then worked as a fruit picker in the same central California farm camps John Steinbeck wrote about in The Grapes of Wrath.

Rogers had grown up playing mandolin and calling square dances. When his sister encouraged him to appear on a local radio program that featured amateurs, he reluctantly gave it a try. A few days later he was asked to join a country music band called the Rocky Mountaineers, as a singer and guitarist. Before long he convinced them to add another vocalist so they could harmonize together. Bob Nolan was hired, and when he left the group, Tim Spencer replaced him. Over the course of the next two years, Rogers sang with a variety of country music groups, each of which was less successful than the one before. Finally, late in the summer of 1933, he decided to give it one more try by forming a group consisting of himself, Bob Nolan, and Tim Spencer. The Pioneer Trio, as they originally called themselves, worked on their harmonies while Nolan and Spencer began writing the songs that would become the heart of their repertoire.

Los Angeles radio station KFWB hired the group and a few months later gave them their own program. The Pioneers’ unique harmony and their fine original songs—such as “Cool Water” and “Tumbling Tumbleweeds”—led to a series of radio transcriptions, a Decca record contact, and film appearances in westerns, including two with Gene Autry. In October 1937 Rogers heard that Republic Pictures was auditioning for a new singing cowboy. Although he didn’t have an appointment, he managed to get into the studio and gain an audition. His screen test led to a contact and a change of name to Roy Rogers.

When Gene Autry walked out on his contract, Rogers was given the starring role in Under Western Stars, which had been scheduled to be Autry’s next film. The tremendous success of Rogers’s first film marked the emergence of a new star. By 1943 Rogers was the top western star at the box office. He retained this rank until he made the transition into television early in the 1950s. He also maintained a heavy schedule of personal appearances, most of them featuring his beloved horse, Trigger, who received near-equal billing.

In 1944 Dale Evans was cast as Rogers’s leading lady in Cowboy and the Señorita. The chemistry between them was apparent both to audiences and to the studio. Over the next five years Evans was featured in Rogers’s next nineteen films. A little more than a year after the death of his first wife, Rogers and Evans married, on New Year’s Eve 1947. A few years later the couple began their NBC network television series, which quickly became a favorite with Sunday night family viewers.

Roy Rogers’s success in films, radio, television, on records, and in personal appearances was offset by a long series of tragedies. His first wife, Arlene, the mother of his first three children, died a week after the birth of their third child, Roy Jr., in 1946. Robin, the only child born to Rodgers and Evans, suffered from Down syndrome and died in 1952, shortly before her second birthday. Rodgers and Evans eventually adopted four children from different ethnic and social backgrounds, only to lose two of them tragically. Debbie, an orphan they adopted from Korea, died in a church bus accident. Their son Sandy, who had suffered some brain damage due to physical abuse before being adopted by Rodgers and Evans, died while serving in the Army.

Each of these losses took a tremendous toll on Rogers and Evans, but the couple’s religious faith sustained them. Their positive outlook as they confronted life’s challenges only added to the public’s regard for them.

Roy Rogers is the only person to be elected twice to the Country Music Hall of Fame: first in 1980 as a member of the original Sons of the Pioneers, and then in 1988 as an individual, for his own career achievements. Rogers was a hero to audiences who saw him in films, at rodeos or state fairs, in television appearances, or at visits to his museum in Victorville, California. To fans throughout the world, the King of the Cowboys was one of the most beloved of Americans. Rogers died on July 6, 1998, sixty years after making his first motion picture. – Laurence Zwisohn