The dean of country music broadcasters, Walter Ralph Emery began his career at small-market radio stations in Tennessee before going on to become the most famous TV and radio personality in country music. 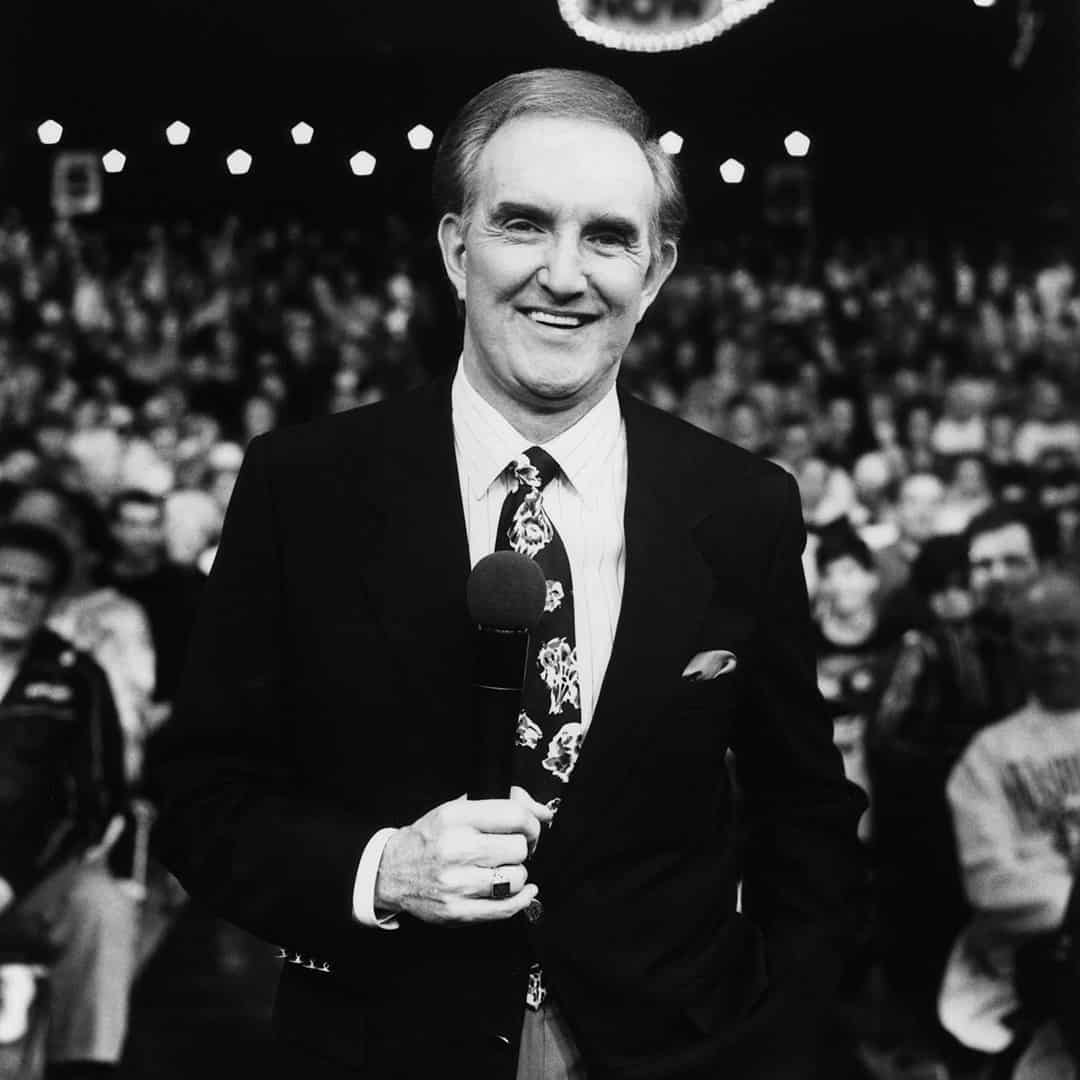 In one industry poll, Emery was voted country radio’s “greatest personality of the century.” He has been called “the Dick Clark of country music” and “the Johnny Carson of cable television.”

Born March 10, 1933, in McEwen, Tennessee, Emery spent happy times on his grandparents’ farm, but he also had to deal with an abusive, alcoholic father, an irresponsible, unloving stepfather, and a mother who descended into a nervous breakdown after years of working at numerous jobs to put food on the table.

The radio provided an escape from his real-life trials. “Radio became my surrogate family,” he wrote. As a teenager he ushered at a movie theater in downtown Nashville, then worked as a stock boy at Kroger. With money he saved, he enrolled in a broadcasting school taught by legendary Nashville radio personality John R (John Richbourg). “I practiced and practiced, in school and at home,” Emery recalled, “talking and listening real hard to myself to rid my speech of its horrendous regionalism.”

Richbourg recommended Emery for his first broadcasting job, at tiny WTPR in Paris, Tennessee, where his first assignment was a fifteen-minute newscast that terrified him. Emery worked briefly at the station, for $39.50 a week in 1951, before moving back to Nashville, where he signed on at WNAH and then at tiny WAGG in nearby Franklin, Tennessee. At WAGG, he interviewed country stars Webb Pierce and Marty Robbins one summer. “I suddenly felt,” he later explained, “that being in radio was unequivocally the right thing for me after all.”

In late 1953 Emery joined the staff of pioneering Nashville radio station WSIX: his first station of more than a thousand watts (five thousand), his first station with network affiliation (ABC), and his first full-time job in radio. Emery’s first television experience came in 1954 at WSIX-TV, as an announcer for live studio wrestling.

Emery worked briefly (less than a month) in 1956 for WLCS in Baton Rouge before returning again to Nashville, this time to work at rock & roll radio station WMAK.

In November 1957, at age twenty-four, Emery started the graveyard shift at Nashville’s fifty-thousand-watt radio station WSM, “the Air Castle of the South.” He plied his trade there as an all-night jock from 1957 to 1972, putting his stamp on the late-night, clear-channel format. Stars and young artists alike, lured by Emery’s open-door policy and the relaxed informal atmosphere in the studio, would drop by to shoot the breeze, drink coffee, and play records. Emery interviewed the biggest names in country music, hosting impromptu jam sessions and live acoustic performances by the likes of Merle Haggard, Loretta Lynn, Willie Nelson, and Marty Robbins. Emery was elected to the Country Music Disc Jockey Hall of Fame in 1989.

Local television producer Elmer Alley heard Emery on the radio (including announcing on the Grand Ole Opry from 1961 to 1964), liked his style, and thought he might work well on television. Emery’s first local show, the early morning Opry Almanac, began in 1963 on WSM-TV and featured Emery in front of a mock sink, as if in a kitchen having coffee and chatting with viewers. Emery moved to afternoons with Sixteenth Avenue, which ran from 1966 to 1969. He then left local television for three years before returning with the highly successful early-morning Ralph Emery Show, which ran from 1972 to 1991. The morning show, which featured a live band, gave early career exposure to young, developing talent such as Lorrie Morgan and the Judds. Emery also hosted the nationally syndicated weekly TV series Pop Goes the Country from 1974 to 1980, and the live weekly show Nashville Alive from 1981 to 1982 on cable superstation WTBS.

Emery was tapped to serve as host of The Nashville Network’s flagship, primetime show, Nashville Now, from 1983 to 1993. The show brought new stars and country legends together for music and talk in a relaxed setting—just as Emery had done on his late-night radio show. Nashville Now raised Emery’s profile nationally, too. He was once voted Favorite Cable Personality in Cable Guide magazine. Longtime Emery friend Barbara Mandrell organized a televised all-star salute to Emery in 1990, during which seventy top country stars paid him tribute.

Emery recounted the story of his life and career and shared stories of the many country stars and celebrities he knew in best-selling volumes beginning with Memories: The Autobiography of Ralph Emery (1991), which spent twenty-five weeks on the New York Times bestseller list. He followed with More Memories (1993), The View from Nashville (1998), and 50 Years Down a Country Road (2000).

In 2007, Emery returned to TV, hosting an interview show, Ralph Emery LIVE, on cable channel RFD-TV. A mammoth collection of his many past interviews, Emery’s Memories, was offered for sale as a set of forty-six audio CDs and two DVDs.

”I’ve always tried to bring respect to country music,” Emery once said. “I’ll be very content if people can look on me and say, ‘He brought dignity to his craft,’ or, ‘He brought class to the business.’” In a career of nearly seventy years, Emery did just that, making him richly deserving of his 2007 election to the Country Music Hall of Fame. –Bob Allen