Merle Travis had an unequaled blend of talents as an innovative guitarist, songwriter, vocalist, guitar designer, and author. 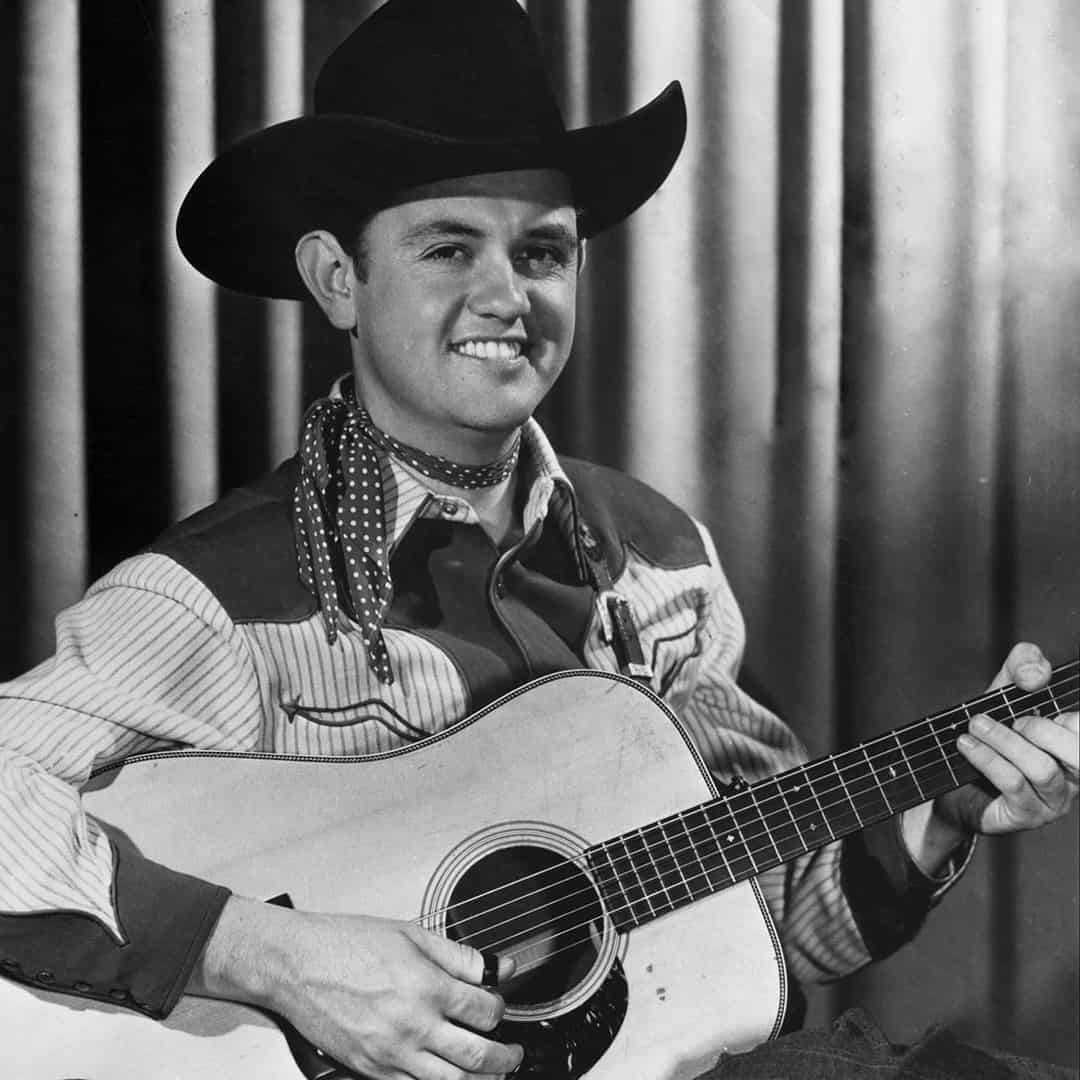 His influence on several generations of performers—from Chet Atkins to Merle’s son, entertainer Thom Bresh, and hitmakers like Marty Stuart—is beyond question.

Merle Robert Travis, son of local farmer Rob Travis and his wife, Etta, grew up in the heart of western Kentucky coal country. When Rob Travis took a job at a nearby mine in 1925, the family moved to a coal company-owned farm near Ebenezer, Kentucky. At age twelve Merle became obsessed with learning Muhlenberg County’s unique guitar finger-picking style, which involved picking syncopated accompaniment on the bass strings with the right thumb while simultaneously playing lead on the treble strings with the index finger. To learn their style, Merle followed coal miners Ike Everly and Mose Rager as the two played local parties and dances.

After graduating from high school and serving in the federally sponsored Civilian Conservation Corps program in 1936, Travis moved to Evansville, Indiana, where he worked with two local bands. In 1937 fiddler Clayton McMichen hired Travis as one of his Georgia Wildcats. Soon Travis joined the Drifting Pioneers, a Chicago-area gospel quartet that moved to WLW radio in Cincinnati, joining the station’s Boone County Jamboree when it began in 1938. Travis remained at WLW after the group dissolved, and worked with the Delmore Brothers and Grandpa Jones. In 1943 Syd Nathan recorded Travis and Jones as “The Sheppard Brothers,” the first artists for his Cincinnati-based King Records.

Travis moved to California in March 1944 and played radio shows and recording sessions. He also recorded solo material, under his own name and pseudonyms, for various small labels. Signed to Capitol as a singer in the spring of 1946, his first single, “Cincinnati Lou,” b/w “No Vacancy,” became his first hit. Following that he reached #1 with “Divorce Me C.O.D.,” which remained at that position for fourteen weeks in 1947. It was one of many songs Travis co-wrote with Cliffie Stone, at the time an assistant A&R man at Capitol. Other song successes included 1947’s “So Round, So Firm, So Fully Packed” (also a #1 hit for fourteen weeks), a vocal version of “Steel Guitar Rag” with lyrics by Travis and Stone, “Three Times Seven,” and “Fat Gal,” and, in early 1948, “Merle’s Boogie Woogie.” Travis’s and Stone’s 1947 composition “Smoke! Smoke! Smoke! (That Cigarette)” became a hit for Tex Williams and Capitol’s first million-seller.

Appreciating the sound of solid-body electric steel guitars, Travis designed an electric Spanish solid-body guitar; in 1948 he had it built by Paul Bigsby, a California patternmaker and steel guitar builder. Now in the collection of the Country Music Hall of Fame and Museum, the guitar may have inspired Travis’s friend Leo Fender to design what was to become the legendary Fender Telecaster electric guitar.

After a brief stay in Richmond, Virginia, in 1949, Travis spent the 1950s in and around California, appearing on local TV, recording, and touring. He landed a cameo role as a guitar-picking soldier in the classic 1953 film From Here to Eternity—starring Montgomery Clift, Burt Lancaster, Frank Sinatra, and Deborah Kerr—and sang “Re-Enlistment Blues,” which was used as the movie’s leitmotif. Then, in 1955, Tennessee Ernie Ford’s recording of an imaginative coal mining tune Travis had written in 1946, “Sixteen Tons,” became a multimillion seller. Travis had recorded this song using acoustic guitar, along with two other folk-flavored originals and a few traditional songs, on the 78-rpm album Folk Songs of the Hills, which had drawn little attention at the time. With Ford, “Sixteen Tons” became an American standard and renewed interest in Travis.

Travis and his third wife, Bettie, moved to Nashville in 1968. In 1973 he joined his friend and musical disciple Chet Atkins to record the LP The Atkins-Travis Traveling Show, which won a Grammy in 1974 for Best Country Instrumental Performance. Inducted into the Country Music Hall of Fame in 1977, Travis spent his later years living in eastern Oklahoma with his fourth wife, Dorothy, ex-wife of Hank Thompson, and often wrote superb memoirs of his career for music magazines. In 1979 he started recording for the Los Angeles-based traditional country label CMH. His 1981 Travis Pickin’ LP received a Grammy nomination. On October 19, 1983, he suffered a massive coronary and died in an Oklahoma hospital the next morning. His ashes were later interred in Ebenezer, Kentucky, under the Merle Travis monument, which had been dedicated in 1956 to honor both him and his success with the song “Sixteen Tons.” –Rich Kienzle