Described by Merle Haggard as “the most unique thing that ever happened to country music,” William Orville “Lefty” Frizzell was certainly one of the most influential performers in country music history. 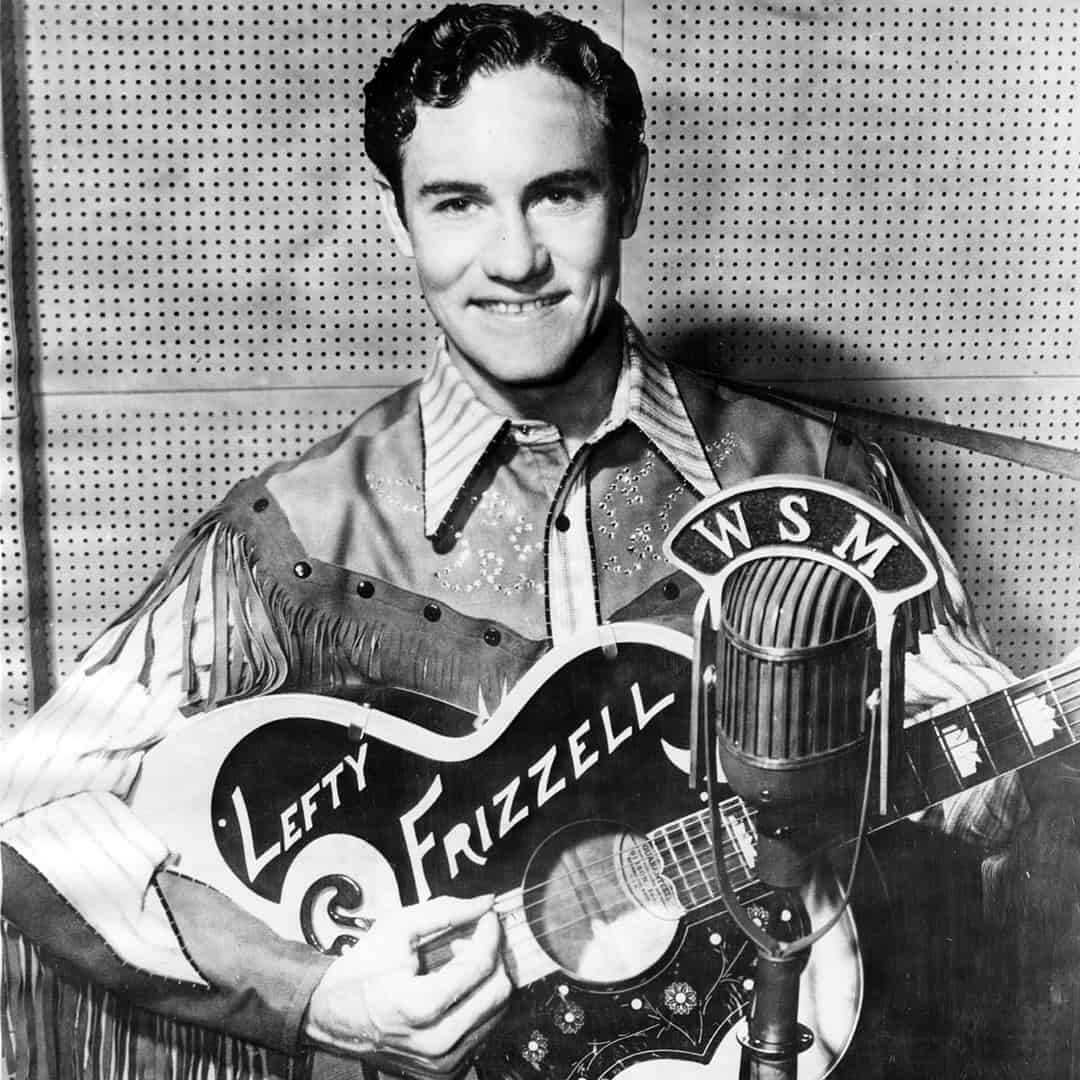 A supreme vocal stylist, he introduced an intimate, vowel-bending style of singing that has been internalized by countless younger stars in the years since Frizzell burst to stardom in 1950. Besides Haggard, such major acts as George Jones, Roy Orbison, George Strait, Keith Whitley, and Randy Travis have all paid him homage.

I Love You a Thousand Ways – Lefty Frizzell

The son of an oil field worker, Frizzell grew up in and around the oil towns of Arkansas, East Texas, and Louisiana. Captivated by the yodel of Jimmie Rodgers, he decided by the time he was twelve years old that he, too, wanted to be a professional singer. His first public performance was during a school program, and it was also at school that he picked up his lifelong nickname by decking a schoolmate with his left hand.

Living in Greenville, Texas, during the war years, Frizzell performed on KPLT in nearby Paris. During that time he met Alice Harper, whom he married in March 1945. After moving to Roswell, New Mexico, in 1946, Frizzell made regular appearances on Roswell’s KGFL and with the house band at the Cactus Garden. But disaster struck in July 1947 when Frizzell was charged with statutory rape. Convicted the following month, he served six months in the county jail, during which time he wrote numerous songs to his wife, including “I Love You a Thousand Ways.”

Several months after his release in 1948, Frizzell traveled to Shreveport, Louisiana, for a failed audition with the Louisiana Hayride. After a time in El Dorado, Arkansas, he returned to southeastern New Mexico, and from there moved to Big Spring, Texas, where he sang at the Ace of Clubs.

In early 1950, while working in Big Spring, Frizzell made a trip to Dallas to “audition” at Jim Beck’s recording studio. Beck showed little interest in Frizzell as a singer but was impressed with one of Frizzell’s original songs, “If You’ve Got the Money I’ve Got the Time,” which was only half-written when Frizzell arrived in Dallas. Beck recorded Frizzell singing a demo of the lively honky-tonk number and took it to Nashville, hoping to interest Columbia executive Don Law in the song as a vehicle for Little Jimmy Dickens. Instead, Law took an immediate interest in Frizzell’s voice. In June 1950, Frizzell signed with Columbia, and his first session for the label was held at the Beck studio the following month. The two songs chosen for the first single were “If You’ve Got the Money I’ve Got the Time” and “I Love You a Thousand Ways.” Released near the end of that summer, both sides of the record eventually hit #1 on the charts.

From that point forward, Frizzell’s star rose with phenomenal speed. The year 1951 saw the release of several of his most memorable records, including the double-sided sensation “Always Late (With Your Kisses)” b/w “Mom and Dad’s Waltz.” Kicked off by Curly Chalker’s ascending steel guitar intro, which leads into Frizzell’s multi-syllabic delivery of the words “always late,” the former hit remains perhaps the definitive example of Frizzell’s revolutionary vocal technique. It spent twelve weeks at #1, and in October 1951 it was one of four songs that Frizzell placed in the Billboard Top Ten simultaneously. In April that year he had toured for a week with Hank Williams, and in July he became a member of the Grand Ole Opry.

However, Frizzell’s life had been in turmoil throughout this period. He drank heavily, and in August 1951 he was arrested backstage at the Opry and charged with contributory delinquency; the charge stemmed from a liaison in Arkansas during his tour with Williams. (Frizzell was never prosecuted.) Frizzell also signed a succession of ill-considered, conflicting contracts, including one in January 1951 that designated Jack Starnes Jr. as his manager. That contract led to a major lawsuit filed by Starnes against Frizzell in June 1952. It was settled out of court a year later.

Frizzell’s extended stay at the top of the charts (thirteen Top Ten hits in roughly two years’ time) was over by 1953, but he remained a popular star on the road. In 1954 he embarked on a grueling three-month tour backed by musicians from the Louisiana Hayride. The tour bankrolled a Frizzell family relocation to Southern California, and they ultimately settled in Northridge. While in California, Frizzell became a regular on the television program Town Hall Party (he had previously made a succession of sell-out appearances on Hometown Jamboree), starred in the first country concert ever held at the Hollywood Bowl (August 6, 1955), and was given a star on the Hollywood Walk of Fame. But without full-time managerial care, Frizzell’s career went into decline. From early 1955 to late 1958 he failed to score a chart hit of any kind. (The rock & roll crisis that so affected the country industry during these years had less to do with Frizzell’s troubles than did his basic lack of career direction.) But as the decade neared a close, Frizzell scored a pair of back-to-back hits with “Cigarettes and Coffee Blues” and his original, classic version of “The Long Black Veil.”

In 1962 the Frizzells moved to Nashville, eventually settling north of the city in Hendersonville. The following year Frizzell recorded the last #1 record of his career, “Saginaw, Michigan.” It topped the charts early in 1964 and was nominated for a Grammy. Then Frizzell’s career again went into decline. His main advocate, producer Don Law, retired from Columbia in 1967, and in 1972 Frizzell was dropped from the label. He was quickly signed by ABC Records, however, and in December that year he recorded the first of his ABC sessions.

By that time, Frizzell had befriended songwriter Sanger D. “Whitey” Shafer, with whom he began co-writing. Their collaborations included “That’s the Way Love Goes” and “I Never Go Around Mirrors,” two of the most well-known songs in Frizzell’s catalog. (The former was a #1 hit for Johnny Rodriguez in 1973–74 and for Merle Haggard in 1984.) Frizzell’s own versions of the two songs appeared on his 1973 ABC album The Legendary Lefty Frizzell, which was followed a year later by The Classic Style of Lefty Frizzell. Though applauded by critics in the years since, the two albums went largely unnoticed when released.

By early 1975, Frizzell was telling friends and family that he wanted to get off the road and concentrate on songwriting. His pet project was a gospel album for which he and his songwriter friends would write new material. The project never came to pass.

A heavy drinker all his adult life, Frizzell also suffered from high blood pressure. In the early hours of July 19, 1975, he was felled by a stroke. He died that night. In 1982, Frizzell’s and achievements were honored when he was elected to the Country Music Hall of Fame. – Daniel Cooper