Few country music artists can claim a longevity and track record to equal that of Hank Thompson. 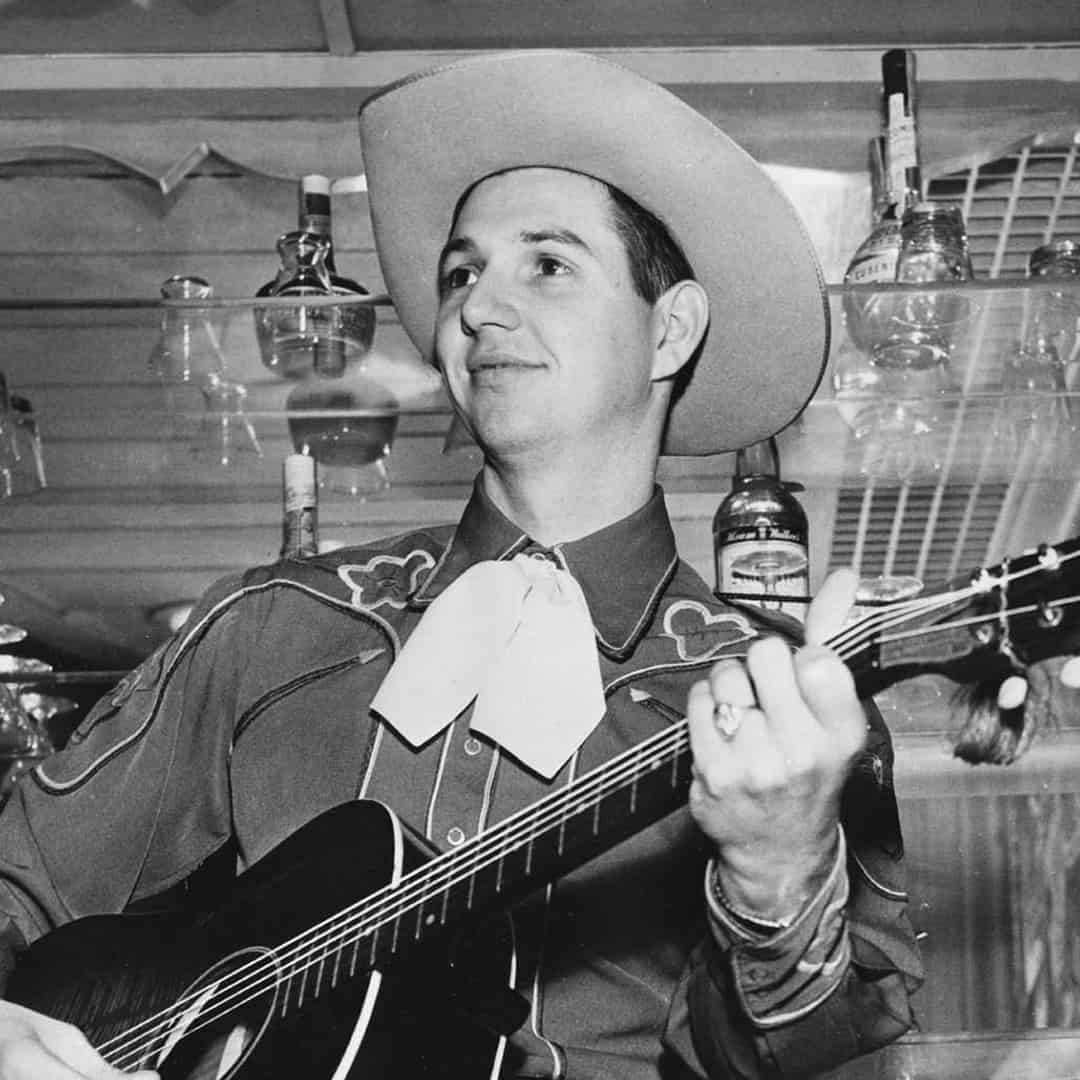 Between 1948 and 1974 he scored no less than twenty-nine Top Ten hits, with another nineteen in the Top Twenty, and continued to chart into the 1980s.

The Wild Side of Life – Hank Thompson

Many of these, including “Green Light,” “Whoa Sailor,” and “Waiting in the Lobby of Your Heart,” he penned himself, thus proving his stature in country music’s great singer-songwriter tradition. Along the way Thompson forged a potent blend of honky-tonk and western swing that has long served as a source of continuity amid country’s experimentation with rock and pop sounds.

Like many country stars, Henry William Thompson took an early interest in music, winning several amateur contests on the harmonica. After he became enthralled by cowboy movie idol Gene Autry, however, the guitar became Thompson’s instrument of choice. With a Christmas present from his parents, a four-dollar guitar bought at a secondhand store, young Hank was on his way. By the time he finished high school he was broadcasting over radio station WACO as “Hank the Hired Hand,” sponsored by a local flour company.

After graduating, Thompson enlisted in the U.S. Navy. While stationed in San Diego, he persuaded his superiors to let him play area clubs, and after putting out to sea, he entertained his shipmates as well. He kept on broadcasting, too, over a network of small stations organized by American military personnel in the South Pacific. While in the Navy he also took advantage of training programs and studied electrical engineering at Southern Methodist University, the University of Texas, and Princeton University—making him one of country music’s better-educated stars.

Although he pondered an engineering career after his military stint was over, radio work and his first hit record, “Whoa Sailor,” kept him on a show business track. Assisted by prominent DJ Hal Horton of the 50,000-watt KRLD in Dallas, this Globe Records release became a minor regional success. Thompson also recorded four sides with the Blue Bonnet label before Tex Ritter, then a prominent star on Capitol Records, helped him gain a contract with this larger, major label. During 1948–49 Thompson justified Ritter’s faith in him with hits such as “Humpty Dumpty Heart” (based on the children’s nursery rhyme), “Green Light,” and a remake of “Whoa, Sailor.”

During the 1950s Thompson’s songwriting talents, gravelly baritone, precise diction, and powerful combination of western swing and honky-tonk sounds helped him continue his string of hits. The year 1952 brought his first #1 disc, “The Wild Side of Life,” a song that inspired the hit that launched Kitty Wells’s career: “It Wasn’t God Who Made Honky-Tonk Angels.” Subsequent Thompson chartmakers of the 1950s included “Waiting in the Lobby of Your Heart,” “Rub-A-Dub-Dub,” “Yesterday’s Girl,” “Wake Up, Irene,” “Honky Tonk Girl,” “Most of All,” “The Blackboard of My Heart,” and “Squaws Along the Yukon,” all in the Top Ten.

During these years Thompson also made inroads into television, hosting a variety show on WKY-TV in Oklahoma City from 1954 to 1957. In addition, he was one of the earliest country performers to entertain in Las Vegas showrooms, and he recorded one of country’s first live albums, Live at the Golden Nugget, there in 1960. Meanwhile, he brought his engineering knowledge to bear on his stage show and built top-flight sound and lighting systems that heightened his drawing power at the more than 250 show dates he typically played each year. Thanks to his musical and technical leadership, his Brazos Valley Boys were Billboard’s top-ranked band from 1953 to 1965, a record that has yet to be equaled.

Into the 1960s and beyond, Thompson’s easy manner made him a welcome guest on network TV variety shows, as did a dynamic stage presence magnified by his size (he stood six feet, two inches tall); a rough-hewn, handsome appearance; and custom-made western outfits for which he became famous. But following “A Six Pack to Go” (#10, 1960) and “Oklahoma Hills” (#7,1961), he didn’t make the Top Ten again until 1968’s “On Tap, in the Can, or in the Bottle” and “Smoky the Bar,” both recorded early in his association with Dot Records, which he began after a brief stay at Warner Bros. in the late 1960s. Two more Top Ten hits came in 1974, but the 1970s belonged to country-pop, and Thompson’s chart success dwindled to the point where he pared down his road schedule and spent more time hunting or tending to his various real-estate, broadcasting, and music publishing interests.

In the 1980s, however, as harder-edged sounds enjoyed renewed popularity, Thompson hit the road again in earnest, playing dates in Europe, Africa, Asia, and South America as well as in the United States. He also kept recording, and he signed with Nashville’s Step One Records in 1987. In 1997 Curb Records released Hank Thompson and Friends, a critically acclaimed collection of duets pairing Thompson with Lyle Lovett, Vince Gill, George Jones, Kitty Wells, and others. Thompson’s 2000 HighTone Records album, Seven Decades, featured his sure handling of both new material and classic country songs he’d never recorded before. Thompson’s hard-core honky-tonk and western swing sound—marked by a strong rhythm section of piano, bass, guitar, and drums; lead and fill parts supplied by twin fiddles, electric guitar, and steel; frequent shifts from 2/4 to 4/4 time, and above all his powerful vocals—continues to influence country artists such as George Strait, Dwight Yoakam, and Asleep at the Wheel. Hank Thompson was elected to the Country Music Hall of Fame in 1989 and to the Nashville Songwriters Hall of Fame in 1997. He succumbed to lung cancer on November 6, 2007, at his home in Keller, Texas.    –John Rumble