Rightfully given credit as the founder of WSM’s Grand Ole Opry, George Dewey Hay was a remarkable visionary and colorful romantic who played a vital role in the commercializing and promotion of country music. 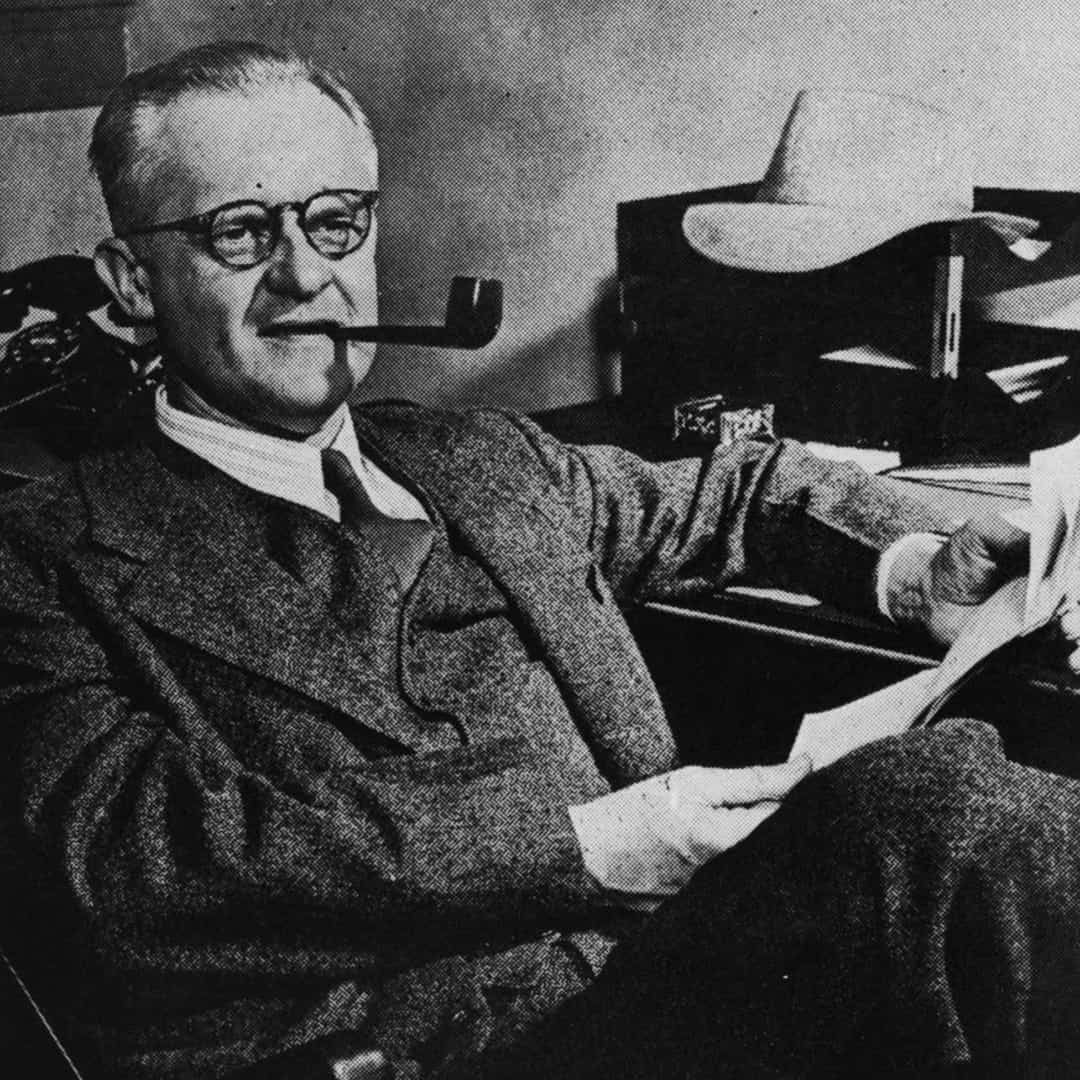 Following service in the Army, the Indiana native made his way to Memphis, where he worked as a reporter for the Commercial Appeal. One of his assignments was to cover the city court beat, from which he developed a popular humorous column called “Howdy, Judge,” based on the dialogue between the judge and those charged with petty crimes.

The success of these columns (which were collected in book form in 1926) won him the sobriquet “The Solemn Ole Judge,” though he was only in his twenties and had no legal training. When the newspaper established its own radio station, WMC, in January 1923, Hay was soon prevailed upon to serve as late-night station announcer and radio editor.

Hay found he had a flair for this kind of work and brought a sense of showmanship and style to it. He chanted the call letters, scripted his shows, and blew an imitation steamboat whistle (dubbed “Hushpuckena”) to announce the start of the evening’s shows. (All of these he would later bring with him to WSM.) His popularity grew so fast that in May 1924 he was hired to work at WLS in Chicago, where, among other duties, he announced for the show that would eventually become the National Barn Dance.

In the fall of 1924 Hay won the Radio Digest poll as the most popular announcer in the country. This led to his being offered the job as “radio director” for the newly opened WSM in Nashville; he accepted, and on November 9, 1925, began work at the station. Hay told a friend shortly after arriving that he wanted to recreate the kind of barn dance he had worked on at WLS. He was happy to see that performers like Dr. Humphrey Bate and Uncle Dave Macon had already made occasional appearances on WSM.

In late November 1925, Hay invited a seventy-eight-year-old fiddler from Laguardo, Tennessee, Uncle Jimmy Thompson, to come up and play at his microphones. Hay later wrote that he was astounded at the calls and telegrams that poured in. Hay announced in late December 1925 that due to the audience interest, WSM would feature “an hour or two” of old-time tunes every Saturday night.

Hay bombarded the local newspapers with a steady stream of press releases in which he trumpeted the values of this kind of down-to-earth “folk music.” He soon began to augment this image by coming up with colorful names for his bands (Dr. Bate’s Augmented String Orchestra became the Possum Hunters, for instance), and by encouraging the musicians to dress in overalls and straw hats. He also helped set up a booking agency, and by 1933 some of the bands were so well known across the country that they were able to tour theaters as far away as Iowa. It was Hay, too, who redubbed the program the Grand Ole Opry in 1927.

Though Hay was the show’s figurehead, publicist, and announcer, he began to lose power with the station in the 1930s. Hay lacked managerial skills, and the station’s owners began to bring in a series of professional managers who took over many of Hay’s duties. To compound problems, Hay suffered a nervous breakdown in the late 1930s, causing him to take sick leaves as long as eighteen months. (During part of this time he worked with a National Life-produced magazine called Rural Radio, one of the first periodicals covering country music.) By the spring of 1938, however, he was back at work and playing important roles in two key Opry developments, the show’s half-hour contribution to the NBC network, beginning in 1939, and the 1940 Hollywood film Grand Ole Opry with Hay, Roy Acuff, Uncle Dave Macon, and the top-billed Weaver Brothers & Elviry.

Throughout the 1940s, Hay remained as a major announcer with the show, often touring with Opry troupes around the country. In September 1947 he made one of his last appearances with an Opry show group at New York City’s Carnegie Hall. In 1945 he wrote a fascinating little book called A Story of the Grand Ole Opry, and in 1953 became an editor of an important early country music newspaper, the Nashville-based Pickin’ and Singin’ News. In the 1960s he attempted two syndicated radio shows that were devoted to reminiscing about the Opry. Upset at the direction of the Opry, and its virtual neglect of him, he had actually left Nashville by the end of the 1950s and settled in Virginia Beach, Virginia, where he died in 1968.  Hay is buried in Forest Lawn Cemetery in Norfolk, Virginia. — Charles Wolfe