While he was unquestionably the best-selling C&W artist from the early days of the Depression through the close of World War II, Gene Autry was also much more. 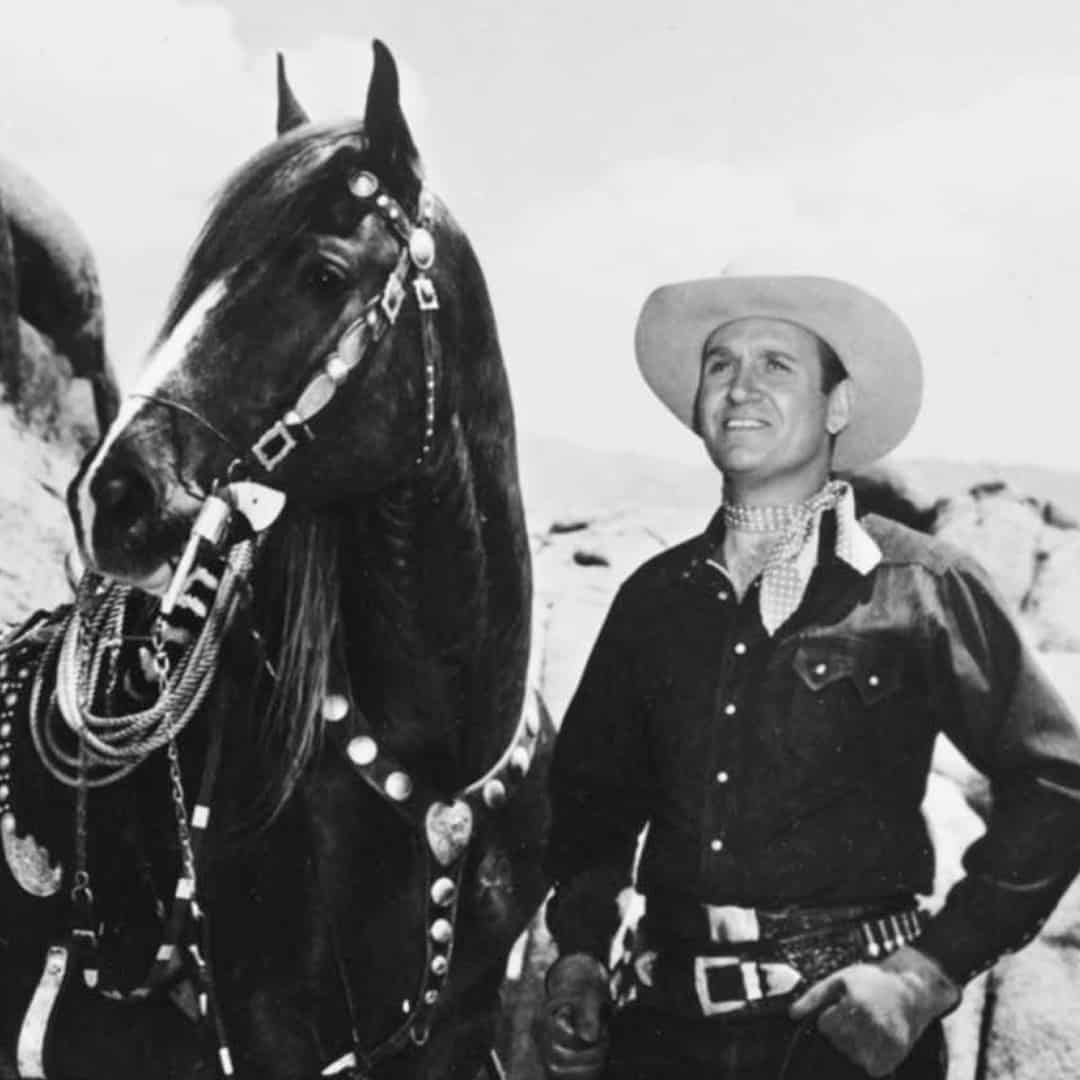 Autry’s status as a top box-office attraction in motion pictures brought his music to the attention of a vast audience otherwise unfamiliar with country music. In addition, his success as a singing cowboy launched an entire genre of movies and paved the way for successful rivals such as Roy Rogers and Tex Ritter.

Orvon Gene Autry, grandson of a Baptist minister, was born in a farmhouse near Tioga, Texas, to Delbert and Elnora Autry. He first performed as a boy soprano in his grandfather’s church choir. Subsequently he mastered a $12 Sears mail-order guitar, which he used to accompany his singing at local events. When the Autrys moved to Oklahoma, young Gene took a job as relief telegrapher for the St. Louis & Frisco railroad, where he eventually met Jimmy Long, an older fellow-railroader who also made music on the side and had ideas about cutting records. Inspired by Long (and possibly by a chance, encouraging encounter with humorist Will Rogers), nineteen-year-old Autry took a leave of absence from his job to make the rounds of New York City record companies, auditioning with his versions of contemporary Gene Austin and Al Jolson hits.

Befriended by fellow Oklahomans Johnny and Frankie Marvin, then pop singers recording in New York, Gene made test records for Edison and Victor before being urged to return home and gain experience as a performer. He spent two years (1928–29) on Tulsa’s KVOO, billed as “Oklahoma’s Yodeling Cowboy” and singing Jimmie Rodgers’s then-current hits before returning to New York in October 1929, just days before the market crashed. He began recording with a vengeance, cutting masters for five different companies, each of which issued records on several labels for chain-store distribution. For two years he recorded prolifically, covering Rodgers’s hits and performing other songs in that style. Ironically, stardom came the first time he broke away from the Rodgers mold, recording “That Silver-Haired Daddy of Mine” in late October 1931 as a duet with Jimmy Long for the ARC family of labels and its A&R man Art Satherley. Lilting and sentimental in the tradition of the turn-of-the-century parlor ballad, the song became a major hit and propelled Autry to a radio career on Chicago’s WLS, beginning with his first morning broadcast on December 1, 1931, on his own show Conqueror Record Time. Urged by Satherley, Autry focused on western songs and attire, and recorded his first western songs in 1933. In addition, WLS announcer Anne Williams created skillful word-pictures building Autry’s cowboy image, which was reinforced by his hit recordings of “The Last Roundup” and “Cowboy’s Heaven.”

In the summer of 1934, Gene and his wife, Ina (Jimmy Long’s niece), and his friend Lester “Smiley” Burnette, musician-composer-comedian with the Autry radio troupe, drove to California, where the singing cowboy was to make a guest appearance in the Republic Pictures western movie, In Old Santa Fe. His own series of films began the following year (with the science fiction serial The Phantom Empire), and by 1937 exhibitors voted Autry the #1 box-office attraction in westerns.

Fueled by his popular films, hit records such as “Tumbling Tumbleweeds,” “Mexicali Rose,” “Take Me Back to My Boots and Saddle,” “Gold Mine in the Sky,” “South of the Border (Down Mexico Way),” “Back in the Saddle Again,” and “Be Honest with Me” abounded. His smooth, relaxed baritone voice extended his appeal to devotees of mainstream pop music, while the down-home warmth of his delivery assured the country audience he never ceased to be one of them. The virtual antithesis of many of today’s vocalists, he adhered to the melody line with a total absence of vocal gymnastics or bluesy embellishments, with his clear, straightforward delivery evoking both sincerity and serenity.

Autry’s screen presence, as gentle and reassuring as his singing style, offered comfort and inspiration to a Depression-weary audience. Invariably cast as himself—that is, Gene Autry—a good-natured and unassuming country singer, he was no swaggering superhero, but rather a guileless young man who triumphed over all odds by virtue of his innate goodness. Charismatic and handsome astride his horse, Champion, Autry filled his movies with humor (Smiley Burnette was his usual comic sidekick), music, and a minimum of gunplay. In 1940 he was voted the fourth most popular Hollywood star, out-polling Tyrone Power and James Cagney.

Wrigley sponsored the Autry CBS radio series, Melody Ranch, from 1940 through 1956, interrupted only during Autry’s service in the Army Air Corps during World War II (he joined voluntarily on July 26, 1942, during a Melody Ranch broadcast and served as a transport plane pilot in the Pacific Theater for three years). The postwar years brought more million-selling records, including “Here Comes Santa Claus” (1947), “Rudolph, the Red-Nosed Reindeer” (1949), “Peter Cottontail,” and “Frosty the Snow Man” (both 1950). Autry produced his own feature films from 1947 through 1953 and, shrewdly judging the importance of the new medium of television, became the first major star to appear in his own filmed TV series. The Gene Autry Show, produced by Autry’s Flying A Productions, was sponsored on CBS-TV by Wrigley from July 23, 1950, through August 7, 1956.

Fulfilling a lifelong fantasy, Autry became owner of the Los Angeles Angels baseball team in December 1960. Although he continued to perform sporadically during the next five years, he left the arena before country singers’ personal appearances were termed “concerts” and before it became commonplace to attribute artistic genius to country or rock artists. Lavish praise for his talent and his impact on our popular culture has been slow in coming, but even after his death, on October 2, 1998, he continues to be idolized by generations, including many younger country singers who patterned their lives after his and cheered his 1969 induction into the Country Music Hall of Fame.  –Jonathan Guyot Smith