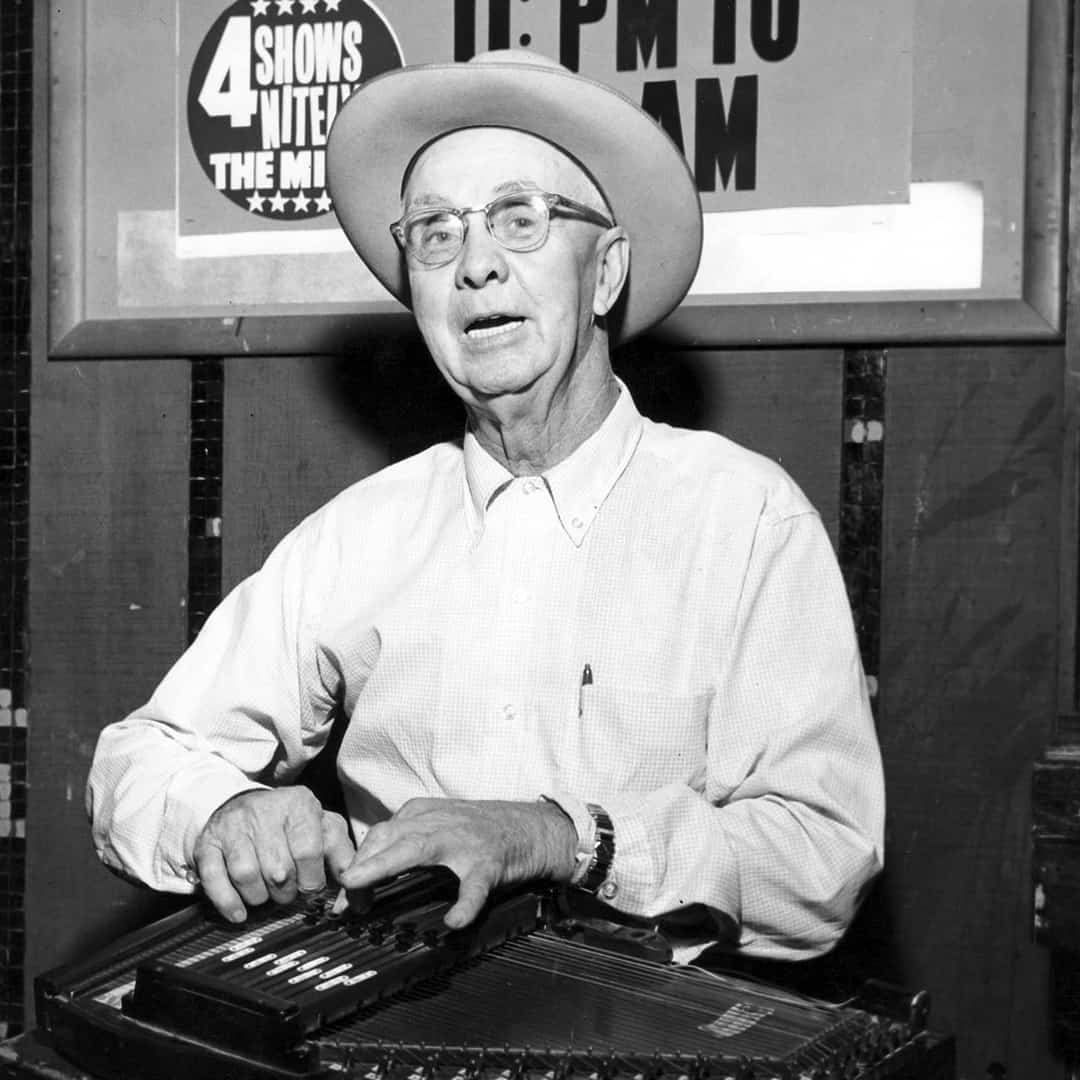 Convinced he could play and sing better than other musicians who preceded him on disc, he journeyed to New York in 1924 to record for OKeh Records. Early in 1925 he recorded his hit rendition of “The Titanic,” a song memorializing the sensational 1912 ocean disaster.

This became Stoneman’s breakthrough number, and other sessions for OKeh soon followed. Accompanied by his own autoharp, harmonica, and guitar, the multi-instrumentalist and vocalist recorded traditional songs (“John Hardy”), sentimental numbers (“The Dying Girl’s Farewell”), and event songs (“Wreck on the C&O”).

Early on, Stoneman recorded solo for the Edison label as the Blue Ridge Mountaineer, a name befitting his birth near the mountain community of Monarat, Virginia, on May 25, 1893. By August 1926 he began to enlist neighbors and kin in various combinations. His wife, Hattie; Kahle Brewer; and Eck Dunford played fiddle. Ernest’s cousin George Stoneman played banjo, and Hattie’s siblings Bolen and Irma Frost played banjo and organ, respectively. Hattie Stoneman, Brewer, and Walter Mooney, among others, also assisted Ernest on vocals. For the Edison, Gennett, OKeh, and Victor labels, Pop recorded solo and, with his musical cohorts, as Ernest V. Stoneman & His Dixie Mountaineers, amassing an extensive repertoire of sacred songs (“The Great Reaping Day”), tragic numbers (“The Fatal Wedding”), sentimental pieces (“Two Little Orphans”), and traditional tunes (“Old Joe Clark”). As Ernest Stoneman & the Blue Ridge Corn Shuckers, they also preserved rural comedy skits such as “Old Time Corn Shuckin’” and “Possum Trot School Exhibition.” In addition to recordings issued under his own name, Stoneman also appeared on early recordings by other artists, among them Uncle Eck Dunford, Frank Jenkins’ Pilot Mountaineers, and the Sweet Brothers.

Strong sales of Stoneman’s recordings encouraged Victor Records producer Ralph Peer to set dates in Bristol, Tennessee, in 1927 to record Stoneman and other artists Stoneman recruited. The Carter Family and Jimmie Rodgers made their first recordings during those landmark sessions.

Stoneman prospered in the late 1920s as his recording income surpassed his earnings as a carpenter. During these flush times, he purchased home appliances to lighten the workload shared by his wife and daughters, and generously loaned money to friends. But when the Great Depression set in, many of these loans went unpaid, and his record sales fell dramatically. In fact, Stoneman did not record between December 1928 and December 1933, and only six of the eighteen sides he made in 1934 were issued. His sessions of January 10, 1934, marked the end of his pre-war recording career.

In 1932, Ernest and Hattie Stoneman had moved with their children to the Washington, D.C., area, where Ernest found intermittent carpentry work. As the Depression wore on and their family grew, the Stonemans knew poverty first-hand. At times they were forced to seek shelter in leaky, dilapidated houses, and more than once the children went to school hungry.

Prospects brightened with the improving economy of the World War II years, and after the conflict Pop began organizing a band featuring a number of his children, who eventually coalesced as the Stoneman Family. Various Stoneman siblings were working together in local clubs by the late 1940s, but this act evolved directly from the Blue Grass Champs, a group showcasing Scott Stoneman’s virtuoso fiddling, Donna’s mandolin playing, Jim’s bass work, and the talents of non-family members.

By 1961 the Stoneman Family act included Scott, Donna, Jim, brother Van on guitar, sister Veronica (Roni) on banjo, and Pop as featured singer and autoharpist. The group made two albums for Starday Records in 1962 and 1963, later recording for MGM and World-Pacific. Pop also joined his children for appearances at folk festivals and folk clubs. With the advent of the lively syndicated TV series Those Stonemans in 1966, Pop proved his skills on the small screen. He died on June 14, 1968, having lived to see the Stoneman Family win the Country Music Association 1967 Vocal Group of the Year Award. Hattie Stoneman, who died on July 22, 1976, also witnessed this triumph.

Following his death, the children of Pop and Hattie Stoneman extended their family’s musical heritage into the twenty-first century. A fine vocalist and autoharp player, Patsy replaced her father in the act, which went on to record for other labels including RCA and CMH. Roni and Donna left early in the 1970s, and Scott died in 1971, but Patsy, Jimmy, and Van pressed on with assistance from non-family sidemen. Donna eventually returned, and Roni worked with them from time to time, in addition to starring on the popular Hee Haw TV series as banjo player and comedienne. By 1993, however, Jim and Van’s health problems effectively ended the band’s career. Although both brothers have passed away, Patsy and Roni continued to make occasional appearances until Patsy’s death in 2015), and Donna lends her talents to evangelistic work. Meanwhile, reissues of Pop’s classic 1920s recordings make his music available to new generations.

Election to the Country Music Hall of Fame in 2008 was a fitting honor for this remarkable musician.  –Ivan Tribe