One of the first of the great brother duos of the 1930s, the Delmore Brothers were perhaps the most musically sophisticated, most creative, and most technically proficient of all the duo acts. 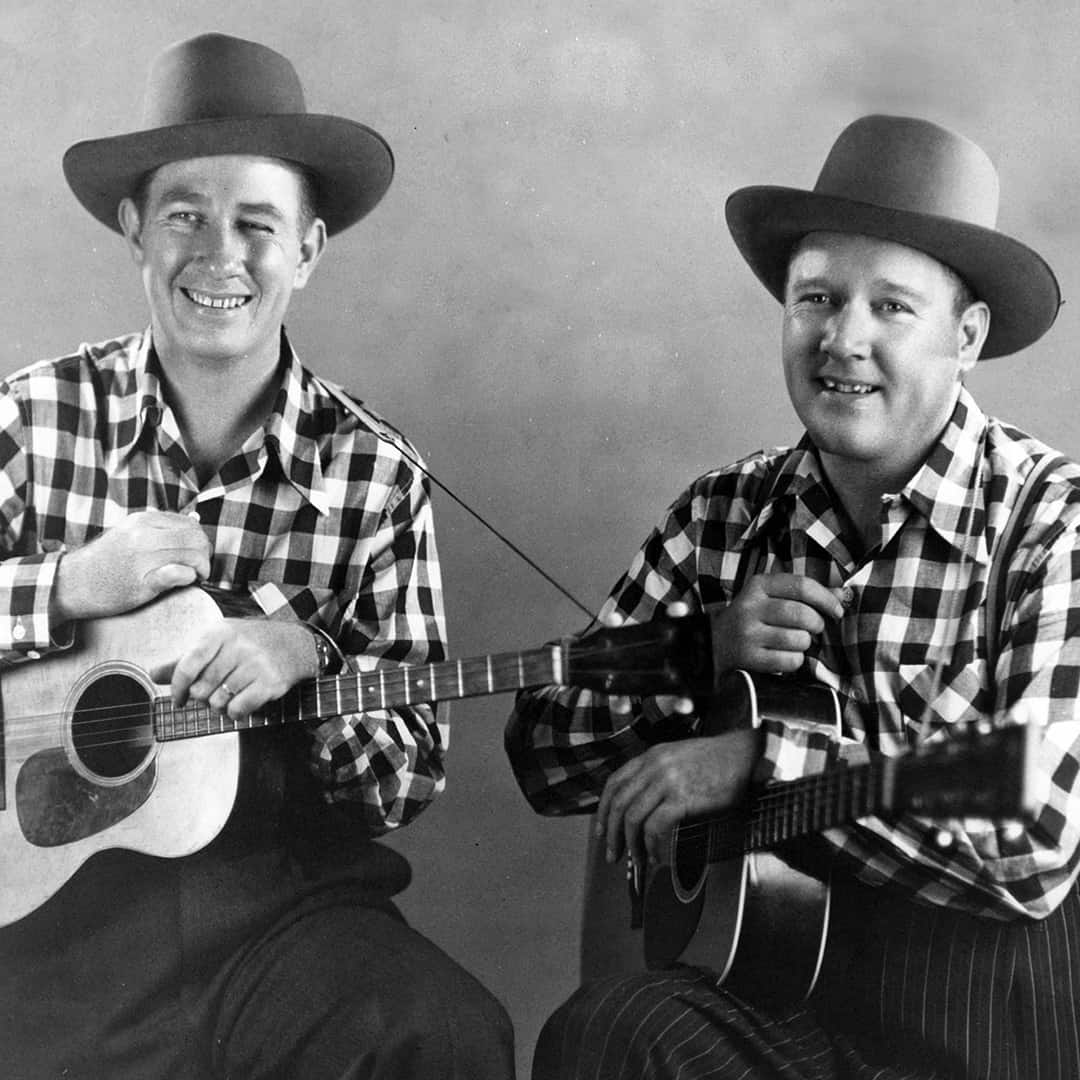 Their soft, pliant harmony, dazzling guitar work, love of blues, and well-crafted songs endeared them to generations of fans. And though their hit songs such as “Brown’s Ferry Blues,” “Gonna Lay Down My Old Guitar,” and “Blues Stay Away from Me” became country standards that are still heard today, the Delmores never seemed able to grab the golden ring that would have won them fame and fortune.

Hailing from the red clay hills of northern Alabama, the brothers grew up in a gospel music tradition of shaped-note songbooks and singing schools; their mother, Mollie, was a composer of such songs, and some of Alton’s first efforts were gospel numbers co-written with her. The brothers soon developed a style based around the new microphone and radio technology (that let their soft voices be heard), and won their reputation by singing at local fiddling contests. After an early record for Columbia in 1931 (“Got the Kansas City Blues”), they won a job on the Grand Ole Opry in 1933. That same year they began a long-term relationship with Victor’s new budget label, Bluebird, and Alton began focusing on writing new songs. They soon began attracting buckets of mail, and by 1936 the Opry reported that they were the most popular act on the show.

For several years they toured and recorded with fellow Opry star Uncle Dave Macon, and in 1936 they teamed with Fiddlin’ Arthur Smith. With Smith they recorded classic tunes like “There’s More Pretty Girls than One” and “Beautiful Brown Eyes.” On their own, they recorded pieces like “Southern Moon,” “When It’s Time for the Whippoorwill to Sing,” and “Fifteen Miles to Birmingham.”

Disagreements with the Opry management over bookings led the brothers to leave the show by 1939; it proved to be a mistake, and while their records continued to do well (they switched to Decca in 1940), they had a hard time finding a new radio base. The next few years saw them moving restlessly to several cities including Raleigh, North Carolina, and Birmingham, until temporarily landing at WLW, the powerhouse station in Cincinnati.

Here they resurrected their career. In 1943 Alton organized the gospel quartet Brown’s Ferry Four with Merle Travis and Grandpa Jones; it became country’ s first really successful gospel quartet, excelling on radio and on records. They signed with the local independent label King, and began mixing blues and boogie with their songs. Often working with harmonica ace Wayne Raney, they produced pieces like “Hillbilly Boogie,” “Freight Train Boogie,” and “Blues Stay Away from Me.” Here too, though, they seemed unable to capitalize on their new hit records. During the late 1940s they were on the move again: to Memphis; then to Chattanooga; to Jackson, Mississippi; to Athens, Alabama; then to Covington, Kentucky; to Ft. Smith, Arkansas; to Del Rio, Texas; and finally to Houston. Here they broke up the act; Alton wanted to try his hand at full-time songwriting (he had been responsible for most of the original songs they did), and Rabon found he had lung cancer. An operation was of little help, and in 1952 Rabon died.

Alton continued to record with independent labels, but eventually dropped out of music, bitter and disillusioned. He got some satisfaction out of seeing some of the one thousand songs he wrote recorded by a wide variety of modern artists, and he was able to complete most of a remarkable autobiography that was published posthumously as Truth Is Stranger than Publicity.  –Charles K. Wolfe