Rarities include the only remaining radio transcription disk of the first network radio broadcast of the Grand Ole Opry from 1939. This disc is one of the first fifty recordings selected by the National Recording Registry of the Library of Congress as culturally, historically, or aesthetically significant. 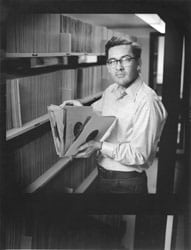 In April 2004, the Museum's recorded sound collection was named in memory of record collector, historian, and longtime staff member, Bob Pinson. Pinson, who passed away in 2003 at age sixty-nine, is responsible for amassing the recordings that form the core of the Museum's collection.

Pursuing a lifelong passion for roots music, Texas native Pinson began collecting records in the 1940s and assembled a collection of 15,000 early country music recordings, including many rare discs that otherwise might have been absent from the historical record. In 1971, he urged the Museum to include historic recordings in its then-small collection and offered his collection for purchase.

"By making his collection available to us, Bob ensured that the Museum could take its place among the nation's major cultural institutions," said CEO Kyle Young.

In May 1973, Pinson followed his collection to Nashville and began working as the Museum's director of record acquisitions. During the next quarter century, he built the nearly 200,000-disc collection that is now part of the Museum's Frist Library and Archive.

Pinson accomplished this without an annual appropriation for record acquisitions. Instead, he generated funds by securing donations, selling duplicate copies, and arranging mutually beneficial trades with other institutions like the Library of Congress.

He also worked on numerous historic record reissue projects, including: The Bristol Sessions, which documents the first recordings of the Carter Family and Jimmie Rodgers; From Where I Stand: The Black Experience in Country Music; and The Complete Hank Williams.

Pinson retired as a full-time staff member in 1999 but continued his work at the Museum part time. He served as editorial researcher on the landmark volume Country Music Records: A Discography, 1921-1942 by Tony Russell.