Pee Wee King was an unlikely candidate for country music stardom. Yet as a songwriter, bandleader, recording artist, and television entertainer, he broke new ground in country music, and he helped to bring waltzes, polkas, and cowboy songs into mainstream country music during ten productive years at the Grand Ole Opry. 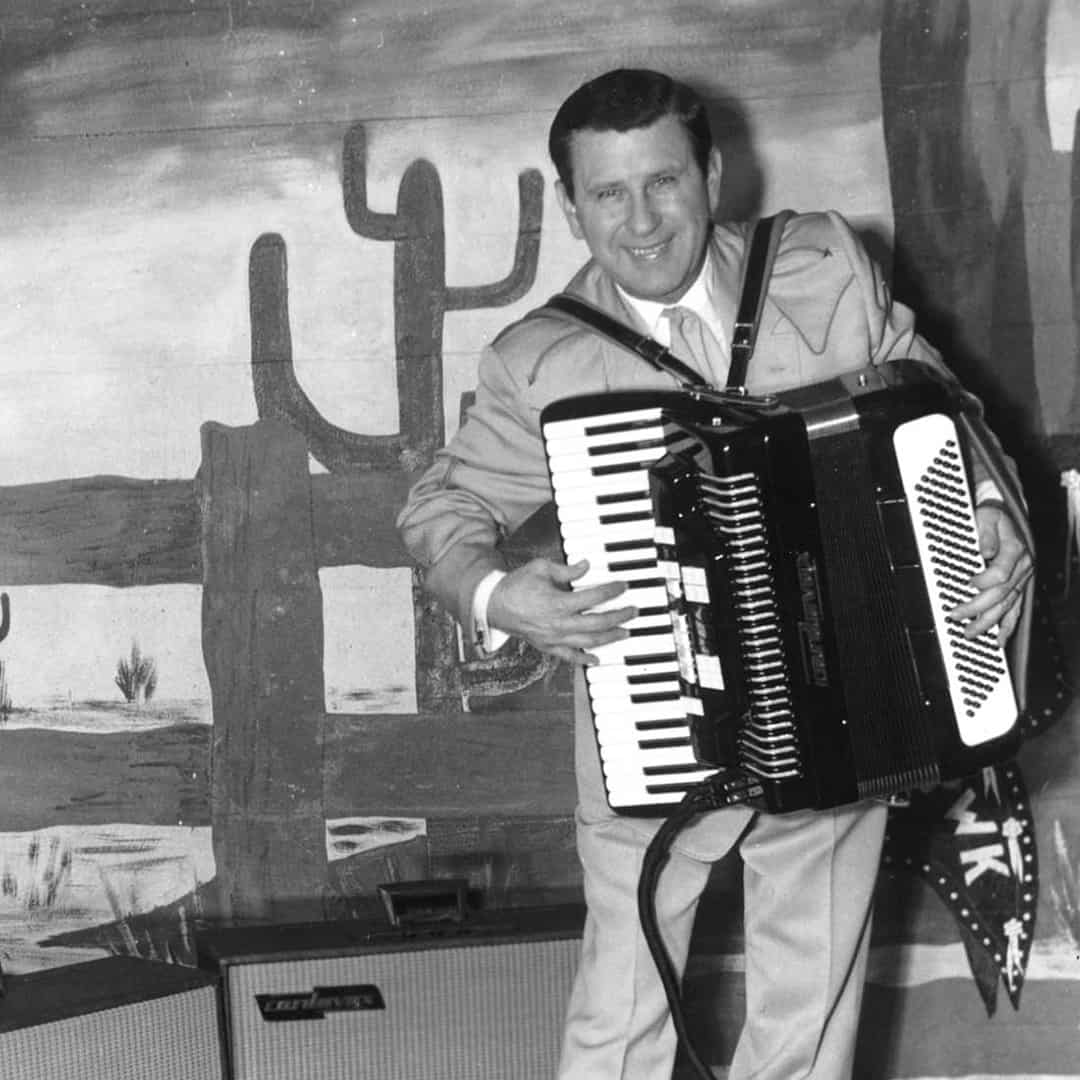 Born Julius Frank Anthony Kuczynski into a working-class Polish-German family, he grew up in the polka-and-waltz culture of Wisconsin. His musical debut occurred at age fifteen, when he played the accordion in his father’s polka band.

He changed his name to King (after the then-popular polka performer Wayne King) and formed his own high school band, Frankie King & the King’s Jesters. In 1933 young Frankie King joined the Badger State Barn Dance and soon had his own radio show on WJRN in Racine.

King’s lucky break came in the spring of 1934, when he met promoter J. L. Frank. He moved with Frank to Louisville in 1934 to back up Gene Autry for a time, joined Frankie More’s Log Cabin Boys as accordionist on WHAS radio, and in 1936 married Frank’s stepdaughter Lydia.

In 1936 King was in Knoxville performing on WNOX. In 1937 he formed the Golden West Cowboys and moved to Nashville to begin a ten-year run on WSM’s Grand Ole Opry, with the exception of 1940, when he worked primarily out of Louisville. In 1941–42 he and his band were featured with the Camel Caravan, a WSM touring company that presented some 175 shows at military installations in the United States and Central America. At various times his band included Eddy Arnold, Redd Stewart, Ernest Tubb, Cowboy Copas, and Minnie Pearl.

After joining the Grand Ole Opry in June 1937, King helped introduce an array of new instruments and sounds to that program’s stage, including the trumpet, drums, and the electric guitar. In addition, he dressed his band members in spiffy western outfits designed by Hollywood tailor Nudie Cohn. His nattily attired Golden West Cowboys generally produced a smooth and danceable sound during their heyday in the 1940s; in the 1950s they even branched out briefly into mild rockabilly.

King wrote or co-wrote more than four hundred songs, including some of the most popular songs in American musical history, notably “Slow Poke” (a #1 pop hit for fourteen weeks in 1951) with Chilton Price and the hugely successful “Tennessee Waltz” with Redd Stewart. Patti Page’s 1950 version of the latter song went to #1 on the pop charts and, within six months, sold almost five million copies. It became an official Tennessee state song in 1965. King’s own recording career included more than twenty albums and 157 singles, most of them issued during his seventeen-year association with RCA Victor. With the release of his recording of “Slow Poke” in 1951, he became one of the first country musicians to cross over successfully into the pop field, following precedents set by Elton Britt, Eddy Arnold, and Red Foley.

King became also a pioneer television performer when, in 1947, he returned to Louisville to work on WAVE radio and television. In the fifties and sixties he had regional and national TV shows originating from Louisville, Cincinnati, Cleveland, and Chicago, including a six-year run of The Pee Wee King Show on ABC television.

King appeared in four popular movies: Gold Mine in the Sky with Gene Autry in 1938; Flame of the West with Johnny Mack Brown in 1945; and Ridin’ the Outlaw Trail (1951) and The Rough, Tough West (1952) with Charles Starrett.

In 1970, King was inducted into the Nashville Songwriters Hall of Fame, and in 1974, he was elected to the Country Music Hall of Fame. – Wade Hall