The most popular female country singer in recording history, Patsy Cline has achieved iconic status since her tragic early death at age thirty in 1963. 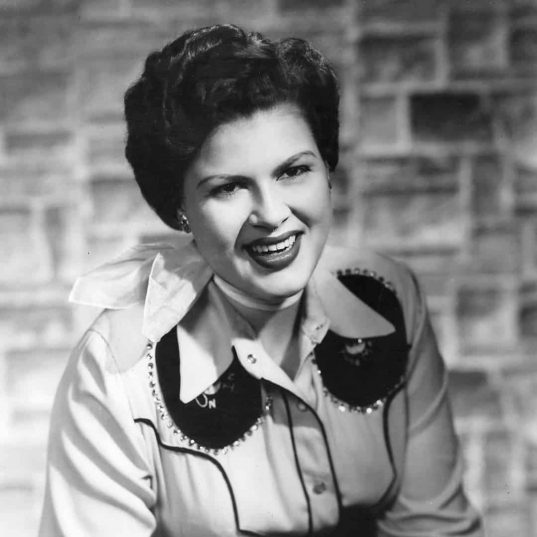 Cline is frequently invoked as a standard for female vocalists, and she has inspired scores of singers including k. d. lang, Loretta Lynn, Linda Ronstadt, Trisha Yearwood, and Wynonna Judd. Her brief career produced the #1 jukebox hit of all time, “Crazy” (written by Willie Nelson) and her unique, crying style and vocal impeccability have established her reputation as the quintessential torch singer.

Sweet Dreams (Of You) – Patsy Cline

I Fall to Pieces – Patsy Cline

Patsy Cline’s short life reads like the heart-torn lyrics of many of the ballads she recorded. Born Virginia Patterson Hensley in Winchester, Virginia, in the midst of the Depression, she demonstrated musical proclivity at an early age—a talent inherited from her father, an accomplished amateur singer who, Cline later said, sexually abused her as a child. The family moved nineteen times around the state of Virginia before “Ginny,” as she was known in her youth, turned fifteen. A perpetual outsider, Cline dropped out of school at fifteen to support her family after her father deserted them. They settled in Winchester, the Shenandoah Valley town with which she would grow to have a love-hate relationship.

Haunted by her early experiences, the teenaged Cline directed herself toward a career as a singer with unbending single-mindedness. She sang in juke joints in the Winchester area and did a nightclub cabaret act reminiscent of Helen Morgan, the tear-stained pop chanteuse of the 1920s said to be one of Cline’s primary influences (along with Kay Starr, Kate Smith, and Charline Arthur). She also appeared in amateur musicals, talent shows, and on local radio station WINC.

By age twenty Cline connected with local country bandleader Bill Peer, an association that nurtured her desire to become a country music star. She adopted the name “Patsy” after her middle name, Patterson, possibly in a nod to singer Patsy Montana, whose feisty cowgirl persona anticipated both Cline’s spunk and early stage costuming. She married her first husband, staid Gerald Cline, on March 7, 1953, but she found the relationship unfulfilling and they divorced four years later.

During this period Cline made inroads into the thriving Washington, D.C. country music scene masterminded by country music’s “media magician,” Connie B. Gay. Beginning in the fall of 1954, Gay spotlighted Cline as a featured soloist on his Town & Country regional TV broadcasts, which included Jimmy Dean as host, along with Roy Clark, George Hamilton IV, Billy Grammer, Dale Turner, and Mary Klick. Through her web of Washington contacts Cline landed her first recording contract in September 1954, with Bill McCall’s Pasadena, California-based 4 Star Records, an association that lasted six years and was to become the single greatest hindrance to her career. Cline alleged that McCall swindled her out of record earnings and gave her substandard material to record.

Cline’s debut single, the country weeper “A Church, a Courtroom and Then Goodbye,” sold poorly when released in July 1955 on the Decca label’s Coral subsidiary (by lease arrangement between McCall and Decca A&R man Paul Cohen). Cohen turned production over to his protégé and eventual successor, Owen Bradley, who became Cline’s guiding light for the duration of her recording career.

Cline’s first four singles flopped, but the “hillbilly with oomph” act she developed on TV and in personal appearances earned her regional fame. Her recording stalemate ended when she made her national TV debut on Arthur Godfrey’s Talent Scouts show on January 21, 1957, singing “Walkin’ After Midnight,” which hit #2 country and #12 pop. Cline rode high on the hit for the next year, doing personal appearances and performing regularly on Godfrey’s weekly CBS broadcast Arthur Godfrey and Friends and on ABC’s Country Music Jubilee, but there were no follow-up hits. Her September 1957 marriage to second husband Charlie Dick resulted in a tumultuous relationship glamorized in Sweet Dreams, the 1985 film of Cline’s life, starring Jessica Lange. By the end of 1957 Cline had retreated into semi-retirement.

After giving birth to a daughter (Julie) in August 1958, Cline moved to Nashville and signed with manager Randy Hughes, who attempted to revive her stone-cold career by booking one-nighters across the country and helping her ride out her 4 Star contract. Back to working $50 gigs, she was at the nadir of her career when the Grand Ole Opry belatedly made her a member on January 9, 1960. That summer she signed with Decca, and Bradley began to direct her towards becoming a leading exponent of the emergent Nashville Sound, beginning with her recording of the Harlan Howard-Hank Cochran tune “I Fall to Pieces.” Cline initially fought Bradley’s lush arrangements, which featured backings by the Jordanaires.

Cline gave birth to a son (Randy) in January 1961 and survived a near-fatal car accident in June as “Pieces” slowly started its climb up the charts, reaching #1 country in August and #12 pop eight months after its release. Cline maintained her chart momentum with the Top Ten hits “Crazy” and “She’s Got You” and with albums like Patsy Cline Showcase and Sentimentally Yours. Other highlights included appearances at Carnegie Hall and the Hollywood Bowl, and on Dick Clark’s network TV program American Bandstand. Cline joined The Johnny Cash Show as the touring group’s star female vocalist in January 1962, and over the next fourteen months she played about fifteen or twenty dates with Cash’s “family,” which then included Don Gibson, George Jones, Carl Perkins, June Carter, Barbara Mandrell, Gordon Terry, and Johnny Western.

Cline shared her premonitions of her death with close friends Loretta Lynn, Dottie West, and June Carter as early as September 1962. Her last public performance was a benefit in Kansas City on March 3, 1963. Returning home, she was killed in a plane crash that also took the lives of pilot Randy Hughes and fellow Opry stars Cowboy Copas and Hawkshaw Hawkins. Cline’s singles “Leavin’ on Your Mind” and “Sweet Dreams (of You)” charted in the Top Ten after her death. Numerous recordings have appeared since her death, and she has remained one of the Universal label’s most consistent sellers. (Decca was absorbed by MCA, which in turn became part of Universal.) In addition to Sweet Dreams, Cline was also the subject of the hit 1990s play Always . . . Patsy Cline.

In 1973 she became the first solo female artist elected to the Country Music Hall of Fame. 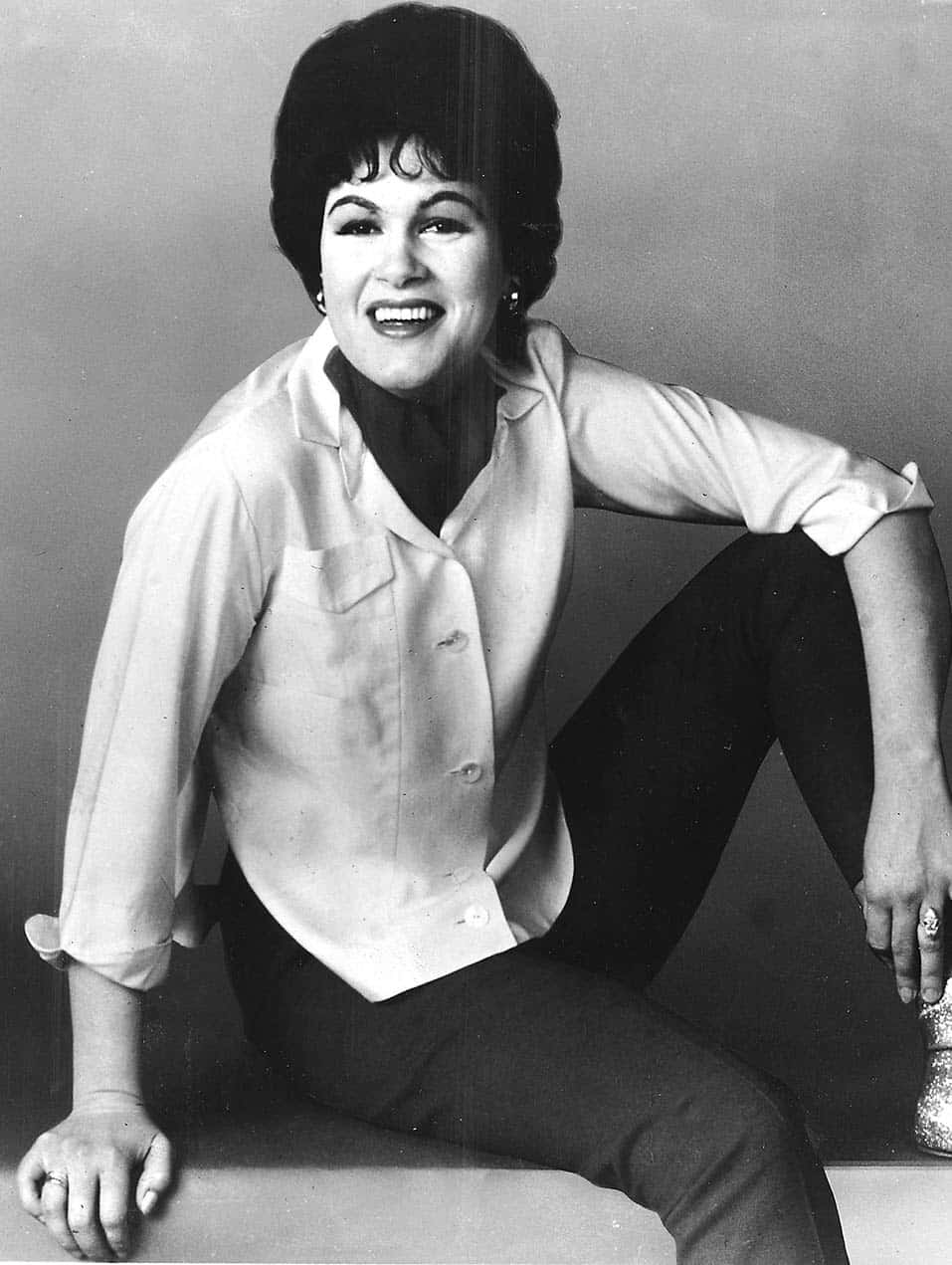