Best known for the signature background harmonies they provided for dozens of other stars, the Jordanaires were organized in the late 1940s and became a leading gospel quartet before serving as key contributors to the Nashville Sound. 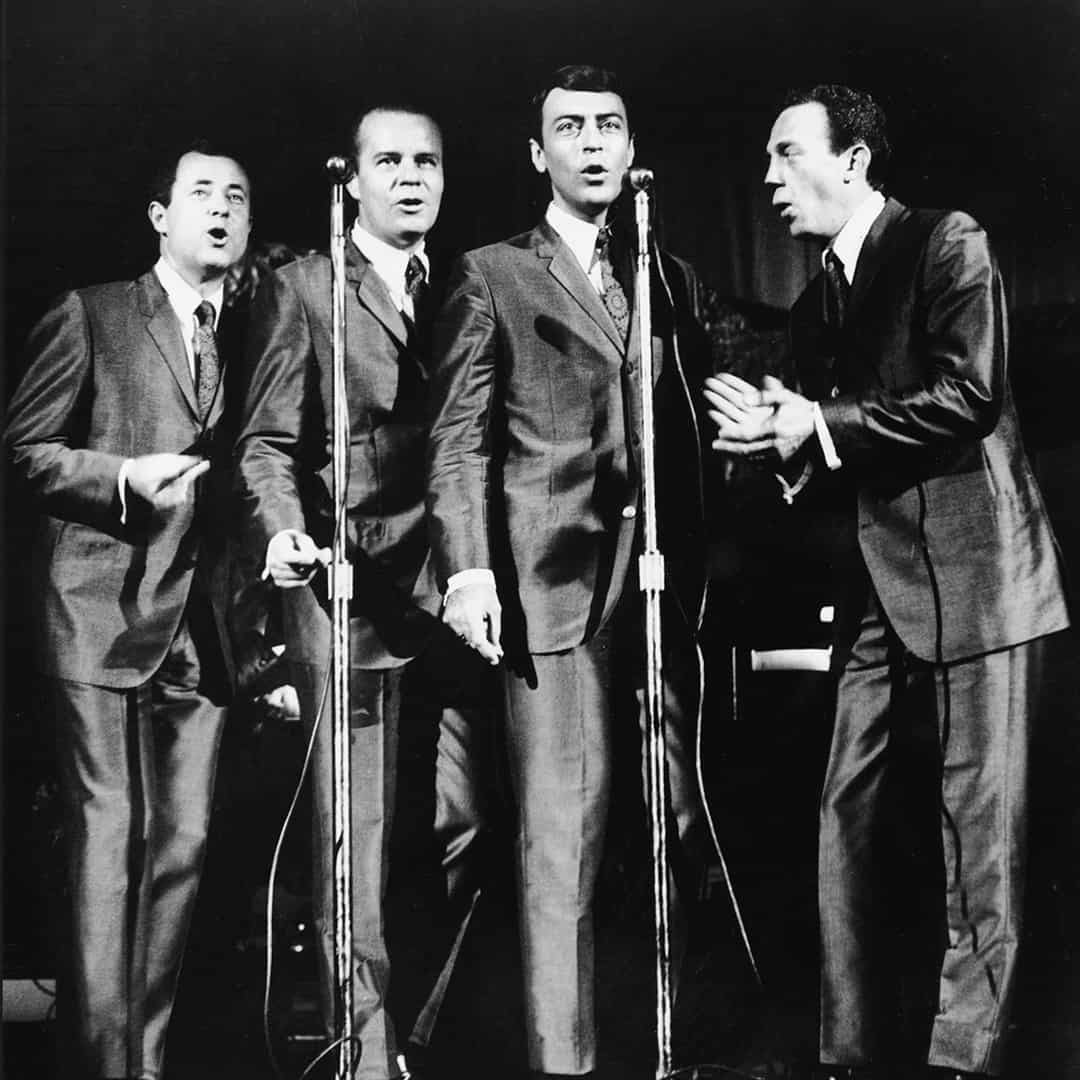 The group was formed in Springfield, Missouri, by two evangelists, Bill Matthews and his brother Monty.

Gordon Stoker, then a popular pianist with the WSM gospel ensemble the John Daniel Quartet, replaced Money in 1949, by which time the group had moved to Nashville to back Grand Ole Opry headliner Red Foley. Before long Stoker began singing lead and tenor, and after the Matthews brothers returned to Missouri early in the 1950s, the group reorganized. Stoker stayed on, mostly handling tenor duties, while second tenor Neal Matthews Jr. (no relation to Bill and Monty), baritone Hoyt Hawkins, and bass Hugh Jarrett came on board by 1955. Ray Walker replaced Jarrett in 1958, completing the Stoker-Matthews-Hawkins-Walker combination that would anchor the group for more than two decades and would be the lineup elected to the Country Music Hall of Fame.

By 1950 the Jordanaires were becoming noted for their spirited renditions of songs associated with both the black and white gospel traditions. They continued to mine this musical vein after signing with Capitol in 1951. In addition, the group had begun singing background on records by country hitmakers such as Foley (“Just a Closer Walk with Thee”). Their regular spots on the NBC network portion of the Grand Ole Opry and on 1955’s Eddy Arnold Time, a popular syndicated TV show of the day, brought the famed quartet into households across the nation.

Although the Jordanaires’ gospel albums would help them win election to the Gospel Music Hall of Fame in 2001, the group is best known for the signature background harmonies they provided for dozens of other stars. Individual members recorded with Elvis Presley beginning in 1956, and from 1958 into the early 1970s the foursome regularly backed him in the studio and in films. Early Presley hits such as “Don’t Be Cruel,” “Are You Lonesome Tonight,” and “It’s Now or Never” captured the group’s special sound and led to recording with other rock & rollers, including Ricky Nelson and Gene Vincent.

During the 1960s and beyond, the Jordanaires often worked as many as four sessions a day. Recordings they made with Ferlin Husky (“Gone,” widely regarded as one of the very first hit recordings to embody the Nashville Sound), Jim Reeves (“Four Walls”), and Patsy Cline (“Crazy”) best exemplified the smooth, pop-influenced side of Nashville’s multi-faceted recording scene, while the sounds they added to hits including Don Gibson’s “Oh Lonesome Me,” Johnny Horton’s “The Battle of New Orleans,” Tammy Wynette’s “Stand by Your Man,” Conway Twitty’s “Hello, Darlin’,” Kenny Rogers’s “Lucille,” and George Jones’s “He Stopped Loving Her Today” proved the quartet’s versatility. The group also backed pop acts such as Connie Francis, Steve Lawrence & Eydie Gorme, and Julie Andrews. The Jordanaires graced Grammy-winning recordings in five decades, as well as national television and radio ads such as Coca Cola’s “We’d Like to Teach the World to Sing” campaign. Their voices have been heard on hundreds of millions of records sold worldwide.

The Jordanaires’ contributions to the Nashville recording industry include the system of studio music notation first popularized by Neal Matthews Jr. and known internationally as the Nashville Number System. Advocates for broadcasting and film performers, the Jordanaires were also instrumental in establishing the Nashville offices of national performers’ unions representing radio and television artists and screen actors. After Hawkins died in 1982, Duane West joined the Jordanaires, but due to illness he left the group and was replaced in 2000 by Louis Nunley. Curtis Young joined in 2000 following Matthews’s death.

In 2001 the Jordanaires celebrated their fifty-first year in the music business and their election to the Country Music Hall of Fame. In 2002, in conjunction with Larry Ford & the Light Crust Doughboys, they won a Grammy Award in the category of Best Southern, Country, or Bluegrass Album, for We Called Him Mr. Gospel Music: The James Blackwood Tribute Album. Frequent headliners in Las Vegas, they made personal appearances overseas, carrying country music around the globe.

The passing in 2013 of longtime Jordanaires leader Gordon Stoker, who owned the group’s name, marked the end of the quartet’s remarkable and distinguished career.  –John Rumble