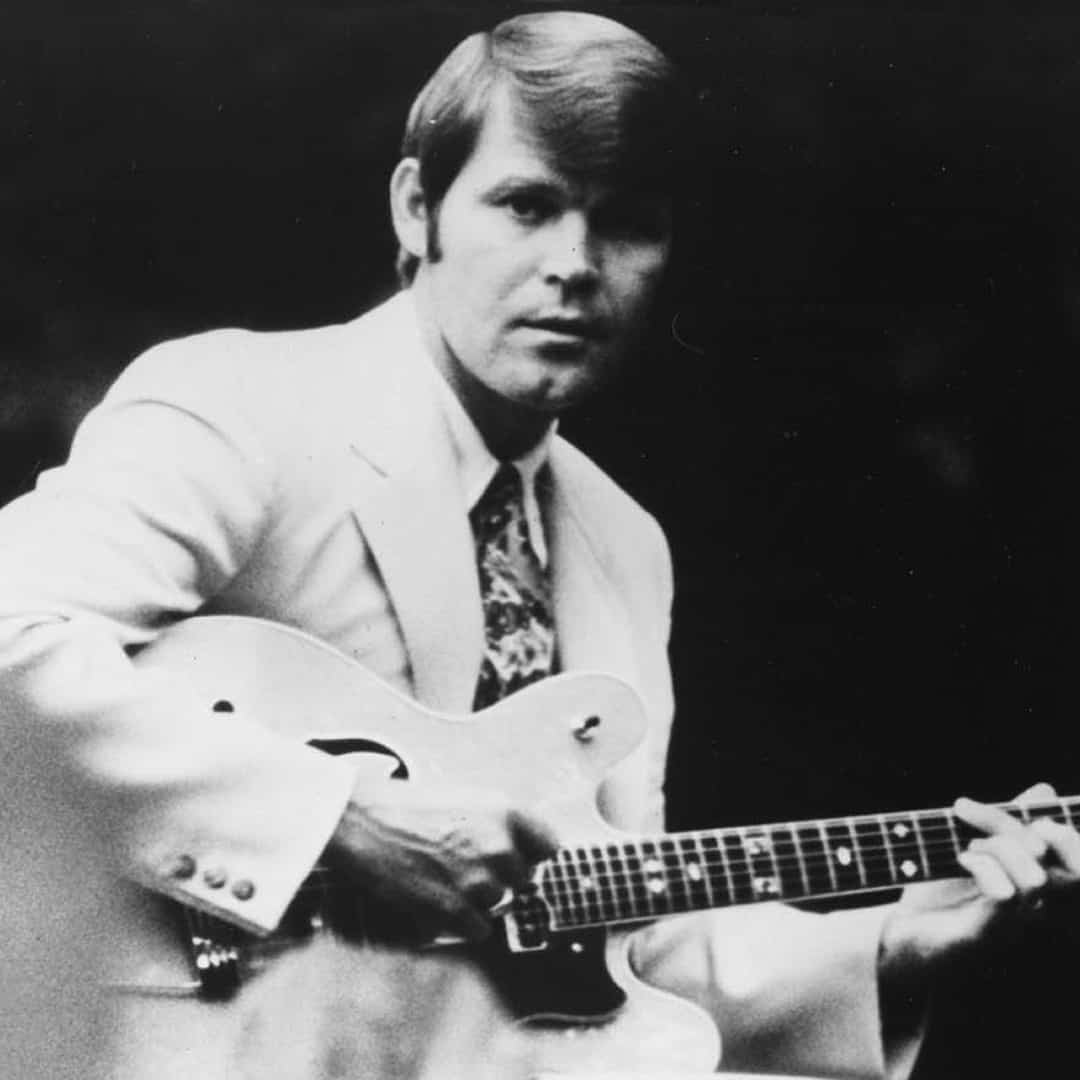 At his peak, Campbell hosted The Glen Campbell Goodtime Hour, a CBS-TV musical variety show, from 1968 to 1972. He also starred in several feature films, including True Grit (1969) with John Wayne.

“Gentle On My Mind” – Glen Campbell

Had Glen Campbell “only” played guitar and never voiced a note, he would have spent a lifetime as one of America’s most consequential recording musicians. Had he never played guitar and “only” sung, his voice would rank with American music’s most riveting, expressive, and enduring. He left indelible marks as a musician, a singer, and an entertainer, and he bravely shared his incalculable talent with adoring audiences even as he fought a cruel and dreaded disease. To all of us who heard and loved his soulful music, he was a delight.

The seventh son in a sharecropper’s family of twelve children, Campbell was born into hard times. From an early age he set himself apart with his proficiency on guitar, and by the time he was a teenager he was playing in his uncle’s western swing band.

By his early twenties, Campbell had moved to the West Coast. From October 1960 to May 1961 he toured as lead guitarist for the Champs, two years after they hit with “Tequila.” His first pop hit came in 1961 with “Turn Around, Look at Me” on Crest Records. In 1962 he played guitar and sang on “Kentucky Means Paradise,” a single by the Green River Boys. It was the first of Campbell’s efforts to hit the country charts, though he remained largely unknown to the public. The group released only one album, Big Bluegrass Special.

In 1962 he signed with Capitol Records, but for several years he recorded without success. Between 1962 and 1967 Campbell was in much more demand as a session guitarist and vocalist than as an artist. During the 1960s he worked with the Beach Boys, Bobby Darin, Merle Haggard, the Mamas & the Papas, Dean Martin, Rick Nelson, and Frank Sinatra, among countless others. In 1964 he toured briefly with the Beach Boys as Brian Wilson’s replacement. During these years Campbell also poured his instrumental prowess into his own records, cutting several guitar-dominated albums, including two with dobro specialist Tut Taylor and the Dillards in an ensemble billed as the Folkswingers.

Campbell’s breakthrough came with John Hartford’s modern hobo song “Gentle on My Mind” in 1967. Though it only reached #30 on the country charts and #39 on the pop charts, the song struck a chord with listeners. In 1990, in a testament to its abundant radio airplay, BMI named the song its fourth-most-played song to date.

Campbell scored his first country Top Five in 1967 with “By the Time I Get to Phoenix.” In 1968 he gained his first Top Five pop hit with “Wichita Lineman.” Between 1967 and 1980 Campbell effortlessly straddled country and pop, racking up thirty Top Twenty country hits and nineteen Top Forty pop records, including the crossover smashes “Galveston,” “Country Boy,” “Southern Nights,” and his signature song, “Rhinestone Cowboy.”

During the 1980s Campbell recorded for Warner Bros. and Atlantic, and he continued to have occasional Top Ten country hits. He lost commercial standing, however, as he dealt with substance abuse, three divorces, and a much-publicized tempestuous engagement to Tanya Tucker.

In 1987 Campbell was signed to MCA’s country division by record producer Jimmy Bowen, with whom he had worked extensively on West Coast recording sessions in the 1960s. At MCA Campbell had Top Ten hits with “The Hand That Rocks the Cradle” (with Steve Wariner), “Still Within the Sound of My Voice,” and “She’s Gone, Gone, Gone.” In 1990 he returned to Capitol Records.

In 1994 Campbell published his memoirs, Rhinestone Cowboy: An Autobiography, coauthored with Tom Carter. Campbell was elected to the Country Music Hall of Fame in 2005. In 2011 Campbell announced a farewell tour following a diagnosis of Alzheimer’s disease. His final performance was in November 2012, in Napa, California. A 2014 documentary, I’ll Be Me, was nominated for an Academy Award for Best Original Song; a soundtrack from the film, produced by Julian Raymond, won a Grammy. The film was widely praised for how frankly it dealt with the disease and how it affected Campbell, his family, and friends. In April 2017, Campbell released an album, Adios, recorded during his final sessions in 2012 and 2013. Campbell died on August 8, 2017, in Nashville, Tennessee. — Bob Allen