September 25: "Songs That Tell A Story" 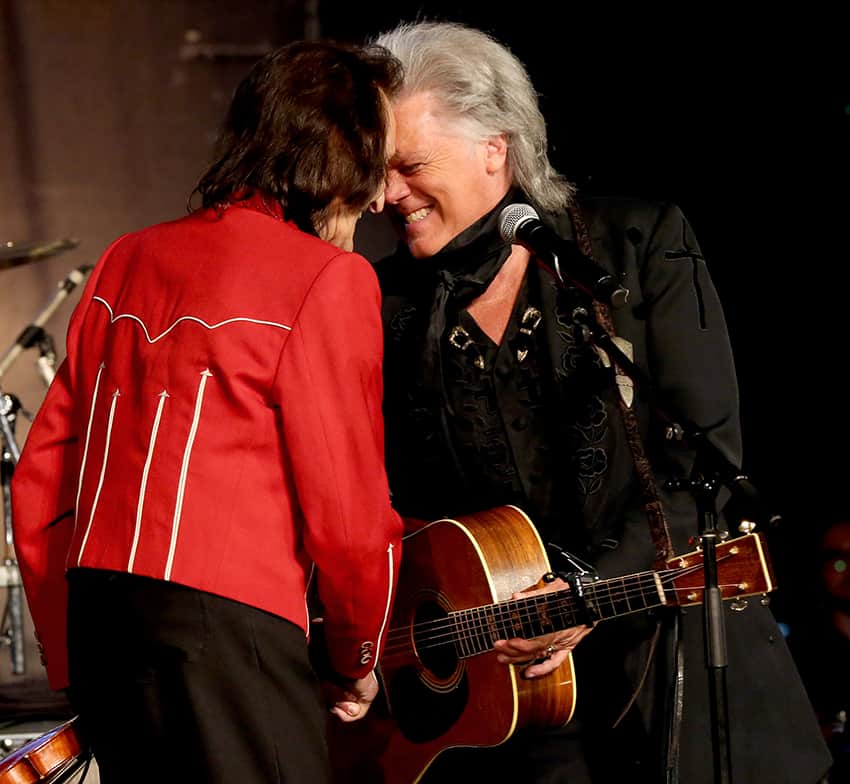 Marty Stuart paid tribute to two of country music’s strengths—songs that tell a story, and the wide variety of styles that make up the genre—during his third and final performance as the 2019 artist-in-residence at the Country Music Hall of Fame and Museum. Over the three-hour concert, Stuart and his guests served up bluegrass, Cajun, classic and contemporary country, cowboy tunes, gospel, mountain folk songs, and rockabilly.

“This room is a very versatile room,” Stuart said of the museum’s CMA Theater. “What this room really excels at, when this room really does its job, is when it’s taken down to the song and the heart. This is the living room of country music, and we welcome you in.”

Stuart toasted another songwriter, Paul Kennerley, who was in attendance. Kennerley wrote or co-wrote (with Stuart) several of Stuart’s 1990s hits, including “Hillbilly Rock” and “Tempted,” the latter of which Stuart and the Superlatives performed.

Introducing a performance early in the show by Dale Jett, grandson of A. P. and Sara Carter, Stuart explained the importance of the Carter Family to the continuing legacy of country music. Jett performed an original, “Orphans and Strays,” and one of his grandfather’s songs, “The Cyclone of Rye Cove,” based on a true story about a tornado that, in 1929, destroyed a schoolhouse, killing a teacher and twelve students, near Maces Springs, Virginia, where the Carters resided.

The Carter Family came up again at the end of the concert. Stuart brought out a Martin guitar that once belonged to Jimmie Rodgers. Stuart purchased the instrument recently and had it restored, and he chose Wednesday’s residency concert for the guitar’s first public performance in fifty-five years.

Stuart used the 1928 Martin to play an obscure Sara Carter original titled “Farther On,” issued in 1966 on an album by Maybelle and Sara Carter. The song appeared again on a 2010 album, with John Carter Cash handling lead vocals.

Stuart’s decision to close the final night of his residency with a Carter song played on a Rodgers guitar confirmed that he grasped the gravity of being named the artist-in-residence by the Country Music Hall of Fame and Museum.

John Prine started his set with a recent song, “Egg and Daughter Nite, Lincoln, Nebraska, 1967 (Crazy Bone)” and ended with “Paradise,” from his 1971 debut. Prine wrote “Paradise” near the end of his two-year stint in the army, inspired by a a letter from his father that included a newspaper story about a coal company purchasing all the land in Paradise, Kentucky—his father’s beloved hometown.

“I wrote it for two reasons,” Prine said. “First of all, I wanted to put him in the song, because I knew he’d like the song if he was in it. And the second reason was that I wanted him to know I was a songwriter.”

Doug Kershaw, like Prine, performed a song he had written at the end of army service. As he became a civilian, Kershaw considered what he could do with his life.  “My main thought was not to be embarrassed that I was a Cajun,” he said. “So I wrote this song.”

Kershaw performed the autobiographical “Louisiana Man” at a slower tempo than usual, emphasizing the lyrics rather than the gleeful Cajun fiddle breakdown that powered the original.

Kershaw acknowledged the freedom and inspiration he felt sharing a stage with Stuart. “I’ve played, my God, I’ve performed onstage with a lot of people,” Kershaw said, then looked to Stuart. “This man makes me feel good. He makes me want to make music.”

Stuart’s deep knowledge of country music history and his ability to articulate the music’s importance led documentarian Ken Burns to give Stuart a central role in the all-encompassing PBS documentary series Country Music. Stuart pointed out how one of his comments used in the Counry Music series applied to Kershaw and how he brought music from his home state of Louisiana to a wider audience. Kershaw, Stuart said, is part of the “beautiful parade of the sons and daughters of America [who] brought their hometowns, their backgrounds, and their family stories to the table and made records.”

“There Goes My Everything”

In 1965, after moving to Nashville, Dallas Frazier shared an apartment with his mentor, singer Ferlin Husky. Frazier wrote “There Goes My Everything” after observing Husky struggle through a painful divorce. Jack Greene’s dramatic take on “There Goes My Everything” spent eight weeks at #1 on the country charts in 1966. Frazier’s subtle, fragile performance of his famous song brought out all of its inherent heartache.

Brandy Clark dedicated “Hold My Hand” to its co-writer, Mark Stephen Jones. The two songwriters had struggled to finish the composition until they had a conversation about jealousy and insecurity. Their talk inspired Jones to write the song’s opening stanza, after which the two writers quickly finished the song. Clark’s sensitive, slow-boiling version evoked every tender chord of the song’s lyrics.

Check out recaps from Marty Stuart's other Artist-in-Residence shows!