Marty Stuart’s grasp of the abundance of styles that comprise country music was on full display at his first artist-in-residence concert at the Country Music Hall of Fame and Museum on Wednesday, September 11, 2019. From bluegrass to honky-tonk, from folk music to spirituals, Stuart mined the sounds and influences of country music while performing the complete song cycle from one of his most critically acclaimed albums, The Pilgrim. 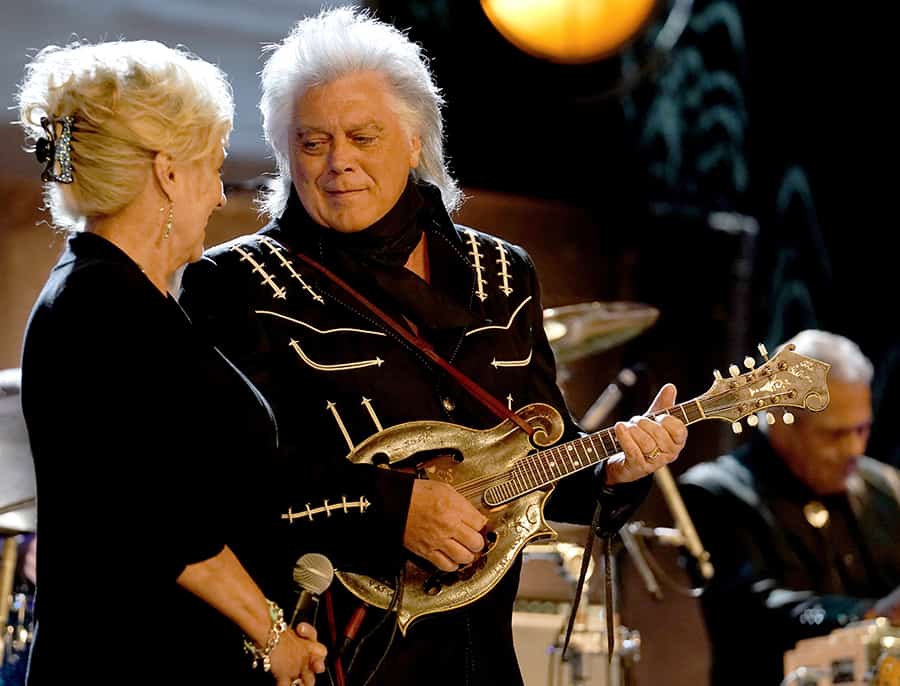 “This will be one of the most honest shows of my life,” Stuart said during an extended introduction, as he explained his motivation for focusing the evening on recreating the album in concert for the first time.

Stuart released The Pilgrim twenty years ago. After nearly a decade of hits as an MCA recording artist, Stuart hungered to create something more adventurous and more personal than his previous work. An ambitious and grandly epic undertaking, The Pilgrim featured a series of songs and short instrumental passages that told a dramatic tale of love, loss, dissipation, and redemption.

Recalling his mindset when he conceived of The Pilgrim, Stuart said he traveled the country, meeting with heroes, artists, actors, and sages, seeking to find what he couldn’t quite comprehend. Eventually, he had an epiphany, inspired by the story of a man caught in a fateful love triangle in Stuart’s hometown of Philadelphia, Mississippi. With a concept in hand, he set out to create music that came from a deeper artistic and spiritual place—“music that fed my heart and soul,” he told the audience.

Although the album did not yield any hits and did not sell well, over time it has been embraced as a cult favorite for its aspirational songwriting and sharp musicianship. In introducing the concert, Peter Cooper of the Country Music Hall of Fame and Museum compared The Pilgrim to such classic American roots albums as the Byrds’ Sweetheart of the Rodeo and Willie Nelson’s Phases and Stages—albums that grew in artistic stature and influence after a slow start.

“The Pilgrim ages like Pappy Van Winkle whiskey,” Cooper said. “Its truths and joys and challenges continue to resonate. Perhaps most heartening, it set Marty off on what amounts to a second career where the past and present are entwined like newlywed fingers.”

Also on this day, Stuart released a twentieth-anniversary edition of The Pilgrim, with several bonus cuts and a commemorative book. His artist-in-residence concert, the first of three, began with a five-minute, impressionistic film that touched on the album’s images and Stuart’s career in country music, which began at age twelve.

For the concert, Stuart invited guests Emmylou Harris, Pam Tillis, and arranger Kristin Wilkinson’s four-piece string section, all of whom appeared on the original recording. Stuart’s wife, Connie Smith, and contemporary country star Chris Stapleton also performed with Stuart and his band, the Fabulous Superlatives—bassist Chris Scruggs, drummer Harry Stinson, and guitarist Kenny Vaughan. The recorded voices of Johnny Cash, George Jones, and Ralph Stanley, all featured on The Pilgrim, echoed through the museum’s CMA Theater at points during the show, as part of ongoing film footage that focused on American iconography, including crows, desert landscapes, hobos, trains, and small-town buildings, signs, and street scenes from the early and mid-twentieth century.

The album’s standing among music fans was underscored by the great distances audience members traveled to attend the one-night-only performance. Stuart recognized travelers from Germany, California, and Ohio, while other audience members shouted that they had come from Australia, Canada, Florida, Illinois, Maine, Norway, and Texas to take in the concert.

Established in 2003, the museum’s annual artist-in-residence program features a musical master who can be credited with contributing a significant body of work to the canon of American popular music.  Previous artists who have performed in-residence include Cowboy Jack Clement, Earl Scruggs, Tom T. Hall, Guy Clark, Kris Kristofferson, Jerry Douglas, Vince Gill, Buddy Miller, Connie Smith, Kenny Rogers, Ricky Skaggs, Alan Jackson, Rosanne Cash, Jason Isbell, and Miranda Lambert. The artists-in-residence are given the museum’s stages to use as a blank canvas and they are encouraged to step away from their usual concert presentations to create one-of-a-kind musical experiences. 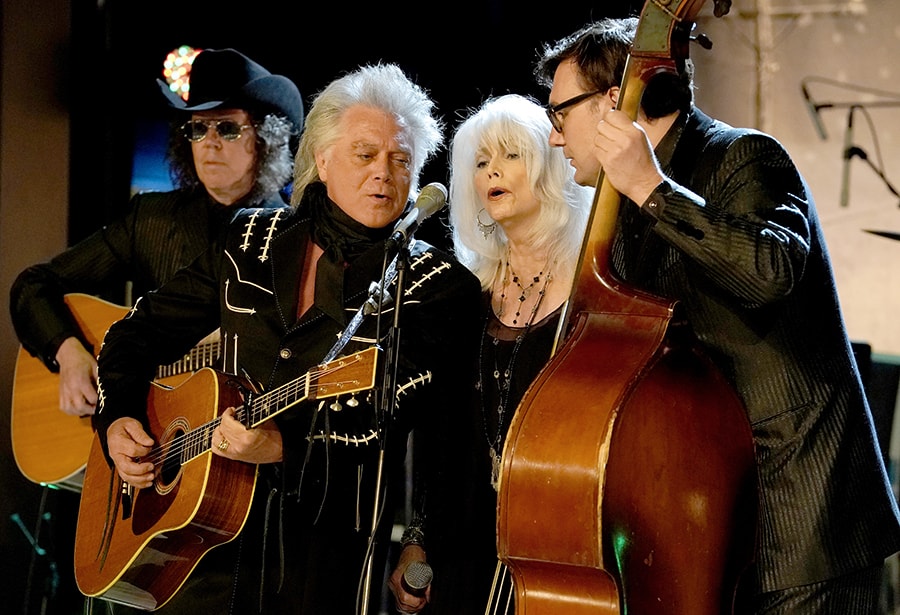 One of the purest honky-tonk songs on The Pilgrim, this Bakersfield-inspired tune manages to be both a shuffle and a waltz, and the Fabulous Superlatives locked into a groove as tight as guitarist Kenny Vaughan’s black trousers. The live version highlighted Pam Tillis’s impassioned harmonies more than the recorded version, and Gary Carter showed his brilliance on steel guitar vamps that peppered the arrangement.

Emmylou Harris reprised her lead vocals on the original album, after the recorded voice of the late George Jones—in all its tone-shifting, note-sliding glory—opened the song, just as it did twenty years ago. On the record, the song lasted less than a minute and a half, with Stuart’s acoustic guitar offering hints of Mother Maybelle Carter’s iconic, melodic lead on the Carter Family’s “You Are My Flower.” In concert, Stuart extended the Carter Family reference to include a large part of “You Are My Flower,” with Harris joining him in a duet on the classic song. It fit right in with the rest of The Pilgrim and the album’s incorporation of and references to all manner of country music history. 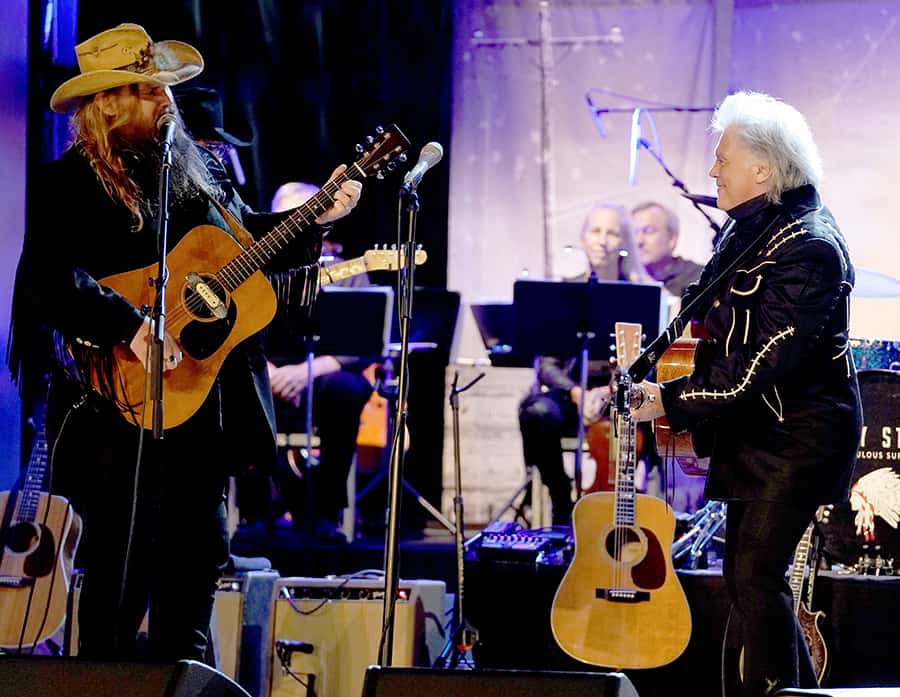 “Draggin’ Around These Chains of Love”

Stuart brought out Chris Stapleton, whom he referred to as “Earthquake” Stapleton because of the power of his soulful voice, to perform this moody, bluesy country-rocker. Stapleton’s growling voice proved perfect for expressing the feelings of a heartbroken man facing a moment of truth. The song, one of only three Stuart co-writes on the album, was a collaborative effort between Stuart and Mike Campbell of Tom Petty & the Heartbreakers. Campbell’s knack for writing melodic, driving guitar riffs captured the energy of a broken, lonesome man striving to put himself back together.

Stuart returns to the museum’s CMA Theater for performances as artist-in-residence on September 18 and 25.

Check out recaps from Marty Stuart's other Artist-in-Residence shows!