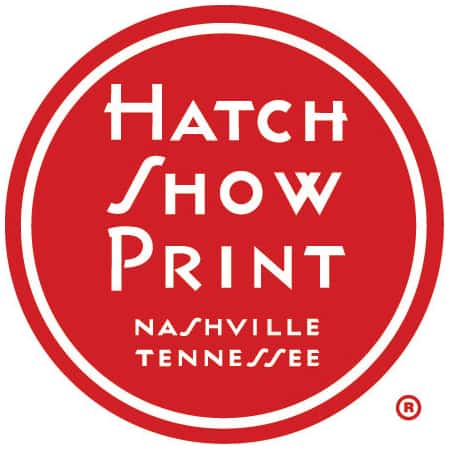 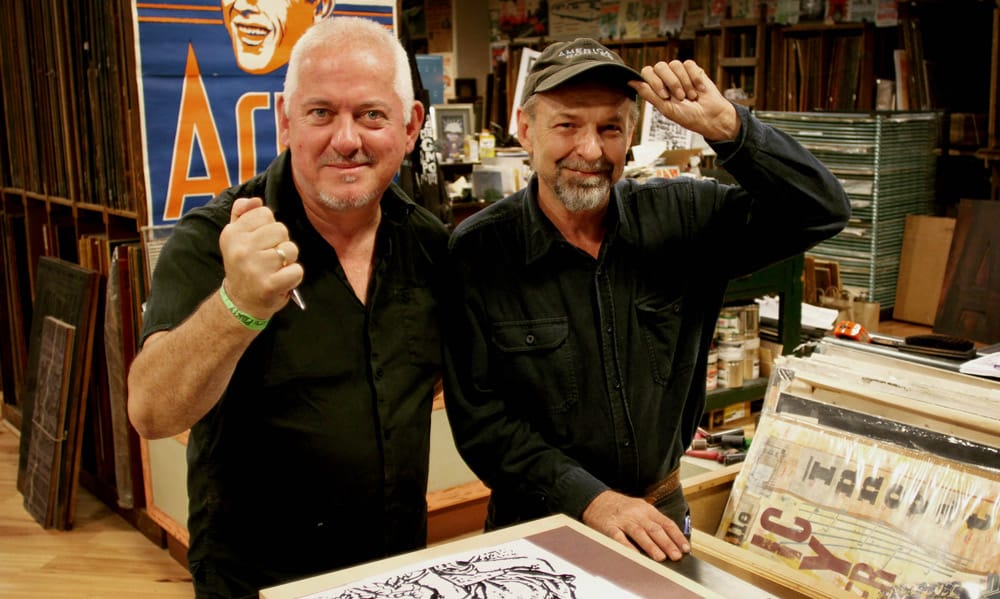 Hatch Show Print, one of the oldest working letterpress shops in America, has announced a collaboration between master printer Jim Sherraden and Chicago-based musician and painter Jon Langford, the artist behind the look and design of the Country Music Hall of Fame and Museum’s exhibition Dylan, Cash, and the Nashville Cats: A New Music City. Their work will be unveiled during Nashville’s monthly First Saturday Art Crawl, taking place Saturday, October 3, from 6:00 to 9:00 p.m. at Hatch Show Print’s Haley Gallery.

Sherraden and Langford joined forces to create a limited edition monoprint based on Bob Dylan’s lyrics to “Girl from the North Country,” recorded by Dylan in Nashville as a duet with Johnny Cash in 1969. Langford was also invited to work with designer-printer Alex MacAskill to create a poster for the museum’s Dylan, Cash, and the Nashville Cats exhibit, show-poster-style, incorporating more of Langford’s signature imagery, carved by hand for relief printing

In addition to the limited edition piece created by Sherraden and Langford, and the show-poster-style prints, Hatch Show Print’s Haley Gallery will feature original works by Langford in his trademark style throughout the month of October.

“For us, a collaboration between the talented Jon Langford and the artists at Hatch Show Print made complete sense,” said Sharon Brawner, senior vice president of sales and marketing at the Country Music Hall of Fame and Museum. “Langford defined the visual identity of the Dylan, Cash, and the Nashville Cats exhibition with flair. When he expressed interest in the work going on at Hatch, we were excited to bring him on board as Hatch Show Print’s first ever artist-in-residence.”

About Jon Langford
Jon Langford is a musician and painter based out of Chicago. Originally from Wales, Langford celebrates a blend of punk rock and the most American of Americana—rock & roll and country music. A founding member of the punk band the Mekons, Langford has also been a member of the Three Johns, Waco Brothers, the Pine Valley Cosmonauts, and Ship and Pilot. Langford is an accomplished artist, renowned for his multi-layered paintings of famous and forgotten figures from the dawn of country music. Nashville Radio, a collection of his artwork and writings, was published in 2006.

To learn more about Jon Langford and his work, click here.

About Jim Sherraden
Jim Sherraden was introduced to Hatch Show Print in 1984 by a Vanderbilt University art instructor who noticed Sherraden’s wood and linoleum prints hanging in a local restaurant. Sherraden visited Hatch, and shortly thereafter was offered an opportunity to work at the shop, where he spent the next several years as shop manager and curator, overseeing the collection of one of Nashville’s most iconic landmarks.

In 1992, Sherraden began creating artwork from the shop’s collection of hand-cut blocks, designed and carved by shop co-founder Charles Hatch’s son Will T. Hatch and the shop staff. Sherraden’s contemporary creations from the historic blocks—monoprints—are collected by individuals and institutions worldwide. In 2005, Sherraden returned to carving his own woodcuts, developing a new body of work that includes the artist cutting up his printed pieces and mixing and matching the patchwork imagery, resulting in quilt-like compositions.

To learn more about Jim Sherraden and his work, click here.

Founded by brothers Charles and Herbert Hatch, Hatch Show Print  opened in Nashville in 1879. For much of the twentieth century, the shop’s vibrant posters served as a leading advertising medium for Southern entertainment, and included work for many members of the Grand Ole Opry such as Bill Monroe, Minnie Pearl, and Ernest Tubb, and for rock & roll greats such as Elvis Presley and Chuck Berry. Thousands of posters and billboard-size advertisements were printed for traveling vaudeville and minstrel shows, circuses, and carnivals barnstorming across the country. In 1992, Hatch Show Print became a historic property of the Country Music Hall of Fame® and Museum. Today, Hatch Show Print is a thriving letterpress poster and design shop in downtown Nashville, with seven full-time designer-printers on staff. The shop creates and prints 500 to 600 poster jobs every year, and the client list ranges from Mumford & Sons to Willie Nelson, and includes brands such as Fossil, Taschen, and the U.S. Postal Service. For more information about tours or the history of the shop, visit www.hatchshowprint.com.