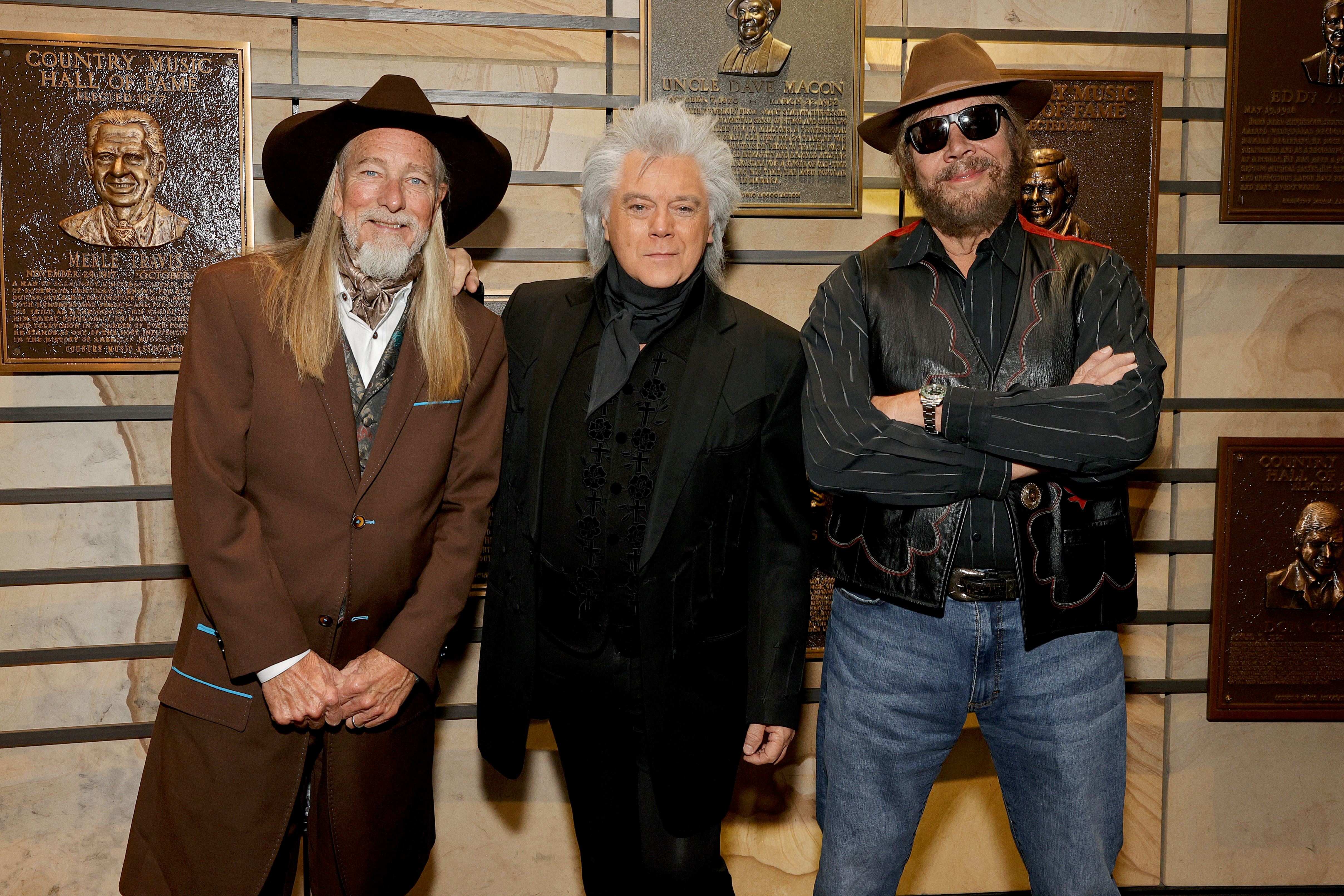 
Three distinguished artists from vastly different backgrounds—each of whom committed himself to country music early in life—were welcomed into the Country Music Hall of Fame during a star-studded, emotionally moving Medallion Ceremony on Sunday, November 21.

Dean Dillon, Marty Stuart, and Hank Williams Jr. were honored in the CMA Theater at the Country Music Hall of Fame and Museum with heartfelt testimonials and once-in-a-lifetime musical tributes over the three-hour ceremony. “This is the pinnacle for what we do,” Hall of Fame member George Strait said when inducting songwriter Dean Dillon.

Country Music Hall of Fame and Museum CEO Kyle Young, in his introduction, said: “These three men traveled very different paths to earning country music’s most hallowed honor. . . . One [was] raised middle class, one impoverished, and one wealthy. They’ll forever be honored together at this museum.”

The new inductees shared another attribute: each made a crucial decision at a turning point in his career that ultimately led to country music’s greatest honor. Dillon, after releasing six albums, decided to focus on songwriting, even though it meant leaving behind his life as a recording artist. Stuart, after a string of hit albums in the 1990s, chose to stop pursuing radio hits to devote himself to a deeper form of artistry that embraced a variety of country music styles. Williams, after more than a decade of modeling himself after his father, Country Music Hall of Fame member Hank Williams, pivoted and started recording albums that incorporated blues, honky-tonk, and Southern rock while writing from an autobiographical point of view.

Considered country music’s most prestigious event, the Medallion Ceremony celebrates the moment when inductees officially become members of the Country Music Hall of Fame. The ceremony spotlights the special talents and achievements that have made each new member deserving of country music’s highest honor. Underwritten by the CMA and produced by the Country Music Hall of Fame and Museum, the program includes emotional speeches, musical tributes, and video biographies created by museum staff. The videos feature rare recorded performances, televised interviews, and historic photos culled from materials collected, stored, and digitized in the museum’s Frist Library and Archive.

Honoring the Hall of Fame members who died since the last Medallion Ceremony, the audience observed a moment of silence in memory of Charlie Daniels, Don Everly, Tom T. Hall, Charley Pride, Harold Reid of the Statler Brothers, and Kenny Rogers. 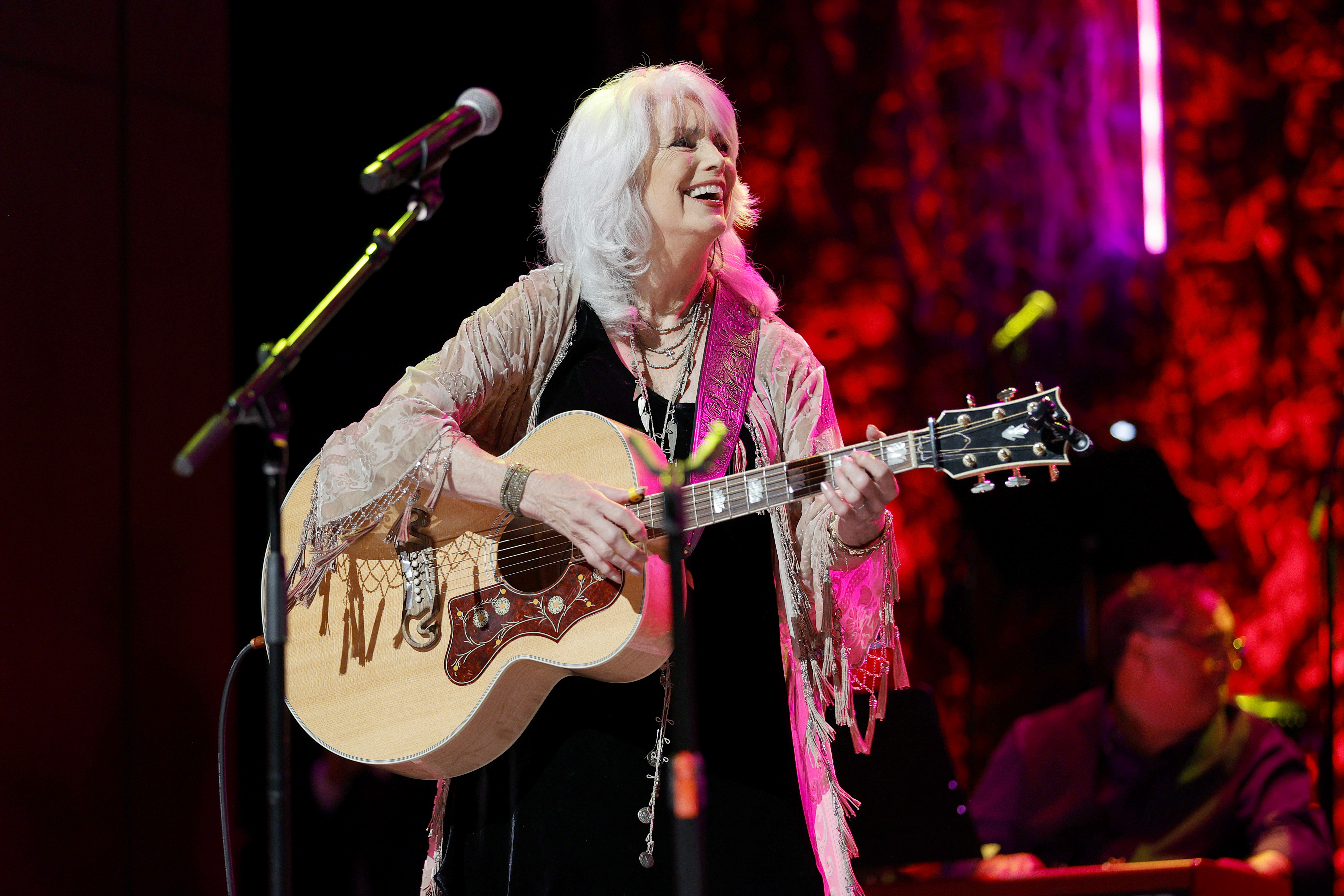 The musical tribute to Stuart’s career began with pastor Evelyn Hubbard, from the Commerce Boulevard Christian Church in Tunica, Mississippi, accompanying herself on a Hammond B-3 organ as she sang “It’s Time to Go Home,” a spiritual written by Stuart. Hubbard met Stuart and his wife when the couple were driving home after a 1999 New Year’s Eve concert appearance. Smith suggested they find a late-night church service, and they stopped at Hubbard’s church, as she led the service and sang hymns. The couple and Hubbard have remained in each other’s lives ever since.

In presenting the Hall of Fame medallion to Stuart, his wife Smith called him a “reconciler.” “Marty is driven to bring his music to everyone,” she said. When they met as like-minded artists, in 1994, Stuart told her he wanted to be on a first-name basis with the universe. “And now he is,” she said, adding later, “I am as proud of who he is as I am of all he’s accomplished, and I am very proud of the things he’s achieved. He deserves to be in this Hall of Fame. It’s the fulfillment of his every dream.”

Stuart, in his acceptance speech, noted that he started his first band at age nine with two friends. At the time, other bands in his hometown of Philadelphia, Mississippi, played popular songs by the Beatles, Rolling Stones, and other British Invasion acts. Saying he wanted to be “a correspondent for country music,” Stuart and his friends performed songs by Johnny Cash, Merle Haggard, and Buck Owens.

“It wasn’t a whole lot different last night when we played,” he said, connecting a thread from his childhood performances to a Saturday night concert by Stuart and his band, the Fabulous Superlatives. “I still feel like a correspondent for the music of Hank Sr. and Merle Haggard and Johnny Cash and the culture of country. It’s what I love.” 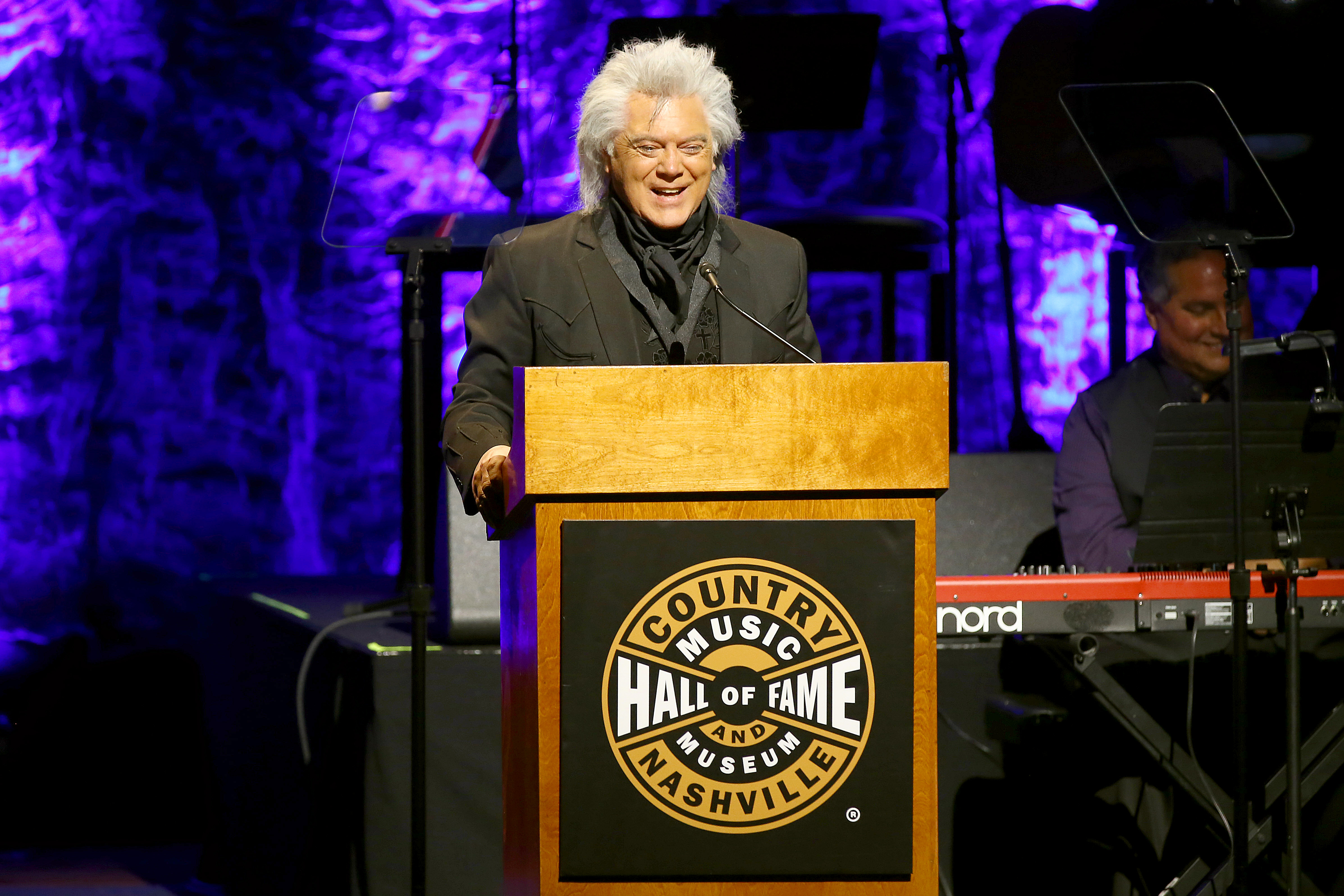 Kenny Chesney opened the tribute to his fellow East Tennessee native with a touching rendition of his 2002 Top Ten hit, “A Lot of Things Different,” co-written by Dillon and fellow Country Music Hall of Fame member Bill Anderson. Chesney recalled Bruce Springsteen asking if he wrote his hit “A Lot of Things Different.” Chesney wished he could tell the Boss he did, but he credited Dillon and Anderson. “He went on and on and on about what that song meant to him,” Chesney said of Springsteen. “I was very proud.”

Rising country singer Brittney Spencer took on the difficult role of performing “Tennessee Whiskey,” written by Dillon and the late Linda Hargrove. Best-known from recordings by George Jones and Chris Stapleton—two of country music’s most impressive vocalists—“Tennessee Whiskey” gained another memorable version in Spencer’s soulful, simmering performance. As she left the stage, Williams stood in the front row and fanned his hat toward Spencer, in a gesture of respect, and Hall of Famer Brenda Lee loudly shouted her approval from the audience.

Dillon’s tribute ended with a performance by George Strait, who has a career-long association with the songwriter, having recorded dozens of Dillon compositions since his first album in 1981. As Young, the Hall of Fame CEO, said in introducing Strait, “They have enjoyed one of the most successful writer-artist relationships in the history of country music.” Strait performed his 1985 #1 hit, “The Chair,” written by Dillon and another Hall of Fame member, Hank Cochran.

Dillon, in the most emotional speech of the evening, recalled the moment when Strait asked about a song he had written, “Easy Come, Easy Go.” Dillon had not pitched it to Strait, he told him, because Atlantic Records planned to release Dillon’s recording as the first single from an upcoming album. Producer Tony Brown, sitting nearby, told Dillon that he could promise him that MCA Records would make sure the song went to #1 if he gave it to Strait.

“I did the math in my head,” Dillon said, drawing laughter from the crowd. “I thought, ‘Do you want a record career, or do you want to be a songwriter?’ In my heart of heart of hearts, I knew what I loved the most. I looked at him and said, ‘You can have it,’ . . . and I can tell you it’s the smartest decision I ever made.” 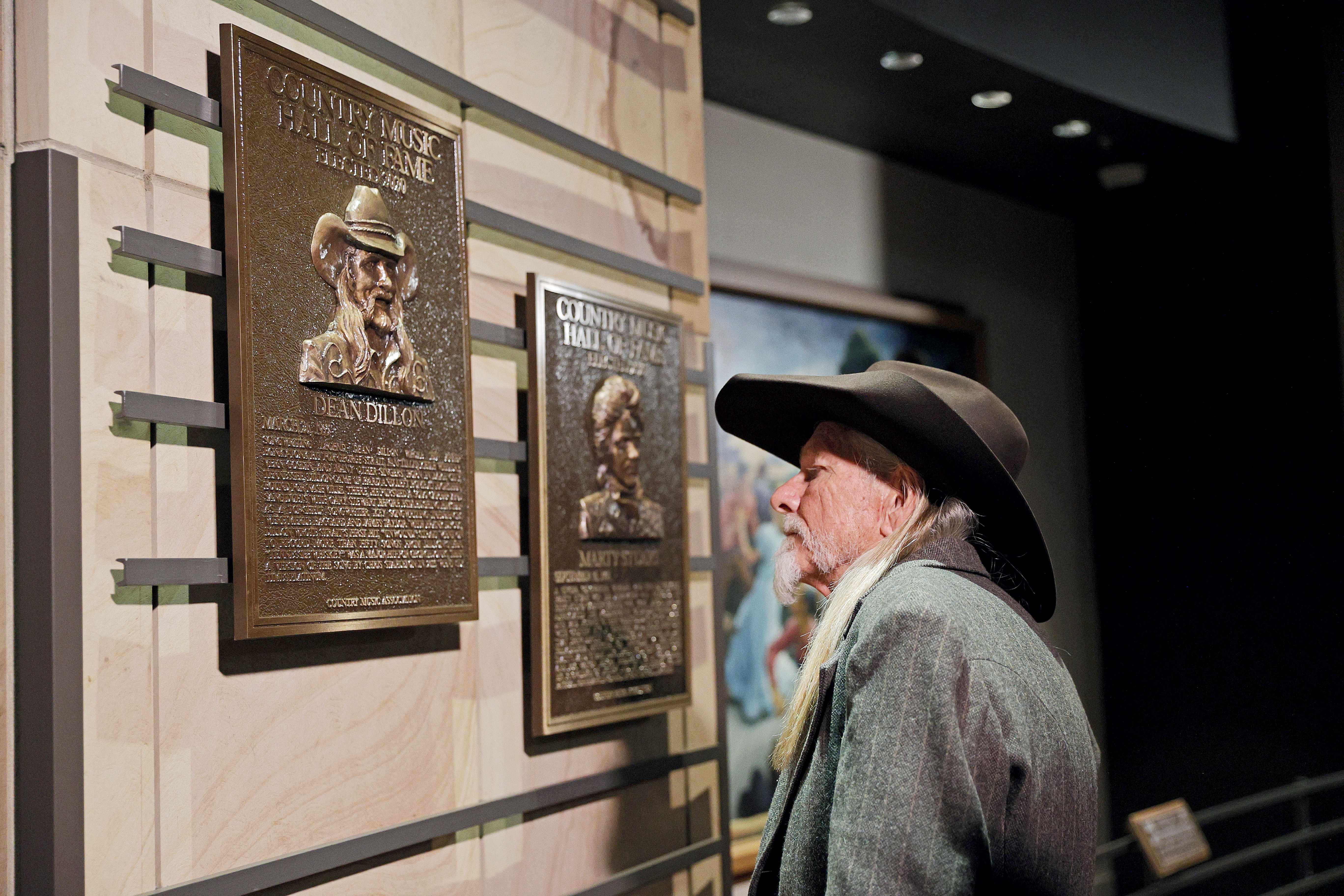 “You’re one of the greatest songwriters, most unsung songwriters, in country music,” Shooter Jennings said of Williams. “There were twelve records that started with Hank Williams Jr. and Friends and ended with Major Moves, and that’s the greatest run of records in any genre that anyone has ever done, in my opinion.”

Eric Church followed with an intense solo rendition of “A Country Boy Can Survive,” a #2 hit in 1982 and one of Hank Jr.’s signature songs. Church told of listening obsessively to Hank Williams Jr. with his younger brother, now deceased. “When I sit here tonight, it’s all about honoring Hank, but it’s also because I’m thinking about my brother,” he said. He then altered the introduction of the song to refer to his brother and highlight how Williams’s music inspired Church to follow his dreams and pursue country music as a career.

Hall of Fame member Alan Jackson followed, bringing out his band, the Strayhorns. He recalled performing Williams’s songs “a million times in bars” as he was getting started. “People always connect you with rowdy and getting crazy stuff, but man you’re a great songwriter,” Jackson said. “You write some sweet things, and great things. It ain’t all party stuff. It impressed me, and your music helped lead me to Nashville, and I appreciate it.”

Jackson and the Strayhorns presented a slow, stirring version of Williams’s “Blues Man,” an autobiographical song Williams wrote and recorded in 1980. Jackson included it on his 1999 album, Under the Influence, and released it as a single.

Country Music Hall of Fame member Brenda Lee inducted Williams. Lee recalled that her first hit, “Jambalaya,” recorded when she was ten years old, came from the Hank Williams catalog. She recalled meeting Hank Jr. at the Williams family home in Nashville when he was around twelve years old, five years younger than Lee, and how he attended the same school as her brother. She praised Williams for steadfastly following his own musical muse. “He is one of the few people in this industry that I can truly say had all the [connections], but he never used them,” she said. “As the song says, he charted his course, and he did it his way.”

Williams, dropping to one knee so the diminutive Lee could place the medallion around his neck, beamed as he stepped to the podium. After saying his late manager and mentor Merle Kilgore would have wanted him to flash his expensive rings, Williams put on a couple of more rings and held up glittering fingers to the crowd. In closing, he name-checked three of his famous songs, saying, “All my rowdy friends are coming over tonight, I was born to boogie, and this”—he said pointing to his Hall of Fame plaque—“is a family tradition.” 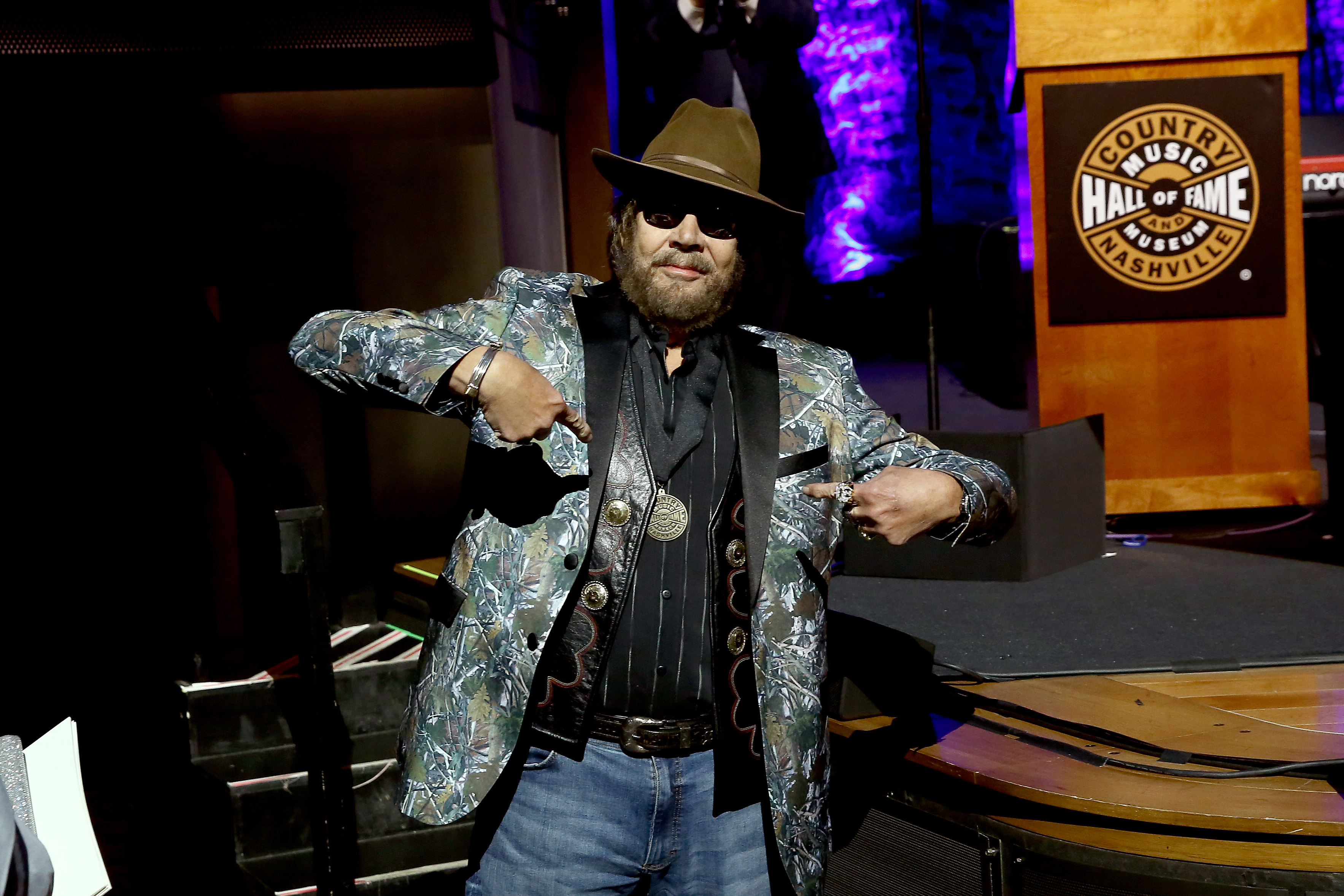 The Medallion Ceremony’s traditional finale, a performance of “Will the Circle Be Unbroken,” was led by Connie Smith and the Medallion All-Star Band with Deanie Richardson featured on fiddle, as the crowd sang along. The performance proved a fitting end to an evening that repeatedly highlighted the broad range of talent, from legends to newcomers, that characterizes the country music community. The circle not only remains unbroken, it is ever widening.