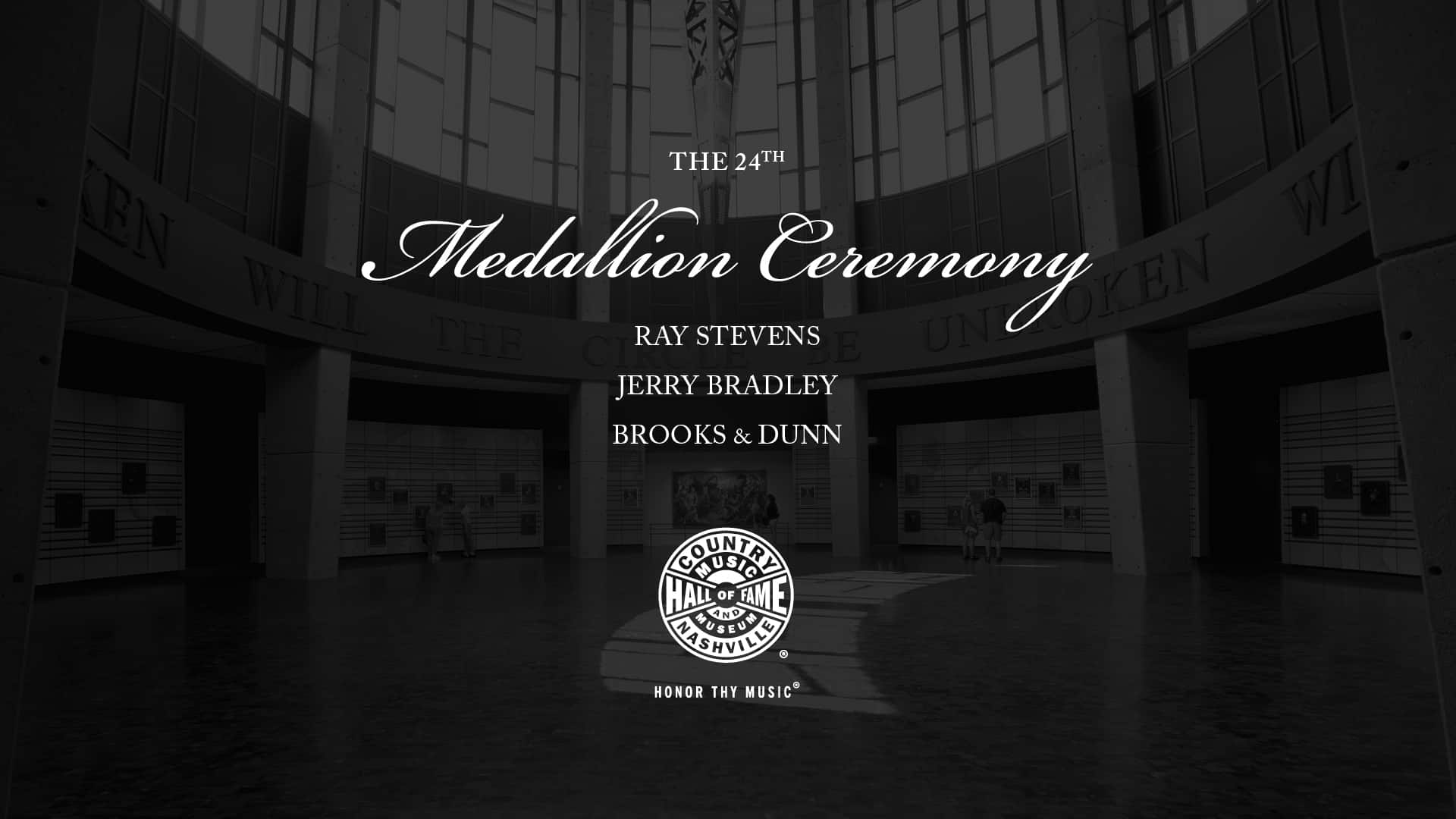 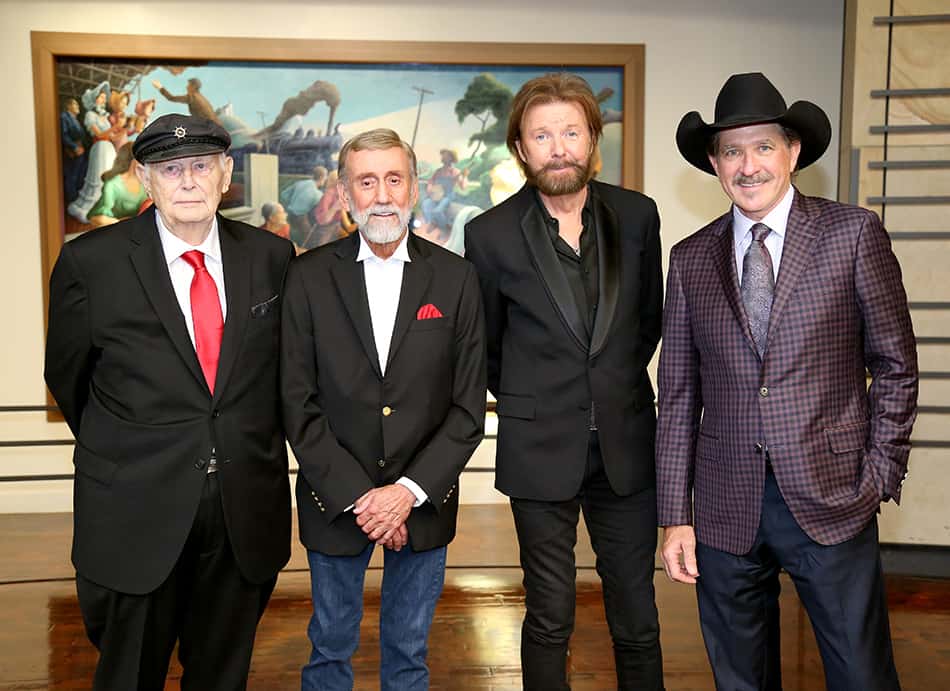 “Nobody chooses to be up here,” Stevens said. “We can dream about it, but we can’t plan on it. We can’t choose it. We have to be chosen. And let me say how sweet it is to be chosen to be here tonight.”

Considered country music’s most prestigious event, the Medallion Ceremony celebrates the moment when inductees officially become members of the Country Music Hall of Fame. The ceremony accentuates the special talents and achievements that have made each new member deserving of country music’s highest honor. Produced by the Country Music Hall of Fame and Museum, the program includes emotional speeches, musical tributes by surprise guests, and video biographies created by museum staff. The videos feature rare recorded performances, televised interviews, and historic photos culled from materials collected, stored, and digitized in the museum’s Frist Library and Archive.

To recognize the Hall of Fame members who had died since the last Medallion Ceremony, the audience observed a moment of silence in memory of Harold Bradley, Maxine Brown of the Browns, Roy Clark, Fred Foster, and Mac Wiseman.

Kyle Young, CEO of the Country Music Hall of Fame and Museum, emphasized Stevens’s talents as an arranger, multi-instrumentalist, music publisher, record producer, singer, and songwriter of songs both heart-tugging (“Everything Is Beautiful”) and comic (“The Mississippi Squirrel Revival”).

In honoring Stevens, who was elected in the veterans category, Young cited a quote by longtime Warner Bros. executive Martha Sharp: “I was fascinated to see anybody that talented. I was blown away by Ray Stevens and what he could do. He did everything.”

Stevens’s musical tribute began with Skaggs performing “Misty,” highlighting  Stevens’s transformation of a pop ballad into an up-tempo romp that mixed bluegrass instruments with bass, drums, electric guitar, piano, and harmony vocals. Bilbrey partnered with Gregory to bring Stevens’s witty crossover hit “The Streak” to life. Bilbrey filled the role of the interviewer, and Gregory played the flustered fellow who keeps encountering a streaker and repeatedly admonishes his wife Ethel not to look—but she always does.

The segment ended with the McCrary Sisters turning “Everything Is Beautiful” into a testifying, roof-raising vocal workout. In a serendipitous turn, as young children, Ann, Deborah, and Regina McCrary were members of the children’s chorus on Stevens’s original recording in 1970.

Emery inducted Stevens. In his speech, Emery talked of lobbying other Hall of Fame members to vote for Stevens and proudly welcomed his friend, saying, “He is really overdue for the award we are going to give him this evening.”

Stevens reiterated that many friends articulated the same viewpoint. “They’d come up to me and say, ‘Well, it’s about time,’” Stevens said in accepting the honor. “I’d say, ‘Anytime is a good time to be inducted into the Country Music Hall of Fame.’”

As might be expected, Stevens slid some humor into his speech. “You know, I’ve been thinking about that,” he said. “If you guys had got me in here a little sooner, I could have upped my price for booking dates.”

Inducted in the non-performer category, Bradley listened as Young said Bradley grew up as Music City royalty, because his father and uncle are considered architects of the Nashville music community. But Jerry Bradley emerged from the shadow of his father, Owen Bradley, and his uncle, Harold Bradley, both of whom are members of the Country Music Hall of Fame.

“He established himself as a force in country music,” Young said, “not through bloodline, but through action and invention.”

Marty Stuart and Travis Tritt, who recorded several hit duets in the 1990s, began the musical tribute to Bradley by joining forces on “Good Hearted Woman,” originally recorded by Waylon Jennings and Willie Nelson. Bradley masterminded the Jennings–Nelson duet, splicing together old studio recordings of the two Hall of Fame members. Bradley added an applause track so it sounded like a live recording, and made the patchwork recording the centerpiece of Wanted! The Outlaws, the first country music album to receive platinum certification from the RIAA, signifying more than a million in sales.

“[Bradley] has been a great force for country music and for Nashville,” said Bud Wendell, who inducted Bradley. “He’s a great leader, and it takes a great leader to achieve the things he has accomplished.”

Bradley, in his acceptance speech, said, “This business has given me a wonderful life. I’m grateful for the people I met, the songs I heard, and the part I played.”

In detailing the careers of Brooks & Dunn, this year’s modern era inductees, Young recalled that the two men had pursued individual solo careers for more than a decade before reluctantly agreeing to form a duo. Arista Records executive Tim DuBois surprised them with the offer of a record deal on the condition that they work as a duo. They agreed, but both thought the unexpected partnership would be short-lived. Even after piling up #1 hits, platinum records, and industry awards, they kept expecting to fall from grace.

In his comments, Young quoted Brooks as the singer recalled his skepticism about forming a duo. “The chances of this thing lasting were just not very good,” Brooks has said. “I mean, we just looked at each other, and what was going on, and at all the potential conflicts . . . It was like, ‘I don’t see a lot of longevity here.’”

Young added: “We can all happily agree that Kix was wrong.”

John and T.J. Osborne, known as Brothers Osborne, opened the musical tribute with a reverent take on “Brand New Man.” Luke Bryan convincingly expressed the subtle emotions of the nostalgic narrative “Red Dirt Road.” Trisha Yearwood delivered an incredibly powerful, nuanced take on “Believe” that brought everyone to their feet. 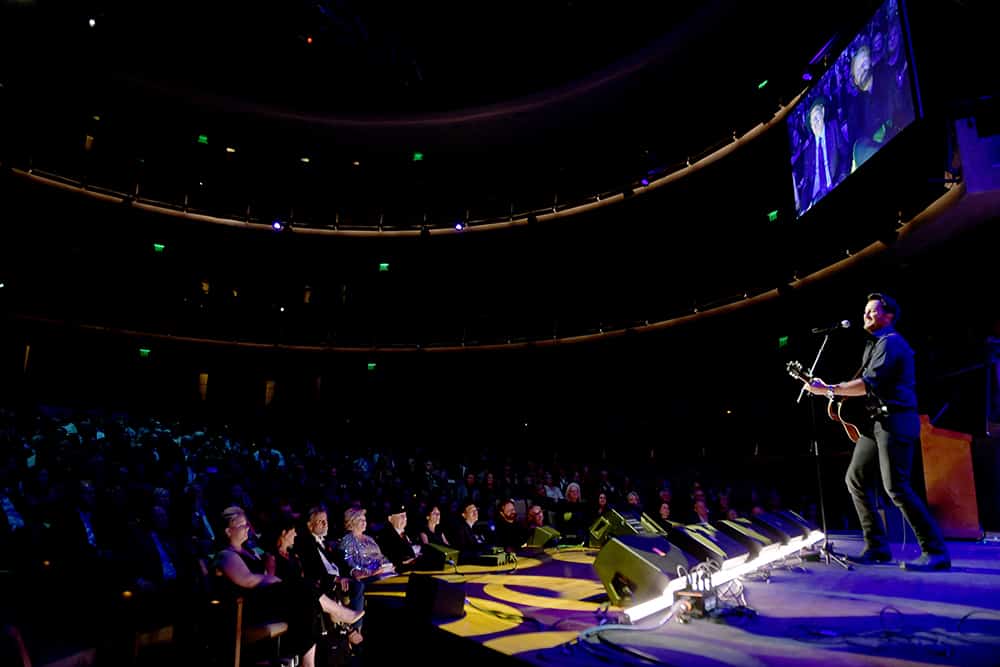 Reba McEntire inducted her longtime friends Brooks & Dunn, calling them “wonderful people.” Between jabs about how she bickers with them, she said she related to them as her brothers. She noted that she recorded hit songs the duo, toured with them for four years in the 1990s, and in 2015, she convinced them to reunite and co-headline a series of concerts in Las Vegas with her—a residency series that has become an annual event.

In his acceptance speech, Brooks recalled how Merle Haggard, a hero of his and Dunn’s, sat him down in 2010 during Brooks & Dunn’s farewell tour and strongly suggested Brooks & Dunn should not give up on a successful creative partnership. A few years later, Haggard reiterated the sentiment, asking Brooks when he planned to get back together with Dunn.

“Son, you don’t understand,” Haggard told Brooks. “You two got a thing. You can’t put your finger on it, but y’all got a thing, and you can’t waste that.”

In closing, Brooks looked to Dunn at his side, and said, “I think we realize now how lucky we are.”

Dunn offered a humorous speech about his tendency to overanalyze events in his life, and he pointed out that his therapist was in the crowd. He admitted he went to sleep the previous night with the voices of “munchkins” in his head, and he awoke with the same voices, which were repeating, “Follow the yellow brick road.” Dunn paused and said, “I think that’s what I did.”

Then, in a more serious tone, he said, ‘I’ve never been so proud and humbled. And if you don’t believe that, just step into my heart right now.”

The evening’s traditional finale, a performance of “Will the Circle Be Unbroken,” started with McEntire singing the first verse a cappella. On the chorus, the McCrary Sisters joined her as the band kicked in behind them. Regina and Ann McCrary took turns singing additional verses, while all five vocalists (and the crowd) sang along on the choruses.

The performance proved a fitting end to an evening that repeatedly highlighted the diversity of talent that makes up and feeds into the country music community. The circle not only remains unbroken, it is ever widening. 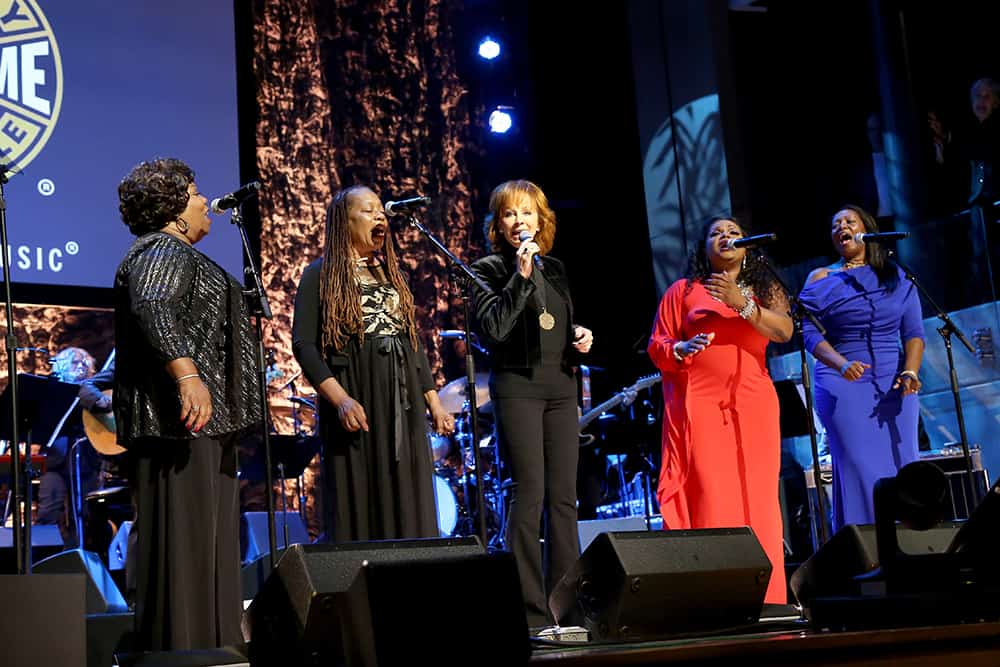