Film Premiere, Conversation, and Performance: The Earls of Leicester 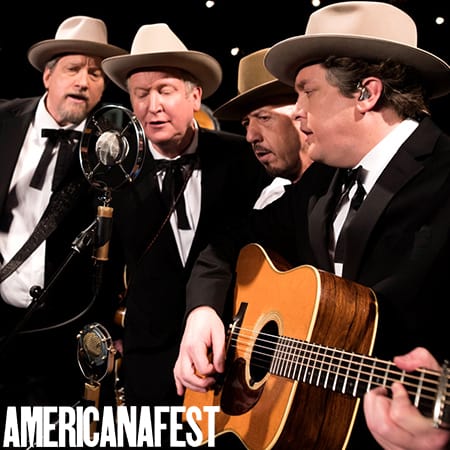 In 2018, the Earls of Leicester performed two historic shows at the museum’s CMA Theater that were released on CD and vinyl later that year as the double album Live from the CMA Theatre in The Country Music Hall of Fame. These performances were also captured for a live film of the same name, which will premiere at this event, with commentary and a brief performance by the band. The Earls of Leicester formed to preserve and promote the legacy of bluegrass legends Lester Flatt and Earl Scruggs. Their debut album won a Grammy, and the group and its members have earned multiple awards from the International Bluegrass Music Association (IBMA), including Entertainer of the Year. The band includes all-star performers Jerry Douglas (Dobro), Barry Bales (bass), Shawn Camp (guitar/lead vocals), Charlie Cushman (banjo), Johnny Warren (fiddle/bass vocals), and Jeff White (mandolin/tenor vocals). Warren’s father, Paul Warren, played fiddle for Flatt & Scruggs’ Foggy Mountain Boys, and Johnny Warren plays his father’s fiddle in the Earls of Leicester. Presented in partnership with the Americana Music Association. Ford Theater. Included with museum admission. Limited seating. Museum members and AmericanaFest badge holders may reserve program tickets starting on August 23 at 10AM CST.