Conversation and Film: Nitty Gritty Dirt Band and Making of Will the Circle Be Unbroken Volume II 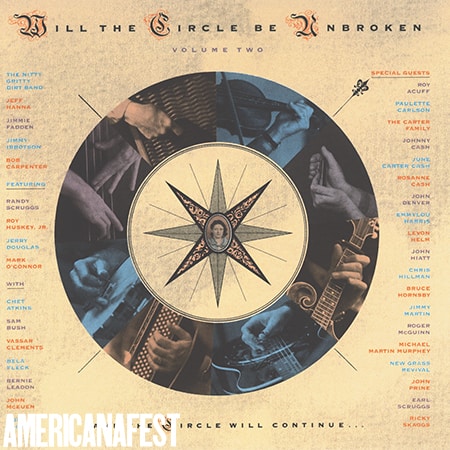 Nitty Gritty Dirt Band co-founder Jeff Hanna and progressive bluegrass pioneer Sam Bush will screen clips from the rarely seen 1989 documentary Making of Will the Circle Be Unbroken, Volume II. Long out of print, the film shows the Dirt Band in the studio with legendary country performers as well as with artists who are now considered to be the foundation of modern Americana music, including Rosanne Cash, Jerry Douglas, John Hiatt, New Grass Revival (including Sam Bush), and Mark O’Connor. Celebrating its thirtieth anniversary this year, Will the Circle Be Unbroken, Volume II won three Grammy awards and a CMA award for Album of the Year. Hosted by Craig Shelburne and presented in partnership with the Bluegrass Situation and Americana Music Association. Ford Theater. Included with museum admission. Limited seating. Museum members and AmericanaFest badge holders may reserve program tickets starting on August 23 at 10AM CST.