Big night (at the Museum)

We're grateful to the artists, our partner YouTube, and to the music fans who tuned in Wednesday evening, October 28, to help make our musical celebration and digital fundraising event, BIG NIGHT (At the Museum), a success.

More than $743,000 was raised for the Country Music Hall of Fame and Museum’s Coronavirus Relief Fund during the premiere of BIG NIGHT, and all of those donations help sustain the Museum and its mission of preserving and protecting country music history. 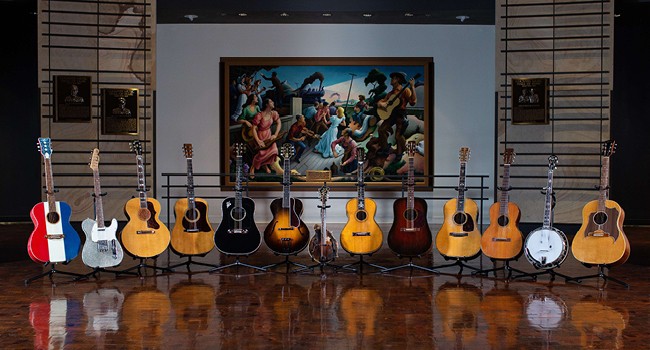 The entire BIG NIGHT (At the Museum) program, as well as individual performances from the film, are now available to view on demand on the Museum’s YouTube channel. We invite those who have not yet had a chance to watch to tune in and learn more about the Museum, our mission, and the work we're proud to do.

Anyone who'd like to contribute to our fundraiser can still make a donation via YouTube Giving, or by texting “Donate” to (833) 977-2643.

Add to your BIG NIGHT (At the Museum) excitement by heading to our online store to grab fittingly original keepsakes.
Up for auction: a high-end Gibson acoustic guitar signed by BIG NIGHT contributors. Up for sale: an original poster designed by Nashville's own Hatch Show Print.

BIG NIGHT (At the Museum) has generated support for the museum and its work with exhibitions, collections preservation and educational programming. Since the museum closed in mid-March due to COVID-19, it has suffered significant financial losses and has been forced to cancel many of its planned educational events. Following BIG NIGHT (At the Museum), donations are still welcomed via YouTube Giving and a text to donate option: text ‘Donate’ to (833) 977-2643.

The pandemic created a unique set of circumstances that allowed museum staff to safely remove historic instruments from exhibit cases and be played. For BIG NIGHT (At the Museum), instruments, artists and songs were carefully matched to highlight personal and artistic connections.

The War and Treaty pays tribute to Ray Charles

The event is hosted by Marty Stuart, with audio supervision by Dave Cobb.

BIG NIGHT (At the Museum) in the Media

"CBS This Morning: Talk of the Table" – CBS

"On 'BIG NIGHT at the Museum,' country music's precious artifacts get to sing again" – Tennesseean