Flatt and Scruggs and the Foggy Mountain Boys did much to popularize bluegrass music. 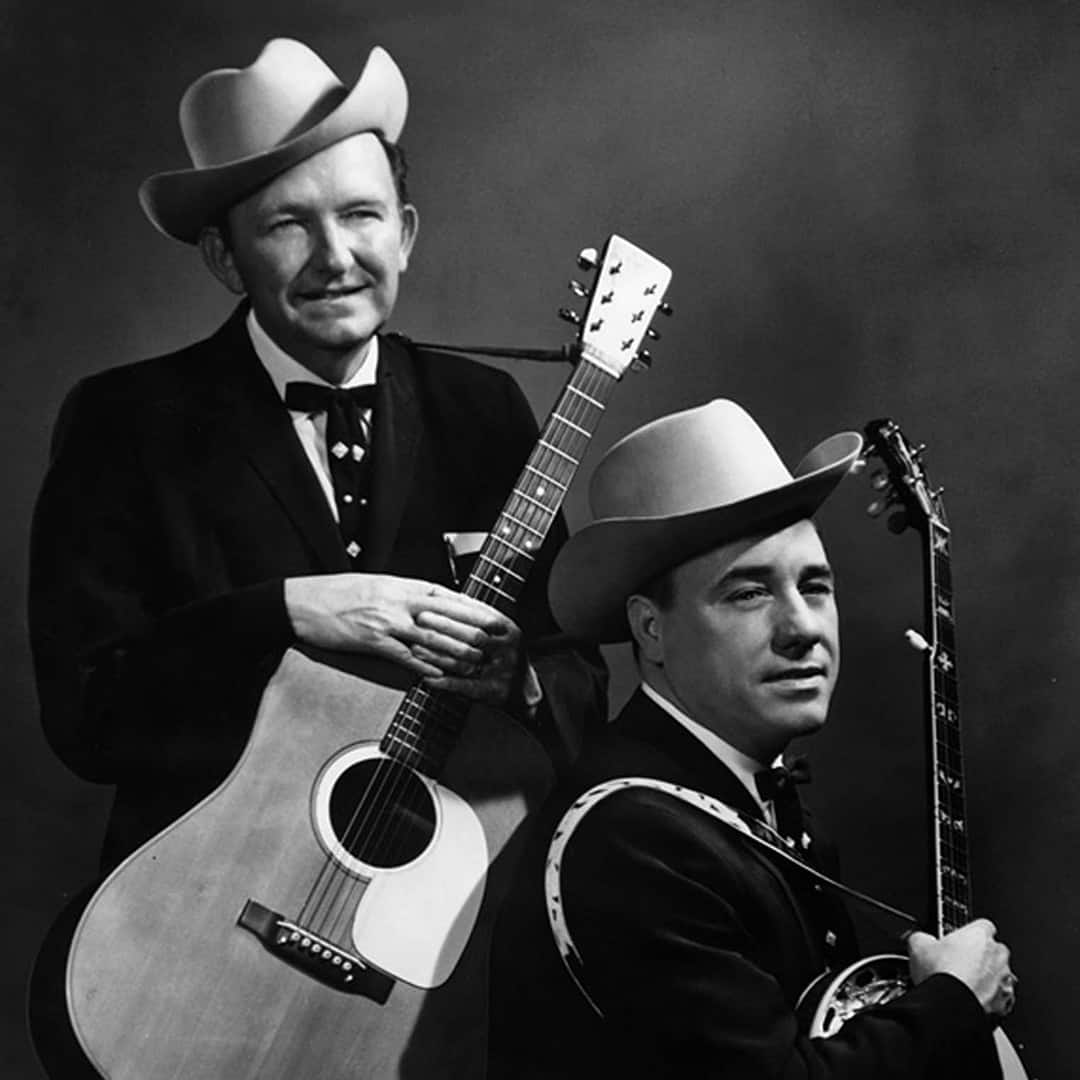 Their sound became widely recognized in the 1960s through their recording of “The Ballad of Jed Clampett,” the theme for the network television show The Beverly Hillbillies.

Both Flatt and Scruggs grew up in rural farm homes immersed in rich musical traditions. Both worked in textile mills before becoming full-time musicians. Flatt, who left school at the age of twelve and married at the age of seventeen, began his radio career in 1939 and worked in several bands, including that of Charlie Monroe and his Kentucky Partners, with whom, in 1943, he sang tenor and played guitar and mandolin. In 1945, Flatt was hired as guitarist and lead singer in Bill Monroe’s Blue Grass Boys.

Scruggs, who remained close to home through the war years to help his widowed mother, was recognized from an early age as a banjo prodigy. By the time he was a teen, he had developed his own distinctive, banjo style that enabled him to play a broad variety of music with speed and clarity.

The two met in 1945 when Scruggs joined the Blue Grass Boys, and both became part of what proved to be Monroe’s most influential lineup. Along with fiddler Chubby Wise and bassist Cedric Rainwater (real name: Howard Watts), Flatt and Scruggs played a crucial role in the development of the sound that later came to be known as “bluegrass”—a name taken from the band’s name. In addition to Monroe’s high tenor vocals and fiery mandolin playing, this sound featured Flatt’s warm lead singing and solid rhythm guitar. Perfecting a “roll” executed with the thumb and first two fingers of his right hand, Scruggs used the banjo as a lead instrument like a fiddle or a guitar, particularly on faster pieces and instrumentals. This novel sound attracted considerable attention to their Grand Ole Opry performances, road shows, and Columbia recordings.

Early in 1948, Flatt and Scruggs left Monroe. Later that spring they formed their own band, the Foggy Mountain Boys. Early band members included guitarist/vocalists Jim Eanes and Mac Wiseman, along with fiddler Jim Shumate and Rainwater. By the end of the year, they were playing at WCYB in Bristol, Tennessee, and recording for Mercury. Subsequently they worked at a number of other radio stations in the Southeast. In 1950 they signed with Columbia, the label they would be with for the rest of their career together.

In 1949 mandolinist/tenor singer Curly Seckler joined the band. He remained for most years until 1962, although for several periods he was replaced by others, most notably Everett Lilly. A number of outstanding fiddlers played with the band in its early years; in 1954 master fiddler Paul Warren joined and remained with the band for the rest of its history. A number of bassists worked with the band before 1953, when E. P. “Cousin Jake” Tullock joined. He too remained until the end. The Flatt & Scruggs sound took its definitive form in 1955 with the addition of the Dobro resonator guitar of Buck “Uncle Josh” Graves. With this instrument, they departed significantly from Bill Monroe’s sound, although, like him, they maintained a purely acoustic sound.

In 1953 Martha White Flour began sponsoring Flatt & Scruggs’ daily early morning radio shows over WSM-Nashville and continued to support them for the rest of their career. In 1955 they became members of the Grand Ole Opry. During the late fifties and early sixties their syndicated television shows were seen by millions of viewers in the Southeast. Their recordings, including gospel songs like “Cabin on the Hill,” began hitting the country charts. Meanwhile, their banjo-sparked acoustic sound found favor with young listeners in the folk music revival. Appearances at the Newport Folk Festival and on national TV brought them national acclaim (New York Times music critic Robert Shelton compared Scruggs to master violinist Niccolò Paganini) paving the way for a series of folk-oriented albums. An appearance at the Hollywood folk club The Ash Grove caught the ear of the producer of The Beverly Hillbillies and led to “The Ballad of Jed Clampett,” their only single to reach #1 on the country charts.

The early sixties was a time of great popularity for the group. And while later in the decade there were health problems for both men, particularly Flatt, they continued to tour and broadcast widely. Highlights from these years included their sensational appearance in Japan, an appearance at San Francisco’s Avalon Ballroom during the peak of its hippie light show years, and another sound track success when their 1949 recording of “Foggy Mountain Breakdown” was used in the 1967 movie Bonnie and Clyde.

Musical and business differences brought the act to an end early in 1969. Both men continued to perform, Scruggs with his sons in the Earl Scruggs Revue, and Flatt with his Nashville Grass. In 1985 Flatt & Scruggs were elected to the Country Music Hall of Fame. – Neil V. Rosenberg