All for the Hall Los Angeles 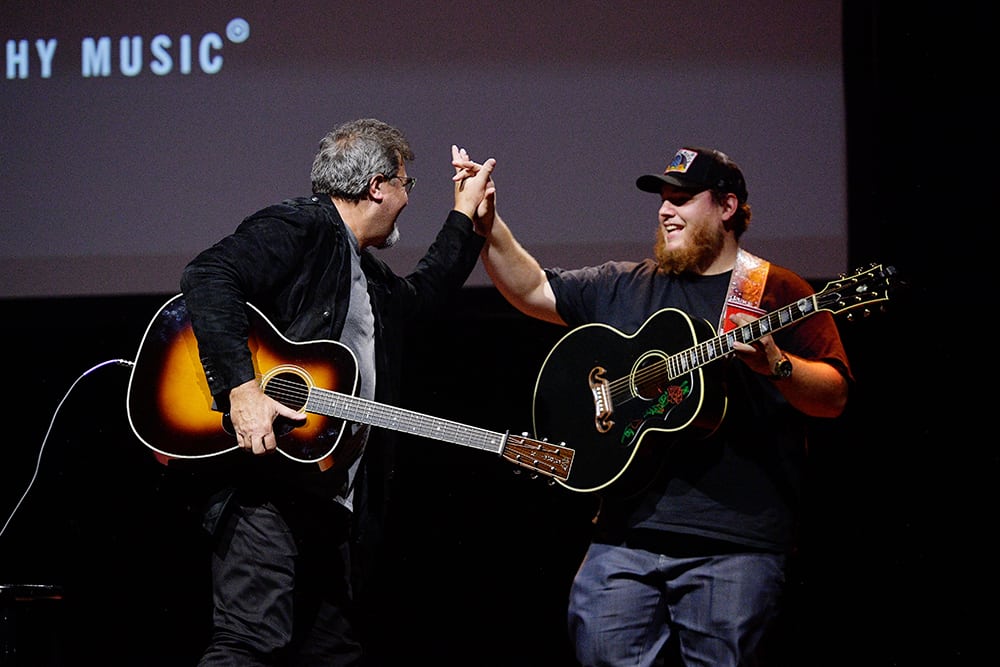 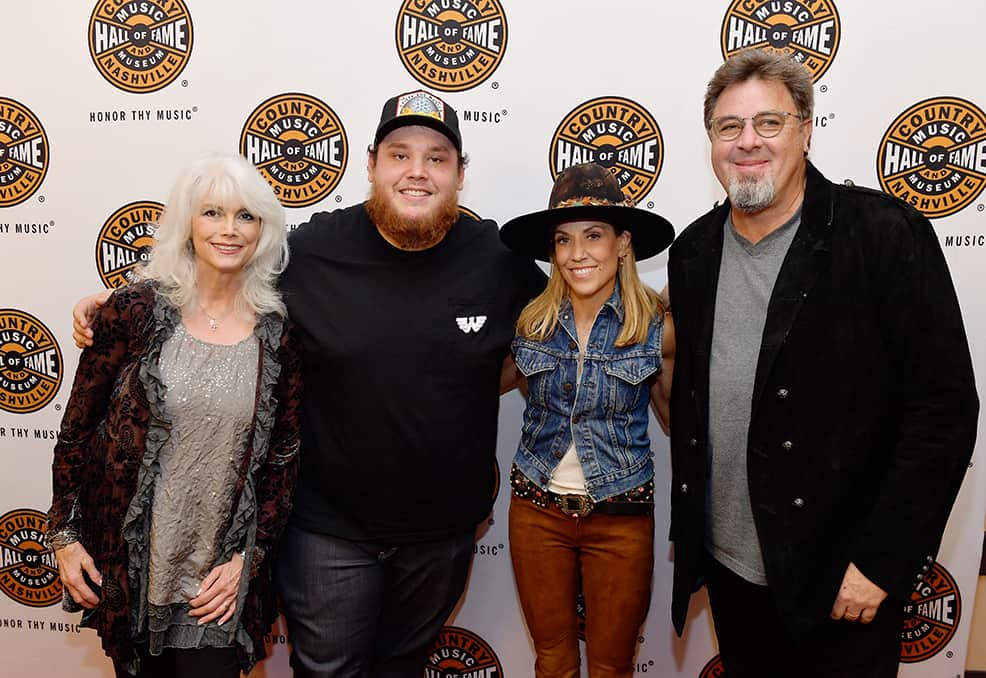 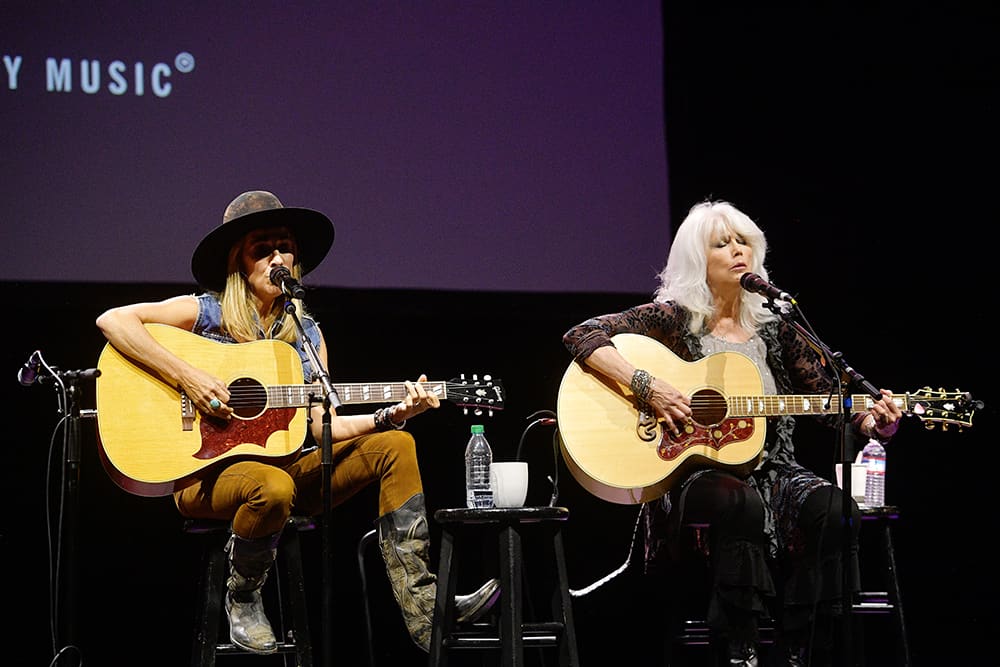 LUKE COMBS, SHERYL CROW, VINCE GILL, AND EMMYLOU HARRIS SHARE SONGS AND STORIES FOR ALL FOR THE HALL LOS ANGELES, IN SUPPORT OF THE COUNTRY MUSIC HALL OF FAME AND MUSEUM’S MUSIC EDUCATION MISSION

LOS ANGELES– Luke Combs credits the musical education he received while attending public schools in Asheville, N.C., for setting him on a path that led him to become one of the hottest new contemporary country stars. "Music education is something that’s very near and dear to my heart,” Combs said, naming a music teacher and the school’s marching band instructor, a married couple, as the most important teachers in his life. “I wouldn’t be here without [them].”

Sheryl Crow, before she became a recording artist, taught music classes in an elementary school in one of the most impoverished neighborhoods in St. Louis, and she feels strongly that those classes gave her students an outlet for creative expression that otherwise would have been expressed in less nurturing ways.

Combs and Crow joined Vince Gill and Emmylou Harris, longtime hosts of the Country Music Hall of Fame and Museum’s All for the Hall benefit concert series, forming an all-star lineup that reached across generations and genres to perform for an enthralled audience at the packed The Novo theater in downtown Los Angeles on September 17, 2019.

The All for the Hall initiative began in 2005 when Gill, president of the museum’s Board of Officers and Trustees, began a campaign to encourage fellow artists to get more involved in fundraising for the Country Music Hall of Fame and Museum. To date, the All for the Hall concerts in Los Angeles, Nashville, and New York have netted more than $4.5 million in support of the museum’s educational programs.

The song, the fifth involving volunteers Barton and Rose as songwriting teachers, found the students acting out the lyrics with choreographed movement and thoroughly engaging smiles as they harmonized about uniting to take care of the earth and to treat others with kindness and compassion.

The lyrics, set to a swaying upbeat rhythm, included lines of compassion as well as humor. They juxtaposed stanzas such as:

If they just put us in charge

To spread kindness in every heart

The homeless would all have a home

And nobody would suffer alone

And while we’re at it, wouldn’t it be fun

To give pizza and ice cream to everyone

The students drew the only standing ovation of the concert. The charming performance underlined the primary intent of the evening: to fund and uplift the museum’s educational work, a core component of the museum’s mission.

The students’ heart-tugging composition set the tone for an evening that leaned as much on new songs of family and human connection as it did on well-known hits. Gill and Crow emphasized songs from just-released albums, while Combs and Harris both offered new tunes they recently had written and had not performed before an audience.

As the museum’s Vice President of Development, Education, and Community Outreach, Lisa Purcell stated in her introduction, “You will experience something that hasn’t happened before and likely will never happen again.”

Gill kicked off the evening by reviving his first performance in Los Angeles, back in 1976 at the historic nightclub the Troubadour. Gill recalled that he chose his opening selection, “Til I Gain Control Again,” without knowing the song’s writer, Rodney Crowell, and Harris were sharing a table in the audience. Gill, then just nineteen years old, met them both that night, securing two of his most treasured lifelong friendships.

Instead of performing separate sets, the four performers joined each other on stools across the stage. The gathering gave the audience a glimpse into a “guitar pull,” a Nashville tradition where artists sing one song, then concede the microphone to the next songwriter. The exercise allows every songwriter in the room, whether legend or newcomer, a chance to share his or her work.

When his turns came, Gill offered a couple of new songs, “A World Without Haggard” and “A Letter to My Mama,” from his new album, Okie. He also performed a beautiful, slowed-down take on “Whenever You Come Around,” a song about his wife Amy Grant that beautifully acknowledges his feelings for her before they became a couple.

In introducing Combs, Gill jokingly recognized that Combs, as a young star, received an invitation to perform at the event because his massive popularity would sell tickets to a different demographic than the veteran artists. For his part, Combs revealed the intimidation he felt when joining three veterans who hold such an esteemed position in the American music canon.

“Talk about a humbling experience, having to sit and watch these three sing their songs,” he said. “And then you have to come out knowing you’re the most inadequate musician here.”

He received plenty of support from the stars on stage, who talked about the power of his songwriting and his voice. Combs received the loudest applause of the night each time he was introduced. At one point, he gently chided the crowd, saying, “Calm the redneck down.”

Combs opened with a sensitive new song, “Dear Today,” written as a message to his future self. The song will appear on his second Sony Music album, scheduled for November release. For his other songs, he balanced recent hits, 2017’s “When It Rains It Pours,” which Crow pledged to record herself someday, and his breakthrough hit, “Hurricane,” with a new, as-yet-untitled song that speaks of how important his parents have been in making him the success, and the person, he is today.

Harris started her performance with a new song, “Home Sweet Home,” inspired by Nashville pastor Charles Strobel, who set up groundbreaking programs for the homeless, rescue animals, and teens as they transition from foster homes to living by their own means. She then sang two duets with Crow: “Juanita,” a song the two of them previously collaborated on for a tribute album to Gram Parsons, and “Evangeline,” citing the live recording of the song Harris did with the Band as part of the group’s final concert, captured for the ages by the film The Last Waltz. She also sang the somber “Old Yellow Moon,” written by former bandmate Hank DeVito and Lynn Langham.

Crow offered a couple of hits, “Everyday Is a Winding Road” and “If It Makes You Happy,” which found Harris, more animated than usual, throwing her arms in the air and shouting the chorus along with Crow. The rock singer also performed “Redemption Day,” which she has recorded several times, most recently as a duet with Johnny Cash on her new album, Threads, in which she combined the vocals from Cash’s version of the song, recorded shortly before his death, with her own voice and a new musical arrangement.

The proceeds from All for the Hall Los Angeles will be earmarked for the museum’s education department, which reached 100,000 students in 2018. The series is produced by museum board members Rod Essig, Ken Levitan, Gary Overton, and Jody Williams, along with Gill's manager, Larry Fitzgerald. The annual series has alternated between New York and Los Angeles, with Gill and Harris as hosts for every program. Gill, along with Keith Urban, also hosts a recurring All for the Hall concert series in Nashville. Each show is a one-of-a-kind concert that unfolds spontaneously and without a set list. For example, Crow rehearsed one of her most famous songs, but decided to play a different song after being inspired by the night’s other performances.

Learn More about All for the Hall